The Most Interesting Chapter in the Bible 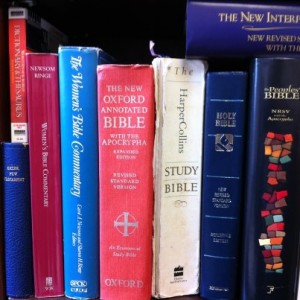 Yes, these are the parts of the biblical text that I tell students they can skip reading, since they’re what I call the “yada yada yada” of the bible.  The author’s way of saying:  time passes, stuff happens, let’s move on.

But if you remember Seinfeld as I do, George’s girlfriend ended up “yada yada-ing” the most important part of the story.

When it comes to this genealogy, I think it’s the most interesting part of the story.

In part this is because of the lengths to which the author goes to connect Jesus to the Hebrew tradition into which Christians believe he falls:  dating back to Abraham (not to Adam, son of God, like Luke’s genealogy), and structured to pivot around King David, and the deportation to Babylon.

Mostly, of course, it’s about the women.  There are five women named in this genealogy.  They are exceptional for two reasons:  1)  they are women, and women are never named in biblical patrilineal genealogies;  2)  they are not the matriarchs of the tradition, they are marginal and marginalized women. 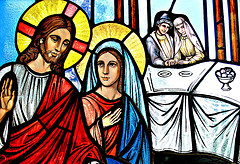 Here’s how I described them in a piece last year over at TheReligiousLeft.org:

Perez and Zerah by Tamar.

Salmon the father of Boaz by Rahab.

Solomon by the wife of Uriah.

Mary “of whom Jesus was born.”

These five are vulnerable women on the edge of society.  They are not the relatively empowered matriarchs Sarah, Rebecca, Leah, Rachel, or even Hannah.  They are women who engineer their own survival and the survival of their people despite the odds against them.  They do what it takes, even if it means sleeping with the father-in-law denying you your rights.  Or lying to protect spies who strike a bargain with you.  Or letting another woman raise your child because she has status and you do not.  Or doing what it takes to survive when the king demands to have you.  Or offering a fierce yes to God’s call.

None of the women are in situations that are ideal:  widowed, unmarried & pregnant, a public woman.  None of them are what we’d like to claim as mothers of the faith.  But they are.  God trusted them – women on the margins of social and sexual acceptability.  They made decisions and engineered their lives, all in less than ideal situations.

There’s also the unsolved riddle of how all the “father of –, father of –, father of” stuff gets us to Joseph, “the husband of Mary, of whom Jesus was born.”  Yet, according to later Christian tradition Joseph is NOT the biological father of this Jesus.  Ummmm?  So what IS the point of all the patrilineage, then?

I’d rather talk about the matrilineage anyway.