My Review of “Mormon Feminism” 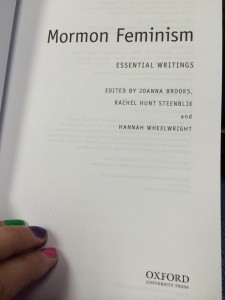 The new book, Mormon Feminism: Essential Writings, edited by Joanna Brooks, Rachel Hunt Steenblik, and Hannah Wheelwright is being released by Oxford University Press this month, and I consider it a must-read for anyone interested in constructive engagement at the intersection of feminism and religion. Here is an excerpt of my review of the book, which appeared first over at Feminism and Religion:

Mormon feminists experience what most feminists of faith have heard at some point. Utter dismissal of the possibility of their existence.

You can’t be Christian and feminist.

There’s no such thing as a Catholic feminist.

You can’t seriously be Jewish and feminist.

You can’t possibly be Muslim and feminist.

To be Mormon and feminist? Preposterous.

In response, scholars, activists, and writers within each tradition have had to document their history, make their theological case, and engage their scriptures as robustly as any conservative traditionalist would. In order to achieve meaningful institutional change, unimpeachable work and confident testimony is required.

The new volume, Mormon Feminism: Essential Writings, edited by Joanna Brooks, Rachel Hunt Steenblik, and Hannah Wheelwright is destined to be a new core text on the subject of whether and how one can (and should) be a Mormon feminist. It combines history, theology, memoir, poetry, collective statements, and personal essays from generations of women who refuse to let the tradition that gives them life be defined by those who would exclude them from its most venerated spaces. The authors claim voice, define space, and deconstruct arguments with the boldness required to be part of this distinctly American pioneer religious tradition.

Joanna Brooks’ introduction alone makes a clear case for Mormon feminism, while naming key aspects of doctrine and practice that “offer mixed or contradictory messages about gender, equality, and power.” And, rather than being merely a defensive argument or an apologetic case, Brooks constructively connects Mormonism and feminism on matters of substance and vision:

“Many of us identify as feminists because the feminist’s movement’s hunger for justice and positive change aligns with our own religious feelings as Mormons that the purpose of life is to work for the betterment of humankind, the creation of a Zion community of equals. … Both Mormonism and feminism value struggle or work as necessary to growth.”

The final section of the book reveals a religious feminism come-of-age, one reckoning with the intersection of race and class with its particular brand of patriarchy. As womanist writer Gina Colvin puts it:

To read the rest of the review, click here.

For more of my blog posts on Mormon feminism, click here. 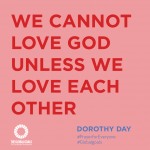 September 24, 2015
Gender Equality & the #GlobalGoals as a #PrayerforEveryone
Next Post 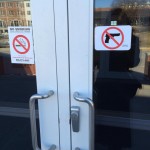 October 6, 2015 Guns, Masculinity, a Culture of Life, & Educators on the Front Line
Recent Comments
0 | Leave a Comment
"They were all too aware of human perversions then and in the age before. Genesis ..."
Bob Shiloh How Gender Studies Transforms Religions
"I have Eve Wood-Langford's book in my personal library. I bought it because I was ..."
Walter Mattfeld The Most Interesting Chapter in the ..."
"You guys aren’t even close to Christians. You believe you’re better than Christ and can ..."
Kyle Racism, Sexism, & The Holiday Classics
"Even as a reverent agnostic, yet assuming a genuine divine revelation, I wonder how that ..."
John Gills How Gender Studies Transforms Religions
Browse Our Archives
Related posts from Caryn Riswold