7 Important Bible Verses About The Antichrist

The Antichrist has long been a biblical character that people want to learn more about. Throughout the years, many people have tried to predict who it is going to be, or even who it is currently. From people guessing it’s President Obama, political figures, etc. it’s clear that many people have some false thoughts about the Antichrist. So, just who is this mysterious and evil Bible character? Here are 7 important bible verses about the antichrist.

2 Thessalonians 2:3-4 “Let no one deceive you by any means; for that day will not come unless the falling away comes first, and the man of sin is revealed, the son of perdition, who opposes and exalts himself above all that is called God or that is worshipped, so that he sits as God in the temple of God, showing himself that he is God.”

With these two verses, volumes are taught about the Antichrist. Most obviously, it is clear that he is not an admirable or trustworthy person. All of this is happening in a time of deception. He’s described as a man of sin (which, in case you didn’t realize, is bad!) who takes people away from worshipping the true God and makes them worship him instead (pretending to be God).

Even if you don’t understand this verse fully, you still get the point; there’s bad stuff going on! You get the feeling that the antichrist is one that is pretty good with words and is able to persuade people to do whatever he wants. He’s persecuting those who believe in the true God and he’s trying to change laws for his own benefit.

Revelation 13:3 “And I saw one of his heads as if it had been mortally wounded, and his deadly wound was healed. And all the world marveled and followed the beast.”

At some point, it appears that the Antichrist suffers some type of deadly wound and appears to be raised from the dead. Perhaps it’s not an actual raising from the dead, but the point is he was severely hurt, to the brink of death, and was able to recover, which gains him widespread fame and a huge following.

Although the Antichrist will be utterly horrendous, this verse speaks of antichrists that have already been here; they are a foreshadowing, so to speak, of what is to come. Some people have given names like Hitler and Stalin as these mini-antichrists who foreshadow an even more evil man, the Antichrist.

1 John 2:22 “Who is a liar but he who denies that Jesus is the Christ? He is antichrist who denies the Father and the Son.”

Here, it is clear that the antichrist will deny Jesus Christ and the Father and being legitimate. Instead, as we learned in other verses, he will make people worship him as God.

17 Quotes About The Love Of God

Once again, he will be a person who can speak quite eloquently. However, something here seems to suggest that he’s not the ultimate one in power. Consider that it says “he was given authority.” This, of course, implies that he was not acting alone and in his own power! 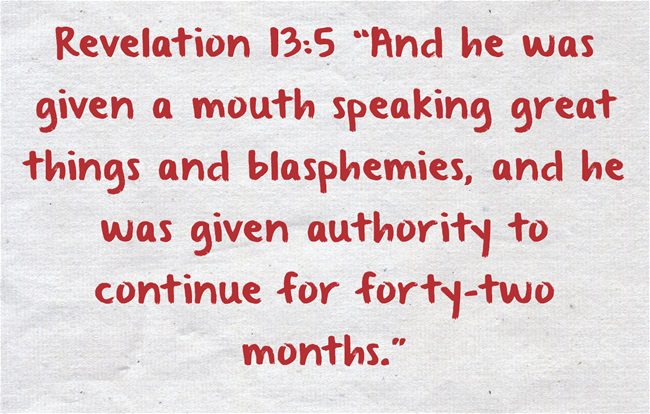 Daniel 7:24 “The ten horns are ten kings who shall arise from this kingdom. And another shall rise after them; he shall be different from the first ones, and shall subdue three kings.”

Apparently, he is smart and powerful enough to subdue three different kingdoms. Also, consider the fact that the kings that were mentioned were not puny at all; they were actually quite powerful. But, the antichrist will be far more powerful!

Despite people really hoping (for some odd reason) that the antichrist is Obama, George Bush, or even the Pope, the biblical text never reveals the actual name of the person. The Scriptures paint a picture as to what he will be like and what the time in which he comes to power will be like. So, it’s important to get any knowledge of the antichrist straight from the source—The Word of God.

October 31, 2014
What Does The Color Purple Mean Or Symbolize In The Bible
Next Post

How the Loss of Family &...
Cranach
Related posts from Christian Crier