Since Satan is called the “god of this world,” how does God still have control over his actions?

The “god” of this World

A quick glance at the news should tell us all we need to know about the state of this world. Violence, as in the days of Noah, is growing worse, but there’s a sinister minister behind it all. For example, the Apostle Paul wrote that “if our gospel is veiled, it is veiled to those who are perishing” (2 Cor 4:3), and the reason the gospel is veiled to the world is because “the god of this world has blinded the minds of the unbelievers, to keep them from seeing the light of the gospel of the glory of Christ, who is the image of God” (2 Cor 4:4). That would seem to indicate that Satan’s winning, but wait! The Bible also tells us that we “were dead in the trespasses and sins” (Eph 2:1), and all of us were, at one time, “following the course of this world, following the prince of the power of the air, the spirit that is now at work in the sons of disobedience” (Eph 2:2). And if not for the grace of God, we’d still be dead. Dead in our sins…dead men and dead women walking, but God intervened because “God, being rich in mercy, because of the great love with which he loved us, even when we were dead in our trespasses, made us alive together with Christ—by grace you have been saved” (Eph 2:4-5). The point behind this is there is an invisible enemy that works visibly, either through powers or people, but he can only go so far.

Why does the world seem so vulnerable to satanic influence? For one thing, they do not even believe in Satan. Someone who they don’t believe exists, is no threat to them, but we know that “we do not wrestle against flesh and blood, but against the rulers, against the authorities, against the cosmic powers over this present darkness, against the spiritual forces of evil in the heavenly places” (Eph 6:12). It’s easier to fight something that’s visible; something that’s right before us, but an invisible enemy is more dangerous because you don’t always see them, however, there’s one who lurks around us today, and he is alive and active. He is so deceptive that he can imitate the gospel and the preachers while deceiving millions. For example, many wealth and prosperity gospels have infiltrated the church today and the shift, like consumerism, is to “what can the church do for me.” We’ve watered down the gospel by eliminating words like sin, the cross, the blood of the Lamb of God, sanctification, holiness, and repentance. He’s deceptive and crafty, and his messages do make you feel really good, but remember, his main purpose is to strike you and other believers down, and to veil the true gospel of repentance and faith (Mark 1:14-15). That teaching doesn’t require anyone to change, so it’s not really the gospel at all.

Martin Luther once said that Satan is on a leash, or that the Devil is God’s Devil. Satan can only do as much as God allows, but even in Satan’s evil, God brings about much good. We can look at the cross to see that (John3:16-17). It is not accurate to say “the Devil made me do it,” but rather, the Devil influenced me to do it, but we are still responsible for our actions. The Apostle Peter was told by Jesus, “Get behind me, Satan” because Peter was trying to have Jesus avoid the cross, which was our only hope. That’s the same thing Satan wanted because he knew it sealed his fate (John 19:28-30). When Satan had been roaming the earth, presumably to make people’s lives miserable, the “Lord said to Satan, “Have you considered my servant Job, that there is none like him on the earth, a blameless and upright man, who fears God and turns away from evil” (Job 1:8), but Satan wanted to prove to God that Job was just “being good” so that God would bless him. Then, “Satan answered the Lord and said, “Does Job fear God for no reason? Have you not put a hedge around him and his house and all that he has, on every side? You have blessed the work of his hands, and his possessions have increased in the land” (Job 1:9-10), so Satan asked the Lord to “stretch out your hand and touch all that he has, and he will curse you to your face” (Job 1:11). That’s when the Lord told Satan, “Behold, all that he has is in your hand. Only against him do not stretch out your hand.” So Satan went out from the presence of the Lord” (Job 1:11-12). Satan did nearly destroy Job and his faith, but Satan could not take Job’s life. That right is only given to the One Who gives life, and that is God. 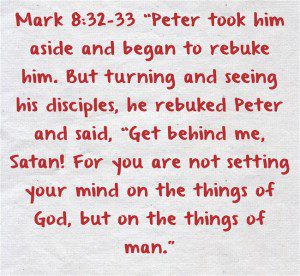 Lucifer may well have been God’s greatest creation. He was splendid beyond description, but verses like Isaiah 14:11-15, Ezekiel 28:12-19 and Revelation 12:4 indicate that Satan was tossed out of heaven, and about 1/3rd of the angels followed him. These became demons. Instead of being a light bearer in heaven, he became full of darkness due to his pride. He became so lifted up, that his logic left him, and he thought he could even take over the thorn of God, even becoming God (Isaiah 14:14)! By the way, there are a few cults that teach that we can become gods, and that has a satanic source too, but that’s what pride does. It blinds you to the truth. Satan sealed his own fate by rebelling against God, and will face a final torment that is simply indescribable. It says that “the devil who had deceived them was thrown into the lake of fire and sulfur where the beast and the false prophet were, and they will be tormented day and night forever and ever” (Rev 20:11). If satanic influence begins to affect you, then remind Satan of his future.

The Devil can only do so much. God allows him to roam the earth, like a roaring lion, seeking whom he may devour, so we must remain diligent (1 Pet 5:8), but more likely, it is demonic influence that we face. That’s because Satan is not omnipresent. He has to roam about on the earth, but Satan is the god of this world and will try to influence the leaders of this world, and he’s done a very good job, don’t you think, but even this will play right into the sovereign hands of God. That’s because even the Devil is God’s Devil.