How The Trinity Works In Our Salvation

We are saved by the redeeming work of Jesus Christ, but the other members of the Trinity are also at work in our salvation.

How does the Father work with the Son and the Holy Spirit in our salvation? Jesus mentions the Father’s role when He says, “No one can come to me unless the Father who sent me draws him. And I will raise him up on the last day” (John 6:44). To make it even clearer, He says “that no one can come to me unless it is granted him by the Father” (John 6:65), so it is not we who found God (Who was not missing!), but God found us; He called us. Salvation is not a decision we make. It is an act of God upon those whom He brings to repentance and faith (Acts 5:11, 11:18; 2 Tim 2:24-26). Jesus assures believers that “All that the Father gives me will come to me, and whoever comes to me I will never cast out” (John 6:37). It is the Father’s promise to deliver you into the kingdom as Jesus again says, “this is the will of him who sent me, that I should lose nothing of all that he has given me, but raise it up on the last day” (John 6:39). Twice in three sentences, Jesus says that “All” will come to Him and of all given to Him (Jesus), so not one will be lost, as a result of the Father drawing us to Christ. Think of it this way; God thought us; God sought us; God caught us; God bought us; and God taught us. It’s all about God and not about us (Psalm 115:1).

During Jesus’ earthly ministry, the disciples were always concerned with where they’d be ruling in the coming Kingdom, but Jesus told them that they had it all wrong. Here is the Living God, Jesus Christ; the omnipotent God, telling them that “even the Son of Man came not to be served but to serve, and to give his life as a ransom for many” (Mark 10:45). They thought like most of the world thinks; the greatest person is the one with the most servants, but Jesus flips that on its head, saying that “whoever would be first among you must be slave of all” (Mark 10:44). The Apostle Peter could not be clearer about how Jesus Christ brings salvation to the sinner. Peter says “that you were ransomed from the futile ways inherited from your forefathers, not with perishable things such as silver or gold” (1 Pet 1:18). All the wealth in the universe would not be sufficient to redeem even on sinner. It took “the precious blood of Christ, like that of a lamb without blemish or spot” (1 Pet 1:19) to redeem us. There was absolutely no other way (Acts 4:12). 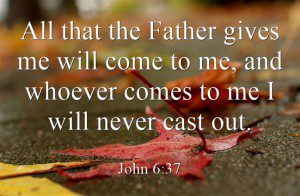 The Holy Spirit has a special role as He seals us for eternity, just as a letter from a king had a wax seal on it, and anyone who was unauthorized to open it would meet a certain death. Only those who had the authority could open it, and in this case, it was the Lamb of God. The Apostle Paul says that God has “predestined us for adoption to himself as sons through Jesus Christ, according to the purpose of his will” (Eph 1:5), and “when you heard the word of truth, the gospel of your salvation, and believed in him [you] were sealed with the promised Holy Spirit” (Eph 1:13). The Holy Spirit was how God quickened us to new life and birthed us from above (John 3:3-7). Every believer should think back and remember that “you were dead in the trespasses and sins in which you once walked, following the course of this world, following the prince of the power of the air, the spirit that is now at work in the sons of disobedience—“ (Eph 2:1-2). In fact, “we all once lived in the passions of our flesh, carrying out the desires of the body and the mind, and were by nature children of wrath, like the rest of mankind” (Eph 2:3), and without hope. So what changed? It was the fact that “God, being rich in mercy, because of the great love with which he loved us, even when we were dead in our trespasses, made us alive together with Christ—by grace you have been saved” (Eph 2:4-5). 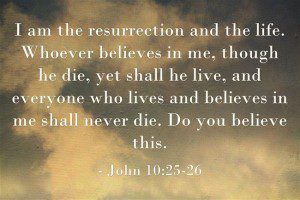 Lazarus could not have resurrected himself any more than we could have quickened ourselves to new life in Christ. The work of the Spirit is also found in the Word of God, since “All Scripture is breathed out by God and profitable for teaching, for reproof, for correction, and for training in righteousness” (2 Tim 3:16), and no prophecy, and I would say, no Scripture would have been written except for the Spirit of God. Scripture was never “produced by the will of man, but men spoke from God as they were carried along by the Holy Spirit” (2 Pet 1:21), and the Word of God is living and active, and discerns the innermost “thoughts and intents of the heart” (Heb 4:12), revealing to us what sin is (Rom 7:7; 1 John 3:4). The Spirit of God brings home the fact that we are sinners and we need saving. Jesus, speaking of the coming Holy Spirit, said that when He comes, “he will convict the world concerning sin and righteousness and judgment” (John 16:8), and that is just what He’s done to untold numbers throughout the ages.

The Trinity are always in perfect agreement with one another. All Three are working together in our salvation, so all Three Persons of the Trinity are actively involved in our redemption. The Father calls us or draws us to Christ, and as Jesus said, all that He draws, will all be delivered to the Son. The Son saves us; giving His perfect, sinless life of obedience as a ransom for us. The Holy Spirit convicts us of our sins, making us aware of our need for Christ through His inner work, and through the outer Word, the Word of God. It is the Word of God, shared by a person of God, with the Spirit of God, to birth a child of God, through the Son of God and for the glory of God.

May 31, 2019
6 Things That Damage Our Relationship With God
Next Post

June 5, 2019 How Joy Is A Source of Strength
Recent Comments
11 Comments | Leave a Comment
Browse Our Archives
Related posts from Christian Crier