God and “Person of Interest’s” Harold Finch Seem to Agree on Free Will June 16, 2016 Tony Rossi 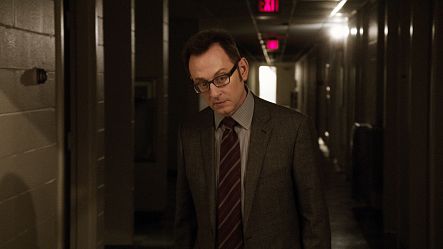 “Why do bad things happen to good people?” is a question that philosophers, theologians, and ordinary people have grappled with for ages. For believers, this can be an especially challenging issue since we insist that a good and loving God created the universe.

Part of the answer, at least, is that God gave human beings free will because He doesn’t want to force us to do anything. That freedom is a loving gift. What we choose to do with that gift is up to us. This may be little comfort to the victims of evil acts, but it is the cost of freedom.

That idea can lead to another question: if there were a system created by man that would take away our free will, but lead to a seemingly better, more peaceful world, should we give in to it?

While this is ordinarily an issue to be dealt with by ethicists or in college text books, it’s actually been addressed on prime time television for some time now on the series “Person of Interest.”

The show stars Jim Caviezel as former soldier John Reese – and Michael Emerson as computer programmer Harold Finch, the character behind the show’s opening voiceover which explains the premise: “You are being watched. The government has a secret system, a machine that spies on you every hour of every day. I know because I built it. I designed the machine to detect acts of terror but it sees everything. Violent crimes involving ordinary people, people like you. Crimes the government considered irrelevant. They wouldn’t act, so I decided I would. But I needed a partner, someone with the skills to intervene. Hunted by the authorities, we work in secret. You’ll never find us, but victim or perpetrator, if your number’s up… we’ll find you.”

While season one reflected more of a straightforward procedural element with deeper, darker issues sprinkled throughout, the most recent story arc – culminating in the show’s fifth and unfortunately final season – addressed the full ramifications of a surveillance state which gives other people and a machine overlord power over every aspect of humanity.

Finch created his Machine to help others, “to protect and save humanity,” as he says. But since then, a competing system called Samaritan, an Artificial Superintelligence, has taken over, and it was not programmed to adhere to any particular morality.

Its name, of course, hearkens back to Jesus’s story of “the Good Samaritan” who went out of his way to help others. No doubt, this is the connotation Samaritan’s creators were going for to sell their machine to the government, but it is really about power, not goodness. Samaritan wants to exterminate anyone who thinks for themselves and veers off the course it has set. And it keeps its existence secret from the public, who might not take kindly to the reality that they are being ruled by a tyrant of sorts.

In the world ruled by Samaritan, murders and crimes have gone down. But rules of law like due process have also suffered and the unpredictable nature of humanity – for good or ill – has also been stifled. 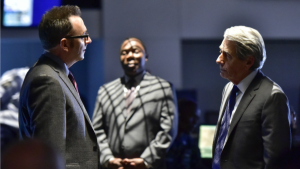 The arguments for and against Samaritan came to a head in season’s five’s penultimate episode, titled “.exe” (written by Erik Mountain and executive producer Greg Plageman). Finch faces off with Samaritan’s primary acolyte, Greer (John Nolan) and his henchman Travers (Michael Potts):

Greer: How can you deny the good that Samaritan has done? Global food distribution, pre-emptive health screenings.

Finch: So there are people you help. What about the people you’ve killed?

Travers: A small minority, Mister Finch. And all to affect a greater good. We sorted them, reallocated resources, removed inefficiencies, obstacles.

Greer: It’s not truth. It’s ignorance. We’re dragging humanity to a higher plane. An ASI is the only thing that can save this planet. Or get us too another one if need be.

Finch: Humanity has always managed to survive on its own.

Greer: With a little help from the gods. A flood is coming. The great Filter, and Samaritan is building an ark for us to board two by two.

Finch: Oh? Which species gets left behind?

Greer: Those that cannot adapt.

Finch’s plan is to unleash a computer virus that would destroy both Samaritan and the Machine he built. Greer tries to talk him out of it:

Greer: This virus you uploaded is nothing but a tragic mistake. Tell me, after it’s eradicated both ASIs, what then?

Finch: Then we go back to letting humanity determine its own fate.

Greer: Surely, you’re not that naive. You know another ASI will soon arise.

Finch: I’m for certain I don’t and neither do you.

Greer: Proliferation is inevitable. So is progress?

While “Person of Interest” often refers to the ASIs as “gods,” the show isn’t overtly religious in any other sense. However, Finch’s beliefs on free will do mirror what’s taught in the Catechism of the Catholic Church:

God created man a rational being, conferring on him the dignity of a person who can initiate and control his own actions. “God willed that man should be ‘left in the hand of his own counsel,’ so that he might of his own accord seek his Creator and freely attain his full and blessed perfection by cleaving to him.”…Freedom is the power, rooted in reason and will, to act or not to act, to do this or that, and so to perform deliberate actions on one’s own responsibility. By free will one shapes one’s own life. Human freedom is a force for growth and maturity in truth and goodness; it attains its perfection when directed toward God, our beatitude.

Finch’s views on God may not be evident, but he would no doubt agree with the above statement, “Human freedom is a force for growth and maturity in truth and goodness.”

In other words, the opportunity to make choices that involve sacrifice or courage enable us to grow morally and spiritually as human beings. Far from humanity being irrelevant, as Greer and others believe, our moral and spiritual growth is at the heart of the purpose of life itself. That growth requires free will, the loss of which might cost us more than we realize.

“Person of Interest” gives voice to that idea, leaving viewers with plenty to think about as we grapple with similar issues in the modern world.

– Saving the Part of Yourself That Matters Most 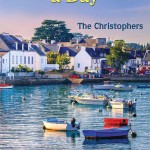 June 1, 2016
Keep Your Strengths from Turning Into Weaknesses
Next Post 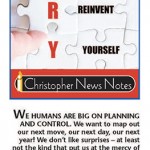 I Have Decided to Believe In...
Steel Magnificat
Related posts from Christopher Closeup