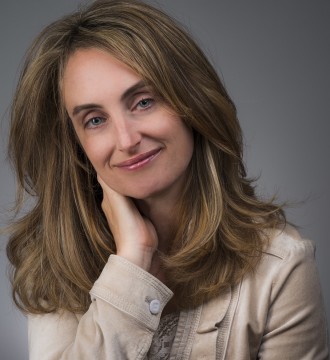 When six-time Emmy Award-winning ESPN producer Lisa Fenn sensed the voice of God giving her that message while covering a story, she didn’t know exactly what it meant. But as someone who gave her life to Christ as a junior in high school, she felt compelled to pursue the matter. That’s the story she documents in her memoir, “Carry On: A Story of Resilience, Redemption, and an Unlikely Family.”

Interestingly, the story she was covering started with someone else listening to the voice of God, too.

It was 2006 in Cleveland, Ohio, when Lincoln-West High School’s assistant wrestling coach, Torry Robinson, claims to have heard God telling him, “Your champion is upstairs.” Since Coach Robinson was a man of deep faith – and because the team was pretty terrible – he went upstairs. Standing at the door of the weight room was a student he didn’t know, an African American young man named Dartanyon Crockett. Robinson recruited him for the team right then and there.

With a strong, athletic physique and a natural aptitude for wrestling, Dartanyon displayed great potential – potential that evolved into progress as he and the team started earning small victories. That’s why it came as a shock when everyone discovered that Dartanyon was legally blind. He had congenital conditions called nystagmus and optic neuropathy, which allow him to only see several feet in front of him.

A wrestling team with a blind student was unique in and of itself. But then, Leroy Sutton also entered the picture.

At age 11, Leroy lost both his legs when he was hit by a freight train on his way to school. After his recovery, he took up wrestling because it’s a sport in which amputees can find a level of success. When he transferred to Lincoln-West, someone invited him to join the team. For both Dartanyon and Leroy, it was a way to have other people look at them as competitors or equals instead of young men to be pitied. 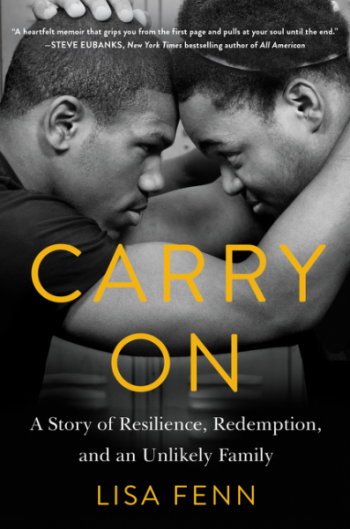 The bond that developed between them increased as they practiced together. Then came a pivotal moment.

Fenn said, “The day of their first match, it was time to get on the team bus…and there wasn’t a ramp there. There was not a wheelchair-accessible way to get onto the bus. They hadn’t thought of that. So Dartanyon casually said, ‘Just get on my back and I’ll carry you.’ And Leroy did. He put him on the bus, packed up his wheelchair, and then carried him off the bus when they got to their match. He carried him up the bleachers, carried him down the bleachers. There was never really any discussion about it. It just became the thing that they did, and that was how their bond began to grow.”

The story of Dartanyon and Leroy’s friendship spread, and eventually found its way to Fenn, via a call from her father in Cleveland and a story in the Plain Dealer. She specialized in feature stories grounded in emotional and spiritual depth, stories that were rooted in the lessons of her Christian faith.

Earlier in her life, Fenn had spent time caring for orphans in Russia and distributing Bibles to aborigines in Australia. These experiences, she recalled, “introduced me to the adventure of faith, traveling with God, having His presence near, and being exposed to the great needs of this world and the universal needs of this world. It was a period of my life that grew in me a desire to have a ministry of my own. I certainly never expected it to be cable television!”

Fenn started approaching her job as a ministry. Every day before leaving her house, she would say, “Lord, use me where You can.” And she believes He often does: “In my line of work, I put cameras on people, and it sort of creates this instant vulnerability where they share some of the deepest parts of their emotions and their experiences. In that way, it did become a ministry, because it allowed me to get to know people very quickly, on a deep level. And when I saw needs, I was in a position to meet them when the cameras went off. They’re looking for a response and they’re looking for empathy from me, from the person sitting across from them. I saw that as a great privilege. I loved being in that position, because I felt like that’s the position that Jesus Himself would want to be in. So I grew close to a lot of my story subjects. Never this close, but I don’t know that I had ever encountered needs as deep as these.”

Those needs went beyond physical challenges for Dartanyon and Leroy.
Dartanyon’s mother died when he was eight, his father struggled with addiction issues, and he stayed with friends and family because he didn’t have a place to call home. Leroy’s drug-addicted mother couldn’t handle his disability, so she often abandoned him and his younger sister for long stretches of time.

So how did Fenn’s first meeting with the two young men go? “When I first met them, it was at a wrestling match. Dartanyon was happy to talk to me, He told me about his mother passing away, and how he really missed her, and how after every match he would point at the sky and dedicate his win to her. So, I did feel close to him, as he was sharing those stories….In the book I talk about how after his last match, he pointed at the sky, and I sensed this voice of God in my heart saying, ‘Take care of my son.’ It was powerful. I didn’t know the extent of where this was going, but it was a prompt from the Lord that connected me to him at that point. Leroy was tougher. He wanted nothing to do with me. I later learned that he had had some pretty confusing experiences with the media after his accident…but I didn’t know that at the time; I just thought he hated me!”

Fenn shot Dartanyon and Leroy’s story over five months, and they all grew closer. She was “heartbroken by the depth of need in their life,” especially since they both had big dreams: Dartanyon of going to law school, and Leroy of being a video game designer. And they both wanted to go to college, but had no idea of how to accomplish that in light of their poverty and academic deficiencies. “They didn’t know how to plan; they had no resources behind them,” Fenn said.

Every time she would leave them, she would pray, “Lord, do something here. We’ve got to fix this. These are good kids. They deserve better.”

ESPN viewers agreed, and donated enough money to get the teens to college. But that didn’t result in the happy ending everyone had hoped for. Fenn now realizes that Dartanyon and Leroy didn’t have the life skills to handle it, so she took it upon herself to navigate them through everything. 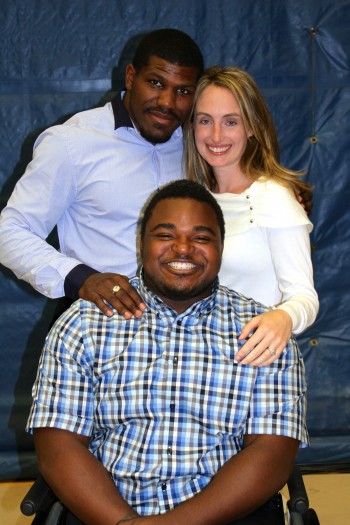 Over time, Fenn and her husband wound up “absorbing [the teens] into our family,” which they see as a spiritual adoption of sorts. It was an “adventure of faith” that changed all their lives.

“As a child, I had always had a desire to adopt. My husband is an Iranian Christian and adoption is not really a thing in Iran. But after meeting Leroy and Dartanyon and hearing me talk about them, he came alongside that dream and fell in love with them, too. We also ended up adopting an infant from Cleveland…to try to provide for a child before they had to struggle, like Leroy and Dartanyon. So we also have a young son who’s African American. Leroy and Dartanyon are his big brothers. And it’s beautiful how God’s knit our family together. And then my father, who grew up in with some racist mindsets, Leroy, Dartanyon and our youngest son have transformed everyone’s thinking and ideas about what family is. Where we maybe once thought family was having two kids and a dog, we now see that family is what just keeps growing when you open yourself up to what the Lord has for you.”

(To listen to my full interview with Lisa Fenn, click on the podcast link): 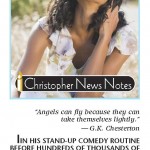 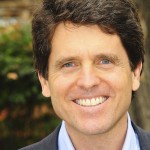 November 28, 2016 The Beauty of Blessings & the Pain of the World: Mark Shriver Explores the Life of Pope Francis
Recent Comments
0 | Leave a Comment
Browse Our Archives
Related posts from Christopher Closeup