Dare We Hope That All Dogs Go To Heaven?

Dare We Hope That All Dogs Go To Heaven? December 18, 2014 Artur Rosman

Dare we hope that all dogs go to heaven? Sure, why not? Though there’s no reason to believe cats will go as well.

The canine chances seem better than the chances for us humans. They are the animal kingdom’s model of fidelity. I mean, do you see any dogs (besides your neighbors) getting divorced?

Pope Paul VI once made a pronouncement upon this dogged question, “One day we will see our animals in the eternity of Christ.” These words proved to be so popular they were put in Francis’ mouth last week and manufactured another tiresome media-driven controversy.

His words seem so offensive to us, because Christianity has lost its cosmic dimension. Czeslaw Milosz dates this loss to at least the Reformation in one of his letters to Thomas Merton collected in Striving Toward Being:

I do not know to what extent a sort of despair at the sight of ruthless necessity in Nature is justified. Yet it exists while it was not known until quite modern times. The distance between man and the rest of Creation was so great that for Descartes too the animal was a machine. Some old Manichean elements started to revive perhaps in the Reformation but they were mitigated.

My Advent reading, Stratford Caldecott’s All Things Made New (more excerpts from the book available here), places the divorce between humans and the rest of nature even further back. Commenting on a passage from the Summa of Thomas on creation he says:

Aquinas seems almost to have forgotten the presence of the Tree of Life with its fruits in John’s final vision [in the Book of Revelation]. The Summa portrays a world of light, and luminous rocks, and frozen, blazing stars, with human bodies somehow in the midst of things, resting in God. Perhaps the lesson is that logic alone cannot give us a glimpse of the Resurrection, when even poetry must fail.

Caldecott goes on to note that “the world to come, the world re-made, is not made from nothing. It is the old world healed, transfigured, and perfected.” He then quotes a visionary von Balthasar passage [“…When Christ who is our life appears, then you will also reappear in glory…”] on this point of eschatology and adds:

–as also will the other living creatures, for if our animal nature is to be resurrected it seems that the rest of creation cannot be excluded. Though, as Saint Thomas argues, individual animals do not possess immortal personhood, each of them expresses a part of the quality of their species, and those species cannot be absent from a world where ‘the wolf shall dwell with the lamb, and the leopard shall lie down with the kid, and the calf and the lion and the fatling together, and a little child shall lead them‘ (Isaiah 11:6).

Ergo, we might need doggie bags in Heaven as well. As a dog-person I think it’s still safe to ignore the catnip in the hereafter. Or, dare we be so bold and hope that all cats be saved as well?

Jesus told us to love our enemies.

Onward and upward to Heaven… 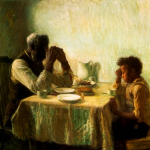 December 17, 2014
In the Beginning Was Poverty: Advent Should Rob You Blind
Next Post

December 19, 2014 Beauty For Truth's Sake: The Creed's Amazing Hidden Symmetry Between Son & Spirit
Recent Comments
0 | Leave a Comment
Browse Our Archives
get the latest updates from
Cosmos The In Lost
and the Patheos
Catholic
Channel
POPULAR AT PATHEOS Catholic
1