I was elected the education director of the University of Washington Newman Center in the early or mid aughts. This took place not long after I reverted to Catholicism thanks to the European history, comparative religion, and art history classes I took at a secular state university.

The Birkenstocked priest in charge of Newman had never formally introduced himself to me until that point. After my appointment was officially announced at a meeting of some sort he finally came up to me. The strong smell coming from his mouth hit me first. Before I could recover he dumped the following question on me: “Are you Opus Dei?”

This litmus test was our introduction, the beginning of our odd pairing. The message was clear: as a vaguely Neo-Conservative Catholic (I’m glad it passed, but no thanks to him) I was not welcome.

The priest spent the rest of the school year passively-aggressively scheduling all of my speakers before holidays, midterms, and finals. He wanted me to feel like a failure. And I did.

Archbishop Romero was predictably one of the heroes of this priest and he assumed that Opus Dei must be his polar opposite.

Imagine my perverse Rabelaisian pleasure upon discovering the following:

“I met Archbishop Romero,” the Prelate of Opus Dei said, “during one of his visits to Saint Josemaria, in 1970. He was a pious person, detached from his own interests and dedicated to his people. His struggle for sanctity was palpable. Archbishop Romero was one of the first bishops who, following the death of Saint Josemaria in 1975, wrote to Paul VI asking that his cause of canonization be opened. I am certain that now, from Heaven, he continues interceding with his good friend Saint Josemaria for this portion of the People of God that is Opus Dei.”

Most Blessed Father, I regard the still-recent day of the death of Monsignor Josemaria Escriva de Balaguer as contributing to the greater glory of God and to the well-being of souls, and I am requesting of Your Holiness the quick opening of the cause for beatification and canonization of such an eminent priest.

The recently deceased David Carr and Catholicism is yet another odd pairing. I’ve only seen Carr here and there and didn’t know much about his biography. It was fascinating, given his endearing history of addiction and dissolution, to read the following comments about his messy relationship with faith in the Washington Post:

You see? Twerking is part of the history of civilization (much baser than we usually suppose) rather than a sign the end is nigh.

Finally, the works of Leon Bloy, admired by Pope Francis and Raissa Maritain, have either been untranslated or out of print. This will be remedied soon enough with the publishing of his Disagreeable Tales, which are billed as:

Thirty tales of theft, onanism, incest, murder and a host of other forms of perversion and cruelty from the “ungrateful beggar” and “pilgrim of the absolute,” Léon Bloy. Disagreeable Tales, first published in French in 1894, collects Bloy’s narrative sermons from the depths: a cauldron of frightful anecdotes and inspired misanthropy that represents a high point of the French Decadent movement and the most emblematic entry into the library of the “Cruel Tale” christened by Villiers de l’Isle-Adam . . .

. . . Léon Bloy (1846-1917) is among the best known but least translated of the French Decadent writers. Nourishing antireligious sentiments in his youth, his outlook changed radically when he moved to Paris and came under the influence of Barbey d’Aurevilly, the unconventionally religious novelist best known for Les Diaboliques. He earned the dual nicknames of “The Pilgrim of the Absolute” through his unorthodox devotion to the Catholic Church, and “The Ungrateful Beggar” through his endless reliance on the charity of friends to support him and his family.

Here’s a sampler of Bloy’s ungratefulness toward liberalism:

Bourgeois are by nature people who hate and destroy heavens. When they see a beautiful site, they have no more pressing dream than to cut the trees, dry up the springs, build streets, shops and urinals. They call this ceasing a business opportunity.

The odd pairing here is a bit onanistic. It comes from the news that another Bloy book is coming soon. It is a reissue of The Woman Who Was Poor by St. Augustine’s Press, which you can sample here through Dappled Things (something about “reeking of God“).

Love is strange, a struggle, and, I believe, an opus Dei.

If you’re looking to explore love in contemporary philosophy then look no further than some of the books on this list and Eagleton’s blistering attack upon the ideology of scientism. 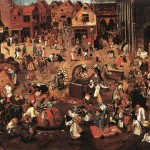 February 13, 2015
Carnival is Getting off the Ground: Stoop Down & Meet St. Puke!
Next Post 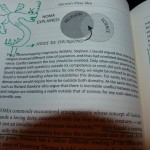 February 16, 2015 Forget the Classics: What New Theology Books Ought You Read This Lent?
Recent Comments
0 | Leave a Comment
"So you in fact did not vote for the lesser of two evils but instead ..."
gethoht Hunter S. Thompson’s Fear and Loathing ..."
"Wait a minute, what am I missing? The host must contain some gluten, lest it ..."
RPlavo . The Surprising Anti-Capitalist Logic Behind the ..."
"Gluten intolerance is completely -- and I mean completely -- different from celiac disease. Many ..."
Bobby Lawndale The Surprising Anti-Capitalist Logic Behind the ..."
"Read Bruno's comment: #2 below your ranting comment."
Adrienne Szatkowski Michael Voris’s Stunning and Admirable Broken-Hearted ..."
Browse Our Archives
Related posts from Cosmos The In Lost