Pope Francis said St. John Paul II showed sick people how to “carry the cross of suffering with joy” on the eve of the 10th anniversary of the Polish-born pope’s death.

He made a connection with the events we commemorate during Holy Week:

“We remember him as a great Witness of the suffering Christ, dead and risen,” Francis said.

Now, the only thing better than exposing famous atheists as believers as I did with Sartre and Camus is enlisting the help of atheists in unpopular ecclesial causes.

I sense the tide has turned, especially for Neo-Cons, on John Paul II.  Their attempts to baptize capitalism and every recent American war by enlisting JP2 in their corner have fallen apart.  A surprising number of them now busy themselves taking the same sorts petty pot shots at Wojtyla they once hated from liberal Catholics (I won’t stoop to linking their attacks).

I would argue being in the crosshairs of both sides of the theological spectrum is a good place to be.  But don’t let me make the argument.  I’ll let Julia Kristeva, an atheist, feminist, and psychoanalyst make the case for me. (She also appeared at the 2011 World Day of Prayer for Peace in Assisi.  You can read her call for peace between humanists and religionists here.)

Why is John Paul II significant according to her? In This Incredible Need to Believe she explains in a passage addressed to fellow non-believers:

‘Don’t be afraid of Christianity, and together we won’t fear religions!’ I find myself wanting to say to my agnostic, humanist, atheist friends. We hail from the same continent of thought, we often rise up ‘against’ each other because we are in reality ‘right against’ one another; let us continue our analyses . . . And I have a dream: may true complicities, essential in our face to face with the rise of barbarity, be woven not only, and to my way of thinking less, between Christianity and the other religions today tempted by fundamentalism, but between Christianity and this vision to which I adhere that grows out of Christianity, although it is detached from from it today, and has the ambition to elucidate the perilous paths of freedom. In his person and his acts John Paul II made this possible. Far more than sainthood, this pope has shown us his universal dimension.

She made this statement in reaction to the pope’s death in 2005 and after re-reading his phenomenological treatise The Acting Person.  However, Kristeva forgets how the “continent of thought” she’s talking about was created by the Christian revolution and cannot be detached from it so easily.

Let’s not get bogged down in the details. It is clear that without the fundamental Christian revolution we wouldn’t notice whole classes of people.  The Greeks, Romans, the Enlightenment, and Nietzsche didn’t make much of the weak and dependent, other than sporadically excluding (or exterminating) them.

And so it’s important to note Kristeva also thinks the greatness of John Paul II consists in his witness of weakness:

[I’m never sure whether the original French or the translation is jumbled when it comes to Kristeva.  But I’m sure you’ll get the point, ed.] On that day, and up to his death, we saw a handicapped man expose himself.  All those handicapped citizens, their families, and those with whom I work to have the rights of these excluded people, not like the others, recognized, know the difficulty, or even the impossibility of ensuring that the dignity of the most vulnerable, those who make us face up to deficiency and psychic or physical death, was respected.  Whereas society, dogged by the cult of performance, of excellence and enjoyment, makes manifest the shortcomings of this culture of mutual assistance and, beyond, of the identification with the suffering of Christ on the Cross or the ease in Christian sadomasochism that John Paul II successfully maintained even on his deathbed, the body of the handicapped pope was and remains and invitation to know life up to its limits.  And to develop this solidarity with people who are dependent–the handicapped or the aged–which modern humanism has so much difficulty doing.

You can read more of her thoughts on Catholicism, especially John Paul II, in her collection of essays, This Incredible Need to Believe. There is also another additional excerpt on the topic of Catholicism, the Baroque, and suffering from her book here.

And how sad is it that non-Catholics can see the contribution of Catholicism to society better than some Catholics?

See also: Alasdair MacIntyre’s revolutionary argument about weakness and disability. Since John Paul II was a philosopher by training you might want to take a look at a list of my all time favorite philosophy books. 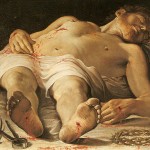 April 3, 2015 Holy Saturday: Death as an Object of Faith
Recent Comments
3 Comments | Leave a Comment
"Wait a minute, what am I missing? The host must contain some gluten, lest it ..."
RPlavo . The Surprising Anti-Capitalist Logic Behind the ..."
"Gluten intolerance is completely -- and I mean completely -- different from celiac disease. Many ..."
Bobby Lawndale The Surprising Anti-Capitalist Logic Behind the ..."
"Read Bruno's comment: #2 below your ranting comment."
Adrienne Szatkowski Michael Voris’s Stunning and Admirable Broken-Hearted ..."
"Science needs "a confession of sins and an articulate profession of faith"? Seriously?Certainly, individual scientists ..."
Elzbieta 2 Reasons Why the March for ..."
Browse Our Archives
get the latest updates from
Cosmos The In Lost
and the Patheos
Catholic
Channel
POPULAR AT PATHEOS Catholic
1