From Russia with Idols

I attempted to make something out of my nothing with my last post. It was a kind of creatio ex nihilo.

I could probably continue along the same vein for a couple more weeks at the risk of boring all of my readers to death, pushing them off the cliff, or encouraging their binge drinking.

Instead, it seems more appropriate to talk instead about another instance of creating something out of nothing: The obsession of some Catholics with reunion with “The East.”

The slogan of getting Christianity breathing with both its lungs, East and West together, has been around since at least the times of JP2. The problem with the slogan–beyond the obvious problems and schisms tarring the Western lung– is that there are much less obvious and longer lasting problems and schisms plaguing the Eastern lung. (If you recall, there are some studies suggest incense to be potentially as toxic as smoking cigarettes).

For the Unity of All: Contributions to the Theological Dialogue between East and West by John Panteleimon Manoussakis sums up this toxic relationship within Eastern Orthodoxy itself with something like a tautology. To paraphrase: The East is not on board with Petrine Primacy because it itself needs Papal Primacy.

That’s going to need a little bit of unpacking. The East is not some kind of monolith, but rather a whole series of mostly national churches that are in mostly nominal unity. Dialogue between Churches of the East is frequently stymied by national interests. According to Manoussakis, The Ecumenical Patriarchate of Constantinople is the only bishopric that escapes these narrow interests because it is largely divorced from the secular-Muslim government of Turkey and therefore has, more than other patriarchates, focused upon matters more catholic (as in universal) than the narrow interests of a national church. For example, long before Pope Francis, Patriarch Bartholomew championed environmental protection from his pulpit.

Patriarch Bartholomew’s recent rebuke of the Moscow Patriarchate also proves the accuracy of the account given by Manoussakis about the need for unity within Orthodoxy itself:

Orthodox Patriarch Bartholomew I of Constantinople underlined the importance of ecumenical ties with Rome, and criticized the resistance of the Russian Orthodox Church, in an August 29 address. The Ecumenical Patriarch—recognized as the “first among equals” of the world’s Orthodox leaders—stressed the primary importance of ecumenical affairs, and reiterated that his role involves “protecting the unity of the whole Orthodox Church.” He said that opposition to ecumenical unity reflects a “diabolical” impulse. Patriarch Bartholomew said that his continuing contacts with the Holy See are a critical component of his ecumenical work. He expressed his enthusiasm for the planned worldwide Orthodox council, but conceded that it cannot accurately be described as an ecumenical council “because Western Christians are not invited to participate as members.” The Ecumenical Patriarch—who has frequently sparred in recent years with the leaders of the Patriarchate of Moscow—clearly appeared to be criticizing the Russian Orthodox leadership when he spoke critically about Orthodox bodies that “maintain intimate connections with the government of their land and enjoy abundant financial support,” and advance the political interests of their nations.

To be fair, Moscow has struggled to divorce itself from Putin’s influence and the idolatry of nationalism after his recent land grabs have caused disunity withing their own Patriarchate.

The issue of idolatry tangentially brings me to another piece of religious news from Russia. A recent archaeological discovery, or actually a new dating of an old find, has caused researchers to rethink the history of civilization:

The Idol is around the same age as anthropomorphic stone stelae found at the ancient site of Gobekli Tepe in modern-day Turkey.

‘This confirms that hunters and fishermen from Urals created works of art as developed and as monumental as ancient farmers of the Middle East,’ said the museum.

The Idol – more than 6,000 years older than the UK’s Stonehenge – was preserved ‘as if in a time capsule’ in the peat bog on the western fringes of Siberia.

Experts have surmised that its hieroglyphics contain encoded information on the ‘creation of the world’ from ancient man. It stands 2.8 metres in height but originally was 5.3 metres tall, as high as a two storey house. Almost two metres of the artifact went missing during Russian’s 20th century political turmoil, though Siberian archaeologist Vladimir Tolmachev drew images of all the pieces. 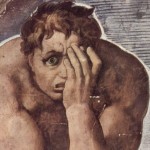 September 7, 2015
The Anxiety of the Freshly Unemployed Man on Labor Day
Next Post 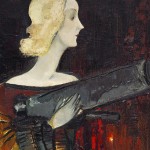 September 9, 2015 Florida Man Wants You to Buy a Christian Assault Rifle
Recent Comments
0 | Leave a Comment
Browse Our Archives
get the latest from
Cosmos The In Lost
Sign up for our newsletter
POPULAR AT PATHEOS Catholic
1