I could not suppress my amusement when I ran across Kenneth L. Woodward’s reactions to the papal visit in my Facebook feed. Each one is differently amusing and hilarious than the other. He seems to have posted them from his smart phone. This explains the ellipses, plus the creative grammar and spelling. I considered going through these writings and editing them for my audience. However, I decided that their original form is essential for preserving the somewhat impish nature of the whole, a kind of Rabelaisian Catholicism that I love so much.

These thoughts are reposted here with the kind permission of Mr. Woodward.

Kenneth L. Woodward is a contributing editor of Newsweek where he had been Religion editor for 38 years. In that time he reported on a variety of subjects from six continents for various departments of the magazine. Woodward is the author of some 750 articles for Newsweek , including more than 100 cover stories. He has written articles, essays and book reviews for other publications such as The New York Times, The Washington Post, The Chicago Tribune, The Wall Street Journal, Commonweal, America, First Things, Concillium, The Christian Century, The Tablet (London) and The Nation.

He is the author of three books: Grandparents Grandchildren: The Vital Connection, with Arthur Kornhaber; MD, Making Saints: How the Catholic Church Determines Who Becomes a Saint, Who Doesn’t and Why, and most recently, The Book of Miracles: The Meaning of the Miracle Stories in Christianity, Judaism, Buddhism, Hinduism and Islam. He is a winner of the National Magazine Award among other honors. He has lectured at over 50 universities; has been a Fellow of the National Humanities Center and Regents’ Lecturer in Religion at the University of California, Santa Barbara. He holds four honorary degrees, and appears frequently on television as a commentator.

1. Off to rain soaked vacation to see the leaves but here is re papal visit installment one. Francis very strategic in his speeches, esp to congress. keep in mind, popes do not write their own speeches–atho JPDuce liked to do most of his, being a professional writer. Also, bishops of countries visited have a major input and methinks here they weighed in on immigration. Watching Francesco addressing Congress kept wondering what headache relief Americans United and their ilk were inbibing. This pope has his global issues to press, namely environment (on which Orthodox Patriarch Bartholomew was ahead by two decades–remember His All Holiness Aric?–and immigration and religious freedom so not going to press abortion and such this trip round. Was astounded at his Congress audience reception. I chalk most of it up to the theory of aperception, which holds that anticipation based on prior conditioned expectations about someone conditions reaction, as in advertising. If he got just one politico dot really rethink her position–Pelosi wd be a good place to start–then it wd be worth the speech, but I think they took it in as spiritual comfort food. God knows Congress needs it.

2. More pope: Leadup to visit articles of varying quality. Chuck Kleber touted in fb New Yorker piece by some Columbia journalism prof I never heard of but assume he did honest work before landing that academic job. New Yorker must have fired fact checkers because piece said “the Catholic Church” is estimated to have holding worth 3 trillion. No word on who is doing the estimating but the sentence makes no sense. What is the Catholic Church he is talking about? Notre Dame U. has a huge endowment but it is not the Catholic Church. Nor is St. Patrick’s Cathedral in NYC which is owned by the NY archdiocese, not something called the Catholic Church, and is worth nothing on the real estate mkt since it can’t be sold, although the air rights if not already sold might be worth something. And so on. Actually, if you read between the lines, the Columbia guy was hustled by Cardinal Bertone, the former and somewhat disgraced Vatican Sec. of State, who pleads his case throughout the piece. David Remick has never fathomed the Catholic Church. Where is Xavier Rynne now that the New Yorker–yes, the New Yorker–needs him?

3. More pope: Who woulda thunk it of religiously jaded New Yorker that 80-90,000 would go to Central Park to glimpse Pappa Francesco? Demographically, NYC is Catholic territory,, tho not culturally–you only see this on the streets when a pope comes or on Ash Wednesday, when you see all those ashen foreheads. I liked the pope’s masses best. I grew up with masses on the battle front of WWII but it also works in MSG, even if you are in the last row, which is where I saw Ali-Frazier 1. My favorite mass was the one done mostly in Latin, in Philly, I think. RCs are the equal of the Anglicans when they go back to their own music–and the Latin, which is of course the language Jesus spoke when he was on his best behavior. Thank God, no Amazing Grace, which is lovely but not an inch liturgical and oh so individualistic–how I got my ass saved.

[Continue reading by clicking below] 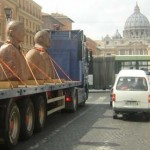 October 6, 2015
What Do the Popes Truly Say About Socialism?
Next Post 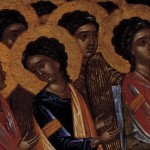 October 8, 2015 Cradle Catholic Open Letter: Stop Protestant-splaining #Synod15!
Recent Comments
0 | Leave a Comment
Browse Our Archives
get the latest from
Cosmos The In Lost
Sign up for our newsletter
POPULAR AT PATHEOS Catholic
1

Damien of Molokai, Patron Saint of...
Femina Ferox
Related posts from Cosmos The In Lost