As a teenager, I played basketball on a small cement slab behind the parish rectory where we lived. My Dad was the pastoral coordinator at St. Patrick’s Catholic Church (in Brady, Texas) at the time. I was told that the place I played at was once the entryway for a small chapel dedicated to Our Lady of Guadalupe. In that small chapel, there would be Spanish-language Masses offered for the Mexican faithful who attended Mass in Spanish.

I didn’t think too much of it until I met Fr. Sam. Fr. Sam was a Lebanese (he preferred to call himself an Arab) priest of the Society of the Precious Blood who never retired until the day he died sitting in the passenger seat during a car accident. He was well into his nineties and showed no signs of slowing down.

He taught me that the cement slab I played on was a very common thing to be found in the Diocese of San Angelo when he came to serve as pastor of Mary, Star of the Sea (a somewhat strange name for such a landlocked town) in Ballinger, Texas in 1980. He was well into his life and priesthood by that time and had just finished missionary work in Chile. Long before that, he taught high school and served as the pastor of two Black Catholic congregations in Nashville, Tennessee for six years during the late 30’s and early 40’s. He was never bitter about racial tension; but he was not naive or inexperienced either.

As a seminarian, he was proud to be the only Arab, even when it disadvantaged him. He sang tenor in the choir and was the center for his college football team, weighing-in at 165 pounds. He spoke or read English, Arabic, Hebrew, Latin, Spanish, French, and German. His Spanish oratory far exceeded the skills of many second and third generation Hispanic priests. He rarely spent any money and gave it away primarily to fund the education of bright young men to become priests— he offered me a scholarship, but I wasn’t sure whether I could follow through with the vocation.

When he arrived in Ballinger in 1980 and encountered the “Mexican church,” La Capilla de Nuestra Señora de Guadalupe, he didn’t make a fuss or write letters to the newspaper or the Bishop. He simply informed the Mexican faithful gathered for Mass that next week Mass would be celebrated at the parish sanctuary with the entire Catholic community. And he did the same for the English-speaking faithful too. I am not sure how the logistics went for the transition, but he did tell me, somewhat gleefully, that he got into a good bit of trouble with the Bishop for not informing him before making these major changes.

Apparently there was a good deal of outrage on the part of the predominantly German-American Catholics (and other European descendants too, I imagine) for including Spanish Masses and their Mexican faithful into the life of the main, “White church.” But that was not all. There was also a good deal of Mexican discomfort with the eradication of their “Mexican church.” The protests were not equal to one another; clearly the most outrage was from the “White church”—especially those who were influential in the local community.

Nonetheless, in 1980 Fr. Sam Homsey began a movement that has now become the norm: the racial integration of West Texas Catholic parishes.

Racial tension has not gone away altogether. Most West Texas parishes have an early-morning or Saturday-evening Spanish Mass and later-morning English one. There are also plenty of bilingual services, especially at Christmas and Easter. In many of those liturgies you can smell scents of days-not-gone-by.

For example, during the Our Father, depending on what language it is said in, you will hear a few stubborn people who say it “their way,” in the other language, so as not to let the “other side” win. Planning a bilingual liturgy can be a careful balancing act; deciding what will be said, sung, or read in English or Spanish can be something like a political negotiation; no one wants to make the “other side” feel slighted, everyone wants to be well represented.

In the life of the typical West Texas parish there are also many places and people where the organic fusion of culture is evident (many of my dearest friends from Brady have never shown me anything but great love and brought me much joy), but there are still those places where strict, racial lines are the unspoken law—including the Mexican side: you hardly find a Guadalupana (a member of a traditionally Mexican woman’s society) who is of European descent.

What does this have to do with Our Lady of Guadalupe? Well, it is a modern version of what the story means for so many Mexicans who adore her and Juan Diego. The title “Virgen Morena” (dark-skinned Virgin) is deeply counter-cultural in a culture like our own where, to this very day, the lighter-skinned person—who may be a Hispaniccriollo or a German-American, or even a light-skinned Negro—is the preferential option for power; anyone other than that model is a notable exception. 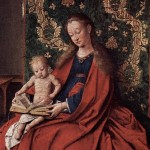 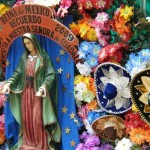 December 13, 2015 Cosmos: Weakened Edition, 11
Recent Comments
0 | Leave a Comment
"So you in fact did not vote for the lesser of two evils but instead ..."
gethoht Hunter S. Thompson’s Fear and Loathing ..."
"Wait a minute, what am I missing? The host must contain some gluten, lest it ..."
RPlavo . The Surprising Anti-Capitalist Logic Behind the ..."
"Gluten intolerance is completely -- and I mean completely -- different from celiac disease. Many ..."
Bobby Lawndale The Surprising Anti-Capitalist Logic Behind the ..."
"Read Bruno's comment: #2 below your ranting comment."
Adrienne Szatkowski Michael Voris’s Stunning and Admirable Broken-Hearted ..."
Browse Our Archives
Related posts from Cosmos The In Lost