How Is Sarah Silverman Right About Jesus Being Gender Fluid?

How Is Sarah Silverman Right About Jesus Being Gender Fluid? December 27, 2015 Artur Rosman

Even though Sarah Silverman is not a theologian, her trolling tweet about the gender fluidity of Jesus does give theologians something serious to consider, if they only have ears to hear.

Here is the tweet that had everybody up in arms:

It is not my job to patrol the internet pointing out when someone is theologically wrong. I’ll be frank: I have finite temporal and intellectual resources. My potential for omniscience never fully actualized itself either. However, I do enjoy engaging those people who get things wrong in interesting ways. The above tweet is one of those examples. As is the Giles Fraser take on, if I may borrow from Fr. Dwight Longenecker, “Our Lady as a Tramp” is another. I’d like to return to Fraser’s interestingly wrongheaded meditation on the Virgin Mary sometime soon.

Parenthetical note for those not in the know: Wikipedia defines “Gender Fluid” as:

Gender fluid is a gender identity which refers to a gender which varies over time. A gender fluid person may at any time identify as male, female, neutrois, or any other non-binary identity, or some combination of identities.

What the Silverman quote betrays, along with the shocked reactions of “conservative Christians” (nothing of the sort, mainly fundamentalists whose beliefs originate in the early 20th century) is, of course, an ignorance of biblical and theological history. This ignorance should not be condemned. It is a teaching moment instead. Yeah, I know, you can take a PhD out of academia, but you cannot take academia out of the PhD.

What follows is a list of three key instances when something like gender fluidity applies to each of the Three Persons of the Trinity.

1.  The theologian Janet Martin Soskice (note the gender fluidity in the name) wrote a whole book on the fluidity of biblical gender language entitled, The Kindness of God: Metaphor, Gender, and Religious Language. Her point is fairly simple and plain for everyone to see. God (“the Father” for Christians) created man and woman in God’s image (Gen 1:27), but also Hosea describes God as mother, as does Deuteronomy in a couple of places, and there are multiple places in the Psalms and Isaiah where the same happens. This is not exclusive to the Hebrew Bible, Matthew 23:37 and Luke 13:34 describe God as a mother hen and in a parable in Luke 15 God appears as a woman looking for her coin.

2. Then there was a medieval explosion of imagining Jesus as Mother. The most famous example you might be familiar with is Julian of Norwich in The Revelations of Divine Love, but if you don’t believe me and want to ignore one of the most important texts of Western mysticism, then you can at least peruse some excerpts on the Vatican website. Other women mystics used the metaphor of Jesus as mother, but it the whole convention did not start with them. In her Jesus as Mother the medieval scholar Caroline Walker Bynum notes that our feminist prejudices might lead us to think that it was women who invented this metaphor, but the truth is:

The first flowering of the image after the patristic period, however, appears to have come in the 12th century in the works of men: the Cistercians monks Bernard of Clairvaux, Aelerd of Rievaulx, [etc.]

By the way, this implies that the image of Jesus as Mother was also around during the patristic period, therefore not a random invention of the medieval period.

3. The Holy Spirit is an interesting case in point. The Greek word for spirit, pneuma, is neuter therefore escaping any easy identifications with any specific gender (ergo: gender fluid). However, the word “spirit” is actually feminine in the Hebrew in which the Old Testament was written and in the original Aramaic that Jesus probably spoke. Therefore, it should come as no surprise that there is a whole tradition of Syriac pneumatology that tends to gender the Spirit (provisionally, as is the case with the Father) as feminine. I first discovered this fact while going through the book After the Spirit, which borrows from Eastern Christian sources that go beyond the usual Greek and Russian Orthodox authors.

After all this, I’m grateful to Sarah Silverman for the troll because it reminded me me to think about these aspects of Christian theology that are unfamiliar to most practicing Christians in the orthodox traditions, not to mention the fundamentalists whose thought is grounded in the gender combats typical of very recent modernity. She was right about gender fluidity, but I bet she never thought of Jesus as Mother!

There is one additional thing to remember. Oddly enough, I can’t remember whether I picked this up in Przywara’s Analogia Entis or Herbert McCabe’s God Still Matters, but gender is not grounded in humanity, but in God–as in Genesis 1:27.

This is a reversal of the argument Feuerbach advanced in The Essence of Christianity where he argued God is merely a projection of human experience and the concepts derived from it. Classical theology has always taught that our notions of masculinity and femininity, of fatherhood and motherhood, are derived from God in whom they originally reside. God is prior to us, and the rest of Creation, both chronologically and ontologically. This is why the medieval mystics could even speak of Jesus as Mother, after all, the world was created in and through Him.

I suppose after all of this both Sarah Silverman and U2’s classic from their best album, Achtung Baby, are a little less scandalous. I mean, none of this stuff is the truly scandalous Song of Songs!

For more of my thoughts on gender and images of God see: The Consequences of God’s Maternal Thinking for Theology.

We’re having trouble keeping up with our bills, so please consider making a motherly donation to this blog through the PayPal button on the right side of its hompage.

December 26, 2015
We are not Only to Become Christians, but Christ!
Next Post 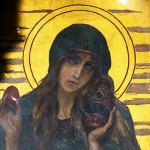 Happy New Year: Advent is Back
Catholic Bard
Related posts from Cosmos The In Lost