The Catholic blogosphere has seen its own share of debate about whether Catholics can in good faith vote for Democratic Socialist Bernie Sanders. The suggestion of his potential viability understandably caused some outrage for not only those who reject abortion, but also those who oppose the expansion of government. The former remains an extremely troubling issue for Catholics who might want to vote for the Vermont senator, however the latter is only a superficial impediment.

Mindy Selmys recently wrote several articles about Catholic teaching on the necessity of government. In her latest post she gives the following rundown of the need for a redistribution of wealth through the proper channels:

Simply put, nobody comes to be wealthy by means solely of their own activity and merit. All wealth is acquired by taking something which originally belongs to the whole human race and claiming it as a private possession. It’s okay, in fact it’s good, to do this – but only provided you recognize that you then have an obligation to the rest of the community in justice. Not merely in solidarity. Not merely out of the good will of your own heart. Not as an expression of superabounding charity. What you own, you own for the sake of the common good: “In his use of things man should regard the external goods he legitimately owns not merely as exclusive to himself but common to others also” (Gaudium et Spes, 69).

How does this play itself out in relation to the richest candidate in the American presidential candidate field, Donald Trump? The BBC reports Pope Francis sees Trumps unwillingness to acquiesce to the universal destination of goods by building a wall to protect American wealth extremely troubling:

Pope Francis said “a person who thinks only about building walls… and not of building bridges, is not Christian”.

Calling himself a “proud Christian”, Mr Trump blamed Mexico for the Pope’s remarks, calling them “disgraceful”.

Mr Trump has alleged that Mexico sends “rapists” and criminals to the US.

Pope Francis made the comments at the end of a six-day trip to Mexico.

“A person who thinks only about building walls, wherever they may be, and not of building bridges, is not Christian. This is not the gospel,” he said.

Trump’s position is only the most extreme example of the Republican mainstream’s measures to get rid of what they see as an immigration problem. Their obsession with keeping immigrants out of a country of immigrants is so surprisingly un-Christian that Pope Francis did not quite believe that anyone in the position of being elected president could have actually said deporting and building walls could be a real solution:

He declined to say whether Americans should vote for Mr Trump, who is leading the Republican race for president.

“I say only that this man is not Christian if he has said things like that. We must see if he said things in that way and I will give him the benefit of the doubt,” the Pope said.

The pope’s incredulity might stem from an awareness of how much the United States depends economically upon illegal immigrants. Walling off and extraditing immigrants as Trump has proposed, instead of finding more avenues for legalization, would be disastrous for the economy.

Fr. Pablo of Patheos Catholic reiterated the traditional Christian concern for justly treating refugees with the help of Pius XII. Pope Francis did not make it up on the run:

Several years after World War II, while Europe still faced a major crisis of displaced people and refugees, Pope Pius XII wrote the Apostolic Constitution Exul Familia Nazarethana where he addressed the need for nations to open their doors to these people and encouraged pastoral action by the Church. Citing the Holy Family as the archetype of every refugee family, he invoked their protection over all migrants and refugees who “whether compelled by fear of persecution or by want, are forced to leave their native land, their beloved parents and relatives, their close friends, and to seek a foreign soil (EF ¶1).”

In his “Thoughts from a refugee” Fr. Pablo adds the following words about what can and should dictate policy:

Each nation has the responsibility to protect its borders and determine who is allowed to cross them. In developing immigration policy, the Church encourages government leaders to be compassionate, recognizing the humanity of each person who approaches. By traveling to the US-Mexico border this month, Pope Francis reminds the world of his words to Congress: “if we want security, let us give security; if we want life, let us give life; if we want opportunities, let us provide opportunities.”

In a world seeing its greatest refugee crisis since the time of Hitler (Jane the Actuary estimates only the world’s landless refugees at somewhere around 60 million!) can Catholics afford to vote for candidates who want to keep refugees out of fear and a desire for xenophobic votes? Can they do so when Holocaust historian Timothy Snyder recently made the argument in his Black Earth that a failure to respond to the present refugee crisis could lead to another springtime for Hitler? 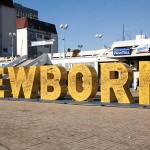 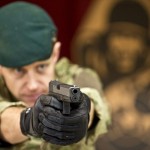 March 1, 2016 Mount St. Mary's President Pulls Glock on University, Gets Fired
Recent Comments
0 | Leave a Comment
"Wait a minute, what am I missing? The host must contain some gluten, lest it ..."
RPlavo . The Surprising Anti-Capitalist Logic Behind the ..."
"Gluten intolerance is completely -- and I mean completely -- different from celiac disease. Many ..."
Bobby Lawndale The Surprising Anti-Capitalist Logic Behind the ..."
"Read Bruno's comment: #2 below your ranting comment."
Adrienne Szatkowski Michael Voris’s Stunning and Admirable Broken-Hearted ..."
"Science needs "a confession of sins and an articulate profession of faith"? Seriously?Certainly, individual scientists ..."
Elzbieta 2 Reasons Why the March for ..."
Browse Our Archives
get the latest updates from
Cosmos The In Lost
and the Patheos
Catholic
Channel
POPULAR AT PATHEOS Catholic
1