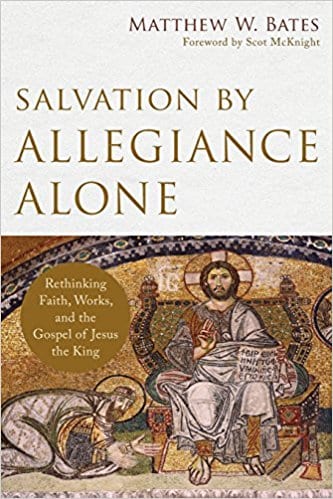 About two years ago, Matt Bates was traveling in Oregon and we had a chance to meet up for the first time. He heard that I was working on a book on Paul’s faith language, and I knew he was writing his Salvation by Allegiance Alone (SBAA; Baker, 2017). It is nice now to see the end product, though sadly my own project is not going to see the bookshelf for a while longer since I am not quite done yet.

In many ways, I wish Matt’s book didn’t need to be written. While I deeply appreciate his thoughtful discussion of this subject, to me it represents a reading of Scripture that should simply be clear and assumed, rather than something needing such careful defense. But the reality is that there is a history of scholarship that has locked “faith” (pistis) into being something cognitive, a non-work, and even some have referred to it as “passive”! Matt does a fine job of connecting pistis in the NT to the broader idea of commitment to the kingship of Jesus, the kingdom of God, and what it means to trust God. I will not take the time to give a thorough summary (see HERE), but rather I will give a few points of consideration.

Strengths: The idea that pistis is a polyvalent and polysemous word has been long

acknowledged, and volcanic pressure has been building against a passive or merely cognitive view of pistis such that Matt’s work serves as a major eruption point. As Matt acknowledges himself, this is a broader look at the word pistis, how it functions as allegiance or trust language, and how one can assimilate that within a kingdom perspective on the Christian faith. The way he constructs this broader biblical-theological perspective is refreshing, clear, and thoughtful. And Matt is disarming with his humor, which helps the reader ease into what could be a tense subject. Matt also masterfully connects pistis language across the NT, trying to be careful not to operate with a canon within a canon – this is much harder to accomplish than one thinks. Finally, Matt handles thorny questions and potential pushback with wisdom and aplomb, especially related to questions about judgment and works (see esp. ch 5). You can tell this material has been “classroom tested” because he has anticipated the most pressing questions and responds to them with thoughtful answers – the answers are not simple or “neat,” but if they were I would be very disappointed.

Random Note: Matt – my friend – you sound very Wesleyan in this book. Just an observation (*I will wait patiently for your further awakening*)

Other considerations: Again, I want to acknowledge that I have studied the use of pistis in Paul (and the Synoptics) rather carefully over the last several years and in the main I am in hearty agreement with Matt’s arguments in Salvation by Allegiance Alone. Still, in the spirit of ongoing dialogue, I want to raise some additional considerations.

When I saw the endorsements for SBAA, I thought, “wow, Gary Anderson, Scot McKnight, Mike Gorman, Mike Bird, Josh Jipp – these are great conservation partners and allies.” It is also a testimony to Matt’s rich teaching. There have already been critics, but I know Matt welcomes the dialogue, including pushback. Congrats to Matt on this – and I hope many will read and engage in Salvation by Allegiance Alone.

May 12, 2017 Gowler -Parables After Jesus Part 2 (Gupta)
Recent Comments
0 | Leave a Comment
"I have worked extensively on Colossians, I even wrote an article on authorship, the arguments ..."
Gupta Nijay Newell Lectures ’21| Hidden Christian Figures: ..."
"I am in broad agreement. Have you read the 2018 article in ZNW: "Euodia, Syntyche ..."
Richard Fellows Newell Lectures ’21| Hidden Christian Figures: ..."
"I found Jerome Walsh's commentary in the Berit Olam series to be outstanding. It is ..."
Brian Small My Top Six OT Commentaries: 1-2 ..."
"Thank you again for another good list - but I confess puzzlement at the absence ..."
Jim Gordon My Top Six OT Commentaries: 1-2 ..."
Browse Our Archives
get the latest updates from
Crux Sola: Formed by Scripture to Live like Christ
and the Patheos
Evangelical
Channel
POPULAR AT PATHEOS Evangelical
1