We are continuing a short series on David Gowler’s The Parables After Jesus (Baker; PART 1)

Here we will look briefly at chapters 3 and 4, respectively on the interpretation and use of the parables in the 16th-17th centuries, and on the 18th-19th centuries.

Chapter 3: “The Afterlives of Jesus’ Parables in the Sixteenth and Seventeenth Centuries”

Here Gowler examines ten case studies, we will just mention a few of these. The first is Martin Luther. Luther rejected allegorical interpretation, calling it “stupid.” He promoted a more simple approach which drew out the plain meaning, though Luther himself did not discount the possibility of symbolic meaning. As can be expected, Luther focused his interpretation of the parables on Christ. When it comes to the parables, they often focus on moral behavior and good works. How does Luther handle this? According to Gowler, as far as Luther was concerned, “The ‘works’ are outward signs of one’s inner faith…Works do not make anyone good; instead, works bear witness to the genuineness of one’s faith” (120).

I was also fascinated by Gowler’s discussion of Shakespeare’s interest in the Synoptic parables. Apparently, Shakespeare was especially infatuated with the plot and themes of the Parable of the Prodigal Son – sibling rivalries, rebellious children, mercy, restoration, etc. Gowler notes how Shakespeare alludes or tips his hat to the prodigal son in numerous works such as Comedy of Errors, Love’s Labour Lost, King Lear, Timon of Athens, Twelfth Night, The Winter’s Tale, and Two Gentlemen of Verona. 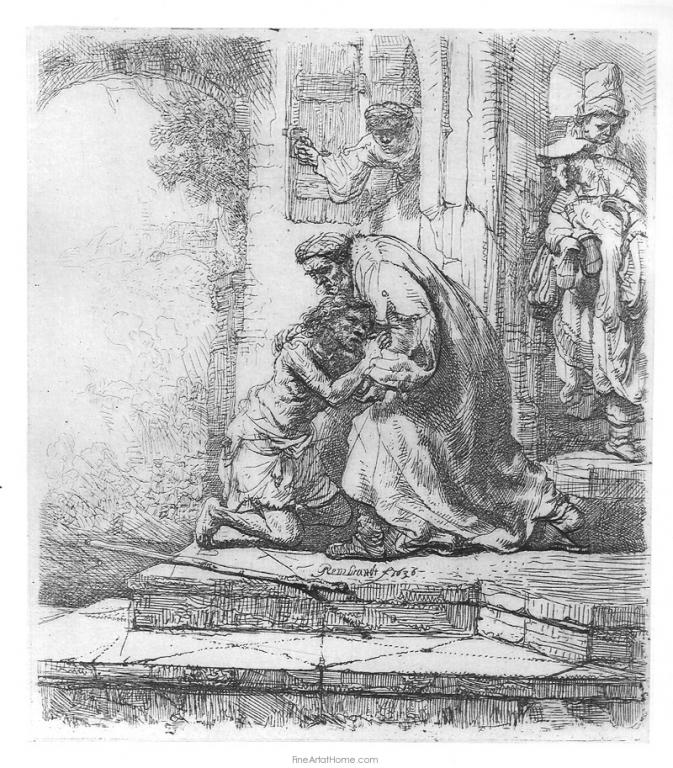 Perhaps my favorite case study in this chapter is Rembrandt. While Rembrandt famously portrayed many biblical texts in his artwork, he did few on parables, though when he did, they all came from Luke (152). Rembrandt’s painting of the Return of the Prodigal Son is especially famous, though he did more than one version of the scene (see image). It is especially satisfying that Gowler included artwork images throughout the book.

Chapter 4: “The Afterlives of Jesus’ Parables in the Eighteenth and Nineteenth Centuries”

There are nine case studies here, including Fanny Crosby and Charles Spurgeon, but I will briefly mention tidbits about Leo Tolstoy and Emily Dickenson.

Tolstoy was not shy about criticizing the structured and dogmatic Christianity of his day. He longed for the simple way of Jesus that focused on love of God and love of neighbor. He wrote a story called “Where Love Is, God Is” and drew from his own reading of the Parable of the Sheep and the Goats. Dickenson also took interest in this Parable, which inspired a poem based on Matthew 25:35 called “I bring an unaccustomed wine.” Dickenson’s interest in and use of the parables is not just thematic, but perhaps also hermeneutical, as her reflection on poetic communication seems to align with the riddling nature of parables.

Tell all the truth but tell it slant–

Too bright for our infirm Delight

As Lightning to the Children eased

The Truth must dazzle gradually

Or every man be blind

Again, very insightful chapters, lots of fun learning, and prods the reader to follow up on many of these interpreters of the parables.

May 16, 2017 Status, Ambition, and the Way of Jesus, Craig Hill (Gupta)
Recent Comments
0 | Leave a Comment
Browse Our Archives
Related posts from Crux Sola: Formed by Scripture to Live like Christ