Why I Believe in Women in Ministry: Part 19 (Gupta)

Does 1 Timothy 2:12 Prohibit Women from Leading and Preaching over Men in the Church?

For those who argue that women should not be preachers, elders, or leaders (over men) in the church, they often appeal to 1 Timothy 2:12 as their most direct and clear biblical foundation. Here are some questions I want to discuss:

1 Timothy is an occasional letter, not a comprehensive church leadership manual

The “Pastoral Epistles” are situational letters, from Paul to a particular individual (here Timothy) in order to address certain circumstances. Now, all of Paul’s letters contain some general teaching. But, sometimes, his teaching is more limited to one situation. Only the literary/rhetorical and socio-historical context will tell us whether the teaching is “once and for all.”

Scholars continue to debate whether Paul actually wrote 1 Timothy, or if perhaps it was written in a later era by someone else. My own view is that it probably has some historical connection to the apostle Paul. I admit its style of writing and argumentation don’t match letters like Philippians and Romans, but I don’t see any contradictions in theological teachings when 1 Timothy is compared against the so-called undisputed letters.

8 Therefore I want the men everywhere to pray, lifting up holy hands without anger or disputing.9 I also want the women to dress modestly, with decency and propriety, adorning themselves, not with elaborate hairstyles or gold or pearls or expensive clothes,10 but with good deeds, appropriate for women who profess to worship God.

11 A woman should learn in quietness and full submission.12 I do not permit a woman to teach or to assume authority over a man; she must be quiet.13 For Adam was formed first, then Eve.14 And Adam was not the one deceived; it was the woman who was deceived and became a sinner.15 But women will be saved through childbearing– if they continue in faith, love and holiness with propriety. (NIV)

While Paul has some very firm commands to pass on to the Ephesian church through Timothy, one can’t help but notice that he argues in this manner:

The prohibitions (2:8, 9, 12) included here lead me to believe there were serious problems going on in this church precisely on these matters. I think it is fair to assume men were disputing and creating a ruckus. Women were flaunting wealth. And, thus, I take 2:11-12 to be referring to clear misbehavior on the part of some of the Ephesian women.

If we take this as corrective teaching, we can better understand Paul’s harsh tone. Paul recognizes this church has been infected with many diseases of false teaching, in-fighting, and genderized furtive behavior—and he calls the theological physician, Timothy, to put the church on a very strict lifestyle and diet.

What Does “Assume Authority” (NIV) Mean?

This is where things get really tricky. When Paul normally talks about authority (power and leadership over another), he uses kyrieuo (rule over; w.g., Rom 7:1), or some form of exousia (e.g., Rom 13). These are relatively common word groups. But here in 1 Timothy 2:12 Paul uses an extremely rare and unusual Greek word authenteo. It occurs less than a dozen times in ancient Greek (first century AD and prior). Compare that to exousiazo (“to have authority over”) which occurs over 900 times in ancient Greek. We will get to what authenteo means in a minute, but just take a second to think about this: why would Paul choose such a rare word unless it fit a strange and rare situation?

So what does authenteo mean? Many English translations render it as “have/exercise authority” in a neutral/positive sense.

HCSB: “to have authority”

RSV: “to have authority”

Essentially, then, these translation treat authenteo as a synonym of exousiazo. But, again, if they are so close in meaning, why choose such a rare word?

Based on the meager evidence we have for how ancient Greek writers used authenteo (and other words based on the same root), another set of translators believe it has a more negative meaning of domineer (especially based on other forms of the root).

So the King James: “to usurp authority,” and the NIV seems to have moved in this direction: “to assume authority.” This kind of meaning is supported by the Latin Vulgate translation which reads dominari  (from which we get the English word “dominate”).

To my mind, it would make all the sense in the world that Paul would choose this rare word authenteo if Paul wanted to tell women not to try and dominate over men with their teaching or power. In this kind of situation, Paul would not be rejecting women who want to be equal in the church. He would be demoting women who want to seize total control.

Chew on this #1: It is hard for lay people to fully understand just how rare the usage of authenteo was at Paul’s time. So think about it this way: have you ever used a word that (1) you will never use again, (2) you will never hear from another person ever, (3) and will never read anywhere ever again? That is how unusual it would have been for Paul to use authenteo. So why would he not have chosen a more common word if he was giving a direct and clear universal command through a third party (Timothy)?

What about the Appeal to a Creation Story?

Some interpreters argue that women (universally) are taught here to be submissive to men because of the appeal to Adam and Eve in 2:13-14. Certainly when Paul points to key Old Testament stories, he has a broader point in mind. But the focus of this Scriptural appeal is not based on the inherent superiority of men due to privilege of the firstborn. After all, Paul elsewhere places the majority of blame on Adam, not (Rom 5; 1 Cor 15), not Eve. The mentioning of Eve’s deception by Paul is his way of humbling any arrogant Ephesian women who want to cause trouble for the men, believing they were wiser.

Chew on this #3: How could the same Paul who (supposedly) told women to be quiet in church and listen to the men teach also send Phoebe to deliver Romans and commend her as his patroness and deacon/minister? How could he maintain such a cordial relationship with Priscilla who certainly was not quiet in her leadership?

I understand this passage to be corrective of a disturbingly imbalanced situation in Ephesus where women were intentionally trying to domineer over men. Paul’s concern is not to force women into submission in the church under men, but to cultivate a healthy community by rebuking troublemakers. Everyone should learn peacefully and cooperatively.

This is a very complex discussion with many moving parts, so those with some Greek knowledge and training might want to read more. See below: 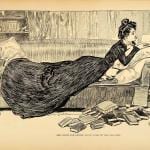 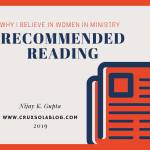 June 7, 2019 Why I Believe in Women in Ministry: Part 20 (Gupta)
Recent Comments
12 Comments | Leave a Comment
Browse Our Archives
Related posts from Crux Sola: Formed by Scripture to Live like Christ