As some of you know, I am intensively researching for a book on women in the New Testament and women in the Roman world. Recently, I was delighted to come across a small, and not well-known, inscription of an ancient woman named Aufria (2nd century CE). Apparently, she travelled to Delphi as a guest speaker at their Pythian games (kind of like our “state fair” but with more competitive sports). She was an educated woman. Classicists Mary Lefkowitz and Maureen Fant refer to her as a “woman of letters.” She regaled the crowds (of presumably men and women) with interesting lectures. I will present the whole inscription below, but this is important evidence that some women had elite education, they were not confined to the home, they were not just known as a companion/counterpart to their husbands, and men did not immediately scorn an educated woman. She probably wasn’t the first female public lecturer in history, but she appears to me to be the earliest record we have of a female public lecturer teaching in front of a large crowd who heard lecturers as a form of entertainment.

So, basically, she is now one of my heroes.

With good fortune. The city of Delphi has decreed that Aufria of…[word is damaged/unclear] is citizen of Delphi, since she was present at the festival of the god, and demonstrated the entire range of her education, and delivered many excellent lectures at the assembly of Greeks at the Pythian games… 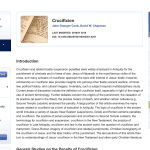 June 28, 2020
Amazing Resource: Do You Know About Oxford Bibliographies Online?
Next Post

July 1, 2020 Hebrews: 5 Books Every Pastor Should Read
Recent Comments
0 | Leave a Comment
"I am of the opinion that Pastor # 1 had the more appropriate answer. Of ..."
KRW “We Should Be More Like the ..."
"Should also mention EA Speiser's Anchor Bible commentary and especially Claus Westermann's three-volume commentary. Although ..."
robrecht New Blog Series: “My Top 6 ..."
"Go back early enough and one finds that there was no 'early' church, but at ..."
klatu “We Should Be More Like the ..."
"Most of the time, the early church were cantankerous, judgmental and disagreeable iconoclasts. They couldn't ..."
Roger Morris “We Should Be More Like the ..."
Browse Our Archives
get the latest from
Crux Sola: Formed by Scripture to Live like Christ
Sign up for our newsletter
POPULAR AT PATHEOS Evangelical
1

What “The Rise and Fall of...
Between Two Kingdoms
Related posts from Crux Sola: Formed by Scripture to Live like Christ