Adam Winn has written a really engaging historical fiction story of Jesus in his last days and the circumstances that led to his death “on the ground level” so to speak. Winn took some time recently to talk about conceiving of and writing this fascinating work. I admire the grit and wisdom it takes to pull of historical fiction, which he does so well. Read this book! 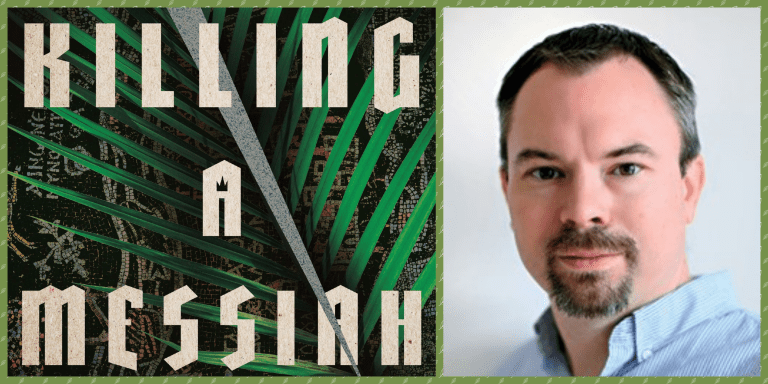 What inspired you to write Killing a Messiah?

AW: For many years I had an idea for a book on the death of Jesus, a book that focused on the historical realities that led to his crucifixion. The book would offer a unique understanding of the roles played by both Pilate and the Jewish authorities in Jesus’ death, but it would also address widely held misconceptions about the passion week, particularly misconceptions that have long contributed to anti-Semitism in the church. I first pitched the book as a more popular level academic book to IVP in 2015, and they were interested. But I begin questioning how affective such a book would be. Who in the church would actually read it?   That is when the idea of writing the book a historical fiction hit me.  People like stories and stories are powerful media for teaching and transforming people’s thinking. But could I pull it off?  I had never written fiction before. There was only one way to find out, so in December of 2015 I started writing the first couple of chapters of Killing a Messiah.  To my surprise, the story started to flow, and I felt I actually might be able to do it.

I am terrified at the thought of writing fiction. I know this would have been hard and required a lot of research. How did you go about preparing to populate a whole ancient world of characters, settings, and events?

AW: I was certainly nervous to attempt fiction, and even more nervous let people read it!  But writing it was far easier than I thought it would be. Let’s face it, the biblical text and ancient historians had done a lot of the work for me in terms of populating a world of characters, settings, and events.  Pilate, Caiaphas, Jesus, and Judas were already there for me to work with!  As was Jerusalem, the Temple, Galilee, Caesarea.  While I certainly had to “create” certain events for good story telling, I was aided by a series of events already laid out in the Gospels. For these reasons, I think historical fiction is a lot easier than pure fiction.  And while it did require research, I found that over twenty years of academic study of the biblical world (as well as living a short time in Israel!) made things a lot easier.  My research had been accumulating since I started a BA in biblical studies in 1995!  Now I was just putting the pieces together.  With all those pieces already in place, creating new characters, events, and settings came pretty naturally.

Academics are trained to do stuffy articles and boring books. We do not do fiction! How did you tackle the project as a work of engaging fiction writing? (e.g., suspense, drama, good dialogue)

AW: You are right, we don’t!  Or at least not many of us do.  When I have been asked this question before, I usually say, “I started writing, and the story just came out.” That is pretty much the truth.  But I could break that down a bit more. I started with an idea for the way the passion narrative unfolded and what roles the major players like Pilate and Caiaphas had.  From their I just needed a story to convey the idea.  I started with four perspective characters and planned to tell the story through their eyes. I put together a simple sketch of each character and a very general sense of their plot line. Those were my starting points and from them I just started writing. I knew where I was going, but even I didn’t know exactly how I was going to get there with these characters. I took it scene by scene, creating one thing after the next as it came to me.  The truth is sometimes I was even surprised by what I had these characters do or say. I can honestly say, I didn’t know exactly how all the strands would come together when I started, but in the end they came together very naturally.  I did go back and rework some things or added material here or there, but the final product was not that much different from the rough draft that I basically wrote from beginning to end.  It was the most enjoyable thing I have ever written!

Who are your fiction author role models?

AW: This is a good question and one I really haven’t yet given much thought to. Obviously, the excellent fictional work of biblical scholars like Bruce Longenecker and David DeSilva were important role models for showing me what was possible. Without them I am sure I would have never attempted fiction. But I don’t know how much they shaped my style or storytelling.  I love reading fiction, and I know my writing is certainly shaped by that fiction. Yet, I am not sure I can say I have any “role models” or people I knowingly emulated in the process.  I read a lot of crime and suspense novels from authors like John Grisham and Michael Connely, but I also read a good bit of fantasy fiction as well from authors like J. K. Rowling, George R. R. Martin, Robert Jordan, and Patrick Rothfuss.  I think you can probably see these influences all converging in Killing a Messiah (though I make know comparisons in the quality of writing!) In many ways, the plot flows a lot like a crime novel, with twists and turns throughout, but the world building and scene description is more akin to what you see in the fantasy genre (though don’t expect wizards or fairies).  I know my choice to use perspective characters and to weave their stories together into a cohesive narrative was consciously patterned after George R. R. Martin’s series A Song of Fire and Ice.  Beyond that, I think all other influences were likely subconscious.

Has this process and experience inspired you to do more historical fiction?

AW: I have definitely thought about writing more historical fiction, and because this book was so much fun to write, I think it is likely I will at some point.  I have a number of ideas in mind, including a sequel to Killing a Messiah. But to some degree those decisions will be dictated by the success of this book and publisher interest in additional books.  I do think fiction is an excellent way to bridge the gap between scholarship and the church, and I hope other scholars will consider it as a medium for doing just that.

What’s next for your research and writing?

AW: Well, for now I am back to writing plain old scholarly stuff.  I am currently contributing to a book entitled Mark’s Christology: Four Views (Zondervan), which includes original essays and responses from Sandra Huebenthal, Larry Hurtado, Daniel Kirk, and myself (Anthony Le Donne is editing).  I am also working on a multi-book project with David Wilhite (Patristics scholar, Baylor Univ.), which takes a unique approach to the question of early high Christology and Jesus’ divinity in the New Testament.  It also offers some revisioning of Jewish monotheism in the Second Temple period as well. My essay in the Mark volume will give a sneak-peak into this larger project.

July 8, 2020
Book Review: Jesus and the Forces of Death, by Matthew Thiessen
Next Post

July 8, 2020 Mary Beard's British Museum Lecture (2017): "Women in Power"
Recent Comments
0 | Leave a Comment
Browse Our Archives
get the latest from
Crux Sola: Formed by Scripture to Live like Christ
Sign up for our newsletter
POPULAR AT PATHEOS Evangelical
1

Evangelical
SeminaryNow: A New Video Platform for Courses in...
Crux Sola: Formed by Scripture to Live like Christ