Supporting Your Asian-American Neighbors: Reflections from My Experiences 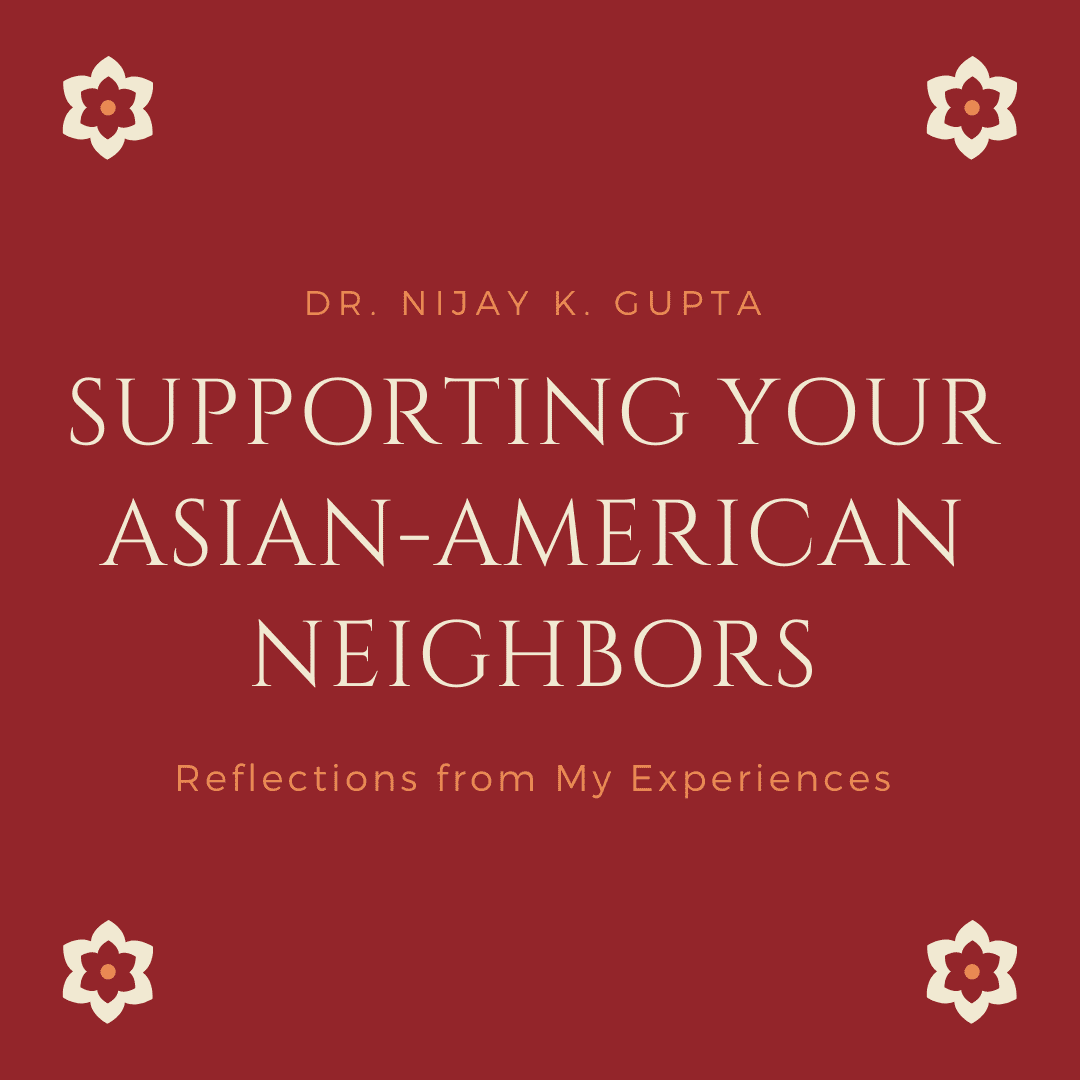 When I heard about the Atlanta shooting, honestly I didn’t even want to read about it. I care, I do, but I am exhausted. Everyday, more bad news. More guns, more violence, more hatred, nothing changes. We exchange words, we say “justice now,” and nothing changes. Yes, I am numb, I am bitter, I am tired. What can I say that will change anything? Maybe nothing. But saying nothing also does nothing. So, here are some of my reflections; they are my experiences, but I hope you might find something here that is helpful for you on your journey to help create a safer and more generous world.

The first incidence of racism I remember experiencing was when my family went on holiday in Europe when I was in middle school. My dad sprung for a fancy room in a nice hotel, but when we arrived I remember hearing him arguing with the front desk (we had lots of bags with us because were going to go on to India after Europe). Next thing I knew, we were leaving because they “lost” our reservation. That was it, no hotel. Odd, because that literally never happened to us in America. Ever.

The first time I experienced racism was in high school. We took a Latin club trip (yes, I was in the Latin club) to Italy. In Rome, some of the food vendors would not serve me because I looked like a gypsy (they said). This happened to me later on when I was doing missionary work in Eastern Europe. I was with a group of Americans (almost all white). We would order at a restaurant. Everyone else’s food would show up. My food would not. At first I thought it was a coincidence. Then the “coincidence” kept happening. So eventually I gave up and had one of my white friends order themselves two meals.

I could go on and on. There are no quick solutions to these problems. One person can’t make this go away. But if we all make an effort to do the right thing, we can make it better.

Here are some off-the-cuff advice, take it or leave it, from my experience.

What can my neighbors and friends do to support the Asian Americans around them?

Learn our names, Pronounce them correctly

Names are so important. It’s a key part of who we are, often times our heritage and family. My very first job was at K-Mart. My boss couldn’t pronounce my name (so he said) so he changed it. “I’m gonna call you ‘Jay’.” So he did. And I just sucked it up, because, hey, I was 17 and a minority in a white majority small rural town. No social capital. No voice.

When I go to Starbucks, what am I gonna do? For fun, I go by STAR-LORD. My kids get a kick out of that. But do I wish people would be able to say my name correctly? Yes I do. Of course I do.

I like when people ask me if they are saying my name correctly. It’s a big part of being known for who I am. About half the time people say my name incorrectly. That’s my life.

If I say I was a victim of racism, believe it. What have you got to lose? I am super cautious and circumspect about labelling something racist. I reflect carefully on the situation. But if I think it was racism, I’m pretty sure it was. Hear my story, and believe it. That’s not a crime. It just helps me feel less crazy and less alone when people can enter into my story and say, “Yeah, that sucks. No one should be treated that way.”

Don’t assume my life is easy because of “reverse discrimination” and “affirmative action.”

I hear this argument all the time. Minorities have it easy. They get the scholarships. They get special treatment. Let’s be clear. Every time I leave my house, I worry about what might happen to me. At the store. At the gas station. Walking on the street. On vacation. People yell things at me, racist slurs. “Go home.” “Get out of my country.”

Are there any perks to being Indian-American? I don’t sunburn. But there is a lot of crap I have to put up with on a constant basis. Just know that. You chose to live in America, go home (they say). Yeah, I’ve been to India, many times, they see me as American. I get teased there too!

Asian Culture: Be curious and positive, but don’t make me exotic.

I love your people. I love your movies. I love your food. Your people are so smart. Your people are bad drivers. What do you do with Asian culture? Be nice, be positive, be curious, that’s all cool. But don’t make my skin and heritage the only thing you see when you see me. I am an individual. I have hobbies and interests, I watch Netflix too, I follow sports teams, I read the latest books. No I don’t know Sanjay Gupta. Yes we are related (so my dad tells me).

See something, say something.

When someone yells something at me from a car or on the street, presumably something racist (I can’t always hear, they don’t tend to enunciate), I feel very alone at that moment. Like the whole world is about the pounce. I was in San Antonio once, walking around late at night. I was really the only pedestrian around. Someone in a car was driving by and screamed something at me and drove off. I was terrified. I was out looking for food after a long day of traveling. I spent the next hour or so constantly looking around for danger.

If you are around during these kinds of incidents, you don’t need to be “the hero,” but saying something like “Idiot!” to the driver is a little nod like “I got your back.” I don’t actually need someone to come to my rescue (unless I am literally getting pummeled), but just that sense that everyone is not against me, that helps.

Lastly: perhaps most importantly, be friends with people that are not like you.

This will change the world. Not a donation to a cause. Not new legislation. Not waves of social media “likes.” People treating other people as friends, sharing meals, having conversations, seeing the world through each others’ eyes.

March 24, 2021 Exegesis and Hermeneutics Bibliography
Recent Comments
0 | Leave a Comment
"Great review. I’ve had mine for 6 months or so and absolutely love it. It’s ..."
Jack Lee Remarkable 2 (Paper Tablet) for Academics: ..."
"Has there been any exploration of keeping it alive as an open access journal? My ..."
James F. McGrath Journal for the Study of Paul ..."
"I believe that I have put together the best argument which refutes/defeats the supernatural claims ..."
Gary M Journal for the Study of Paul ..."
"Thanks, Jim. Wow, really honored you read and reviewed it."
Nijay Gupta First Review of TELL HER STORY
Browse Our Archives
Related posts from Crux Sola: Formed by Scripture to Live like Christ