His Bright Materials: the Saints and the Forge of God

His Bright Materials: the Saints and the Forge of God August 24, 2015 willduquette 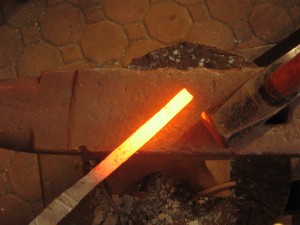 Recently my eldest son left home for good, so we thought, on his way to Air Force boot camp.  Physically he wasn’t a likely specimen for military service, being not at all athletic, and skinnier than a rail with it—in the weeks before he left we had to fatten him up so that he’d meet the minimum weight for basic training—but it was his own idea, something he wanted to do, and so we took him down to the airport and saw him off with many a tear.  He held it together for a month but the physical aspect of boot camp turned out to be too much for him, and he’ll be coming home soon.

I bring this up only because it has led me to ponder the ways in which you train and form people for different vocations.  Boot camp is rather like a forge: you put the trainees into the fire and heat them to white heat, and then hammer them into the shape you need.  It’s hard on the recruits, but it works…so long as the recruits you’re forging are made of iron.

But different materials are good for different things, and are formed in different ways.  You can make heirloom furniture out of cherrywood or mahogany, but you don’t form hardwood the way you form iron.  You don’t heat it to white heat and hammer it into shape; if you try all you’ll get is ashes.  Raw ore must be refined and cast and shaped to be useful; wood, on the other hand, has to be cut down and seasoned, milled and trimmed, cut, planed, glued, and assembled into the final piece.  It’s a different process entirely; you don’t make fine cabinetry out of wrought iron, and you don’t make broadswords out of oak.

It strikes me that the same is true of the saints.  St. Dominic and St. Thomas Aquinas seem to have been saints at the core from an early age.  Reading their lives is like watching a figure emerge from a block of stone or a log of wood under the artisan’s chisels: the figure was always there, it was just a question of removing all of the material that obscured it.

Other saints appear to have put God, the great artisan of souls, to a great deal more trouble.  Fr. Walter Ciszek, whose cause is being actively pursued, spent over four years in Russia’s Lubyanka prison, followed by years in work camps and then poverty in Siberia.  He was taken to Russia at the end of WWII; he returned to America only in 1963.  He was placed into a crucible, melted down, and hammered nearly flat; but his faith and his determination to love God and do His will and serve His people only grew.

For each of His saints God knows best how to bring the pure metal out of the ore, the beautiful grain out of the log, the cut diamond from the rough diamond.  And so too for each of us, because He calls each of us to be a saint and be formed in His workshop.  The process differs for each of us, because we are made of different materials.  But beauty is His goal.  He knows His materials and His tools perfectly and will unfailingly make each of us a thing of transcendent glory—if only we will let Him.

August 23, 2015
Being a Jerk Doesn't Necessarily Make You a Misogynist
Next Post

August 26, 2015 Today's Aquinas: We Love the Good We Know
Recent Comments
0 | Leave a Comment
Browse Our Archives
get the latest from
Catholic
Sign up for our newsletter
POPULAR AT PATHEOS Catholic
1