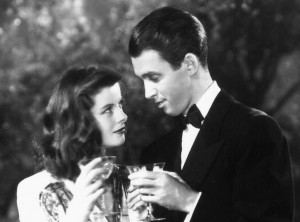 There’s been a great deal of unpleasant discussion in the blogosphere this week, and I don’t intend to add to it; but I’ve been repeatedly put in mind of a scene from the movie The Philadelphia Story. Socialite Tracy Lord, played by Katharine Hepburn, has a romantic moonlight swim with report Mike Connor, played by Jimmy Stewart. Tracy had been drinking rather a lot, and the next morning she can’t remember what happened. She’s dreadfully afraid that she went rather farther than she had intended to.

In fact, she hadn’t. Mike had done nothing more than help her to bed, to sleep it off; and when asked about it the next day, he says so. Tracy has mixed feelings about this; she’s relieved, but her vanity is hurt. There follows this vignette:

Tracy: You mean to say that was all there was to it?

Tracy: Why? Was I so unattractive, so distant, so forbidding or something?

Mike: You were extremely attractive, and as for distant and forbidding…on the contrary, but you also were a little the worse…or better… for wine, and there are rules about that.

And don’t forget to read Vikings at Dino’s!

June 14, 2016 Vikings at Dino's: The Curt Jester's Review
Recent Comments
0 | Leave a Comment
"You should update your bookshelf page accordingly."
3vil5triker . In which the Blogger is Very ..."
"You need to change the "KS" photo. It's of KANSAS CITY, MISSOURI. It is not ..."
Nessy Meme Watch: Economic Bullsh*t
"This has been on my wish list for a while. Sounds like I need to ..."
Rebecca Fuentes The Apostasy That Wasn’t
"Is not the “splendor of heaven” the presence of God in all His glory, of ..."
jayne_wayne Splendor Fatigue
Browse Our Archives
get the latest from
Catholic
Sign up for our newsletter
POPULAR AT PATHEOS Catholic
1