“I walked out of Mass and said, ‘I can’t do this anymore’…”—UPDATED 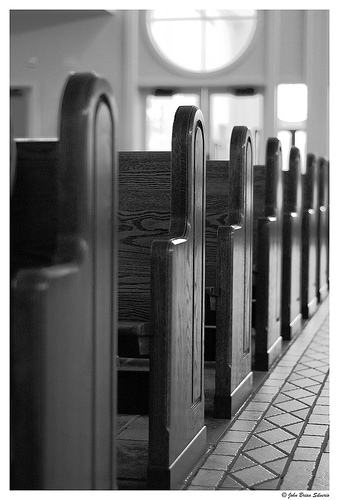 One of the reasons I cried while reading Pope Francis’ stunning and inspiring interview with America magazine last week was because I have been starving for what he’s calling the Church to be. I have been desperate for a shepherd, for someone who wants to meet me in my darkness and walk with me spiritually, for someone who gets up there and tries to meet people where they are – in the real world, struggling with real problems, in a way that actually has some meaning in their lives. That maybe the music lifts us up instead of leaving us shaking our heads. That something, anything, give off even the faintest whiff of meaningful spirituality.

You get a Gospel like we had this Sunday – “No one can serve two masters…You cannot serve both God and money.” – and you choose to drone on for 20 minutes about temperance and prudence and fortitude and justice in a disjointed, monotone, utterly incomprehensible way? I’m sorry, but you’re going to have to do better than that. I look around and see the blank stares, the fidgeting, the eye-rolling (at least in my pew), and it depresses me. It’s not that people are unwilling to listen or that they don’t want to be there. They’re in the church on a beautiful fall Saturday afternoon or early on a Sunday morning. Obviously they want SOMETHING, but it’s not this. I can assure you.

I walked out of Mass last night and looked at Dennis and said, “I can’t do this anymore.” Meaning, I cannot put up with parishes that do not even attempt to lead spiritually, that do not care what their people need, only, it seems, what might take the least amount of effort, like using an old canned homily (and, yes, we can tell). The path of least resistance. Well, I say it’s about time we start putting up some resistance.

Read it all.  What she is calling for is nothing less than, in her own words, a “revolution.”

She speaks for many frustrated Catholics, hungry to be fed, but still leaving Mass famished.

What startled me about this first was the name of the author. Mary DeTurris Poust is a prolific Catholic writer, and the wife of Dennis Poust, the communications director of the New York State Catholic Conference, the public policy arm of the state’s bishops. The Pousts are deeply engaged in the life of the Catholic Church. On her Facebook page, MDT continues:

My great concern is that if someone like me who has been a lifelong Catholic and has worked for the Church for almost 30 years is getting disheartened, what does it mean for the people who wander in hoping to return, what about the people with no catechesis who are just hoping for something to keep them grounded? What is there for them? I know my faith. I know my God. I’m not worried about that. I’m worried about my Church.

Notice, by the way, that she doesn’t complain that the homily she heard was too liberal, or too conservative. It was that it said absolutely nothing. She is begging for bread, and Father is giving her nothing but stones.

This is exactly my own experience as a Catholic — and I know it is the experience of many Orthodox and Protestants, because I’ve heard them say it. I was just thinking this afternoon, writing a piece about Pope Francis’s interview, how my own spiritual starvation in parish life left me with little strength to resist the onslaught of anger and despair from the scandal. It wasn’t that the priests were too liberal and heterodox (though there was some of that; I had grown tired of having to tell my oldest child on the way home from mass that what Father or Deacon preached today wasn’t what the Church teaches, and here’s what the truth is). Far more often than not, it was that they said absolutely nothing. It was as if they were trying their best not to offend anybody. Consequently, they inspired nobody.

Because I write opinion pieces for a living, I used to wonder how the pastor at whichever church I attended could take the Scripture readings of the day and take all the dynamism out of them in his sermon. It must take work, I thought, to make something as vivid as the Gospel, or the letters of St. Paul, or the Old Testament, so bland and so gray in the explication. And then I would go hear a preacher like Fr. Paul Weinberger of the Dallas diocese, and man, he was just great. He preached like he really believed this stuff.

I don’t know how it is among most Catholics, but among the orthodox Catholics, we would remind ourselves that the Eucharist is the Eucharist, no matter how bad the sermon, and how indifferent the atmosphere in the parish. Had there been no sex scandal at all, I wonder where my family would be spiritually. We were so spiritually hungry. But bad homilies are rarely things unto themselves. A priest who does not connect with his people from the pulpit is often disconnected from spiritual leadership and fatherhood in other ways.

As I tried to get across in yesterday’s post, my discontent with my current church experience is not based on a single homily or even a series of homilies or homilies in general; it’s based on the whole package. As a lifelong Catholic who’s been a Catholic journalist for almost 30 years, I don’t take the whole “losing my religion” thing lightly. In fact, just last week I went on a silent retreat specifically because I felt I needed to pray on this and spend time in solitude with God. So, if you don’t know me, try to understand that none of this comes from a place of boredom or single-homily frustration or from an unwillingness on my part to bring something to the table, as was suggested a bunch of times yesterday. This has been years in the making, thanks to one bad experience after another, and it is a cross for me. And what I said yesterday, I said out of love for my faith and my Church and my brothers and sisters sitting in the pews beside me and feeling just as alone and deprived.

When I go to church and nothing – from the six-verse processional dirge to the poor sound system to the inane homilies to the complete lack of community – seems to feed me, well, I tend to ask myself one question, “If I were coming to this church for the very first time, if I were a non-Catholic thinking about becoming a Catholic, would I ever come back?” And nine times out of ten, the answer is a resounding NO!

September 22, 2013
"A man can wear the loftiest of miters without having his head swell to fit it..."
Next Post 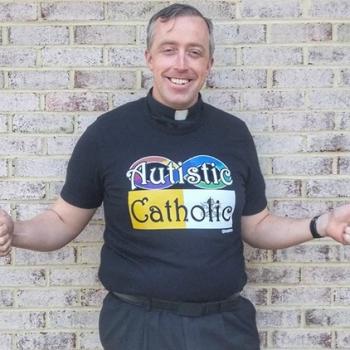 Catholic
Priest Announces: 'I Am Autistic'
The Deacon's Bench
TRENDING AT PATHEOS Catholic