Why did he do it?

It’s a question that often pops up when we hear these readings and observe this Sunday, marking the Baptism of the Lord.

“Why did Jesus get baptized?” He obviously was free of sin. Unlike all the others, he had nothing to repent. Why did he go through this ritual?

Why did he do it?

Theologians have been writing about this for centuries. They often talk about its symbolic importance. St. Gregory of Nyssa compared the baptism in the Jordan to Joshua entering the promised land through the Jordan. St. Ephrem wrote a hymn comparing the River Jordan to the womb of Mary.

But I think the reality is much simpler — and can lead us today to a deeper appreciation of Christmas and the Incarnation.

In short: this moment shows just how much God wanted to enter our world — to be one of us, to live as one of us, to share in all we are, even to the point of being baptized with all the others.

To use a water metaphor, he took a deep dive.

He went all in.

Looking over these readings last week, I remembered the story of Satoko Kitahara.

Satoko was a wealthy young woman who lived in Tokyo in the years after World War II.  She was well-educated, spoke several languages, played the piano and was trained as a pharmacologist.

But she lived in a city in ruins.  Some of the poorest people Tokyo, mostly widows and orphans, lived near the river in a place that came to be called “Ant Town,” because the people were considered as insignificant as insects.

In 1949, while walking through the city, Satoko decided, out of curiosity, to follow a group of nuns into a Catholic church – and was transfixed by what she saw.   Something touched her very deeply, and spoke to her heart.  She was especially moved by a statue of the Blessed Mother, and asked one of the nuns who she was.  She kept going back to the church and, several months later, at the age of 20, Satoko — a Shinto Buddhist — asked to be baptized.

After that, everything changed.  A life of wealth and comfort became less important.

One day, a missionary took her to Ant Town — and Satoko was stunned.  She lived less than a mile away, but had never seen that kind of poverty.  She began spending more time with the people, even helping them pick out rags and junk to sell.

Eventually, she decided that she had to leave her family’s comfortable home and live among the poor.  She said: “To save us, God sent his only Son to be one of us.  He became one of us.  It hit me,” she explained, “that there was only one way to help these rag-picker children.  And it was to become a rag picker like them.”

And so she did. She worked tirelessly for Japan’s suffering children – and eventually began to suffer herself.  She died of tuberculosis, at the age of 28.

Many today are praying she will one day be named a saint.

I think what she understood about Christ, what she grasped about the Incarnation, sheds light on the event we remember today. She got why Jesus went to the Jordan and waded into those waters.

As she put it: “God sent his only son to be one of us.” He came into our world of poor ragpickers and saw something beautiful. And nothing was beneath him.

Christ stepped into the river to experience baptism, and then carried that experience with him—walking with others who had been baptized and who had committed their lives to repentance.

What he did was an act of solidarity and love. It said, “I’m with you.” He wanted to walk with them.

Just as he wants to walk with us.

Christ knows what it is like. He walks with those who have been hurt, betrayed, imprisoned, mocked.

He walks with those who seek refuge.

He walks with migrants and laborers, widows and orphans.

He walks with desperate people running for their lives, seeking a new start in a new place.

He walks with anyone who wants to walk with him, and who seeks a way to the Father.

And he wants us to know: We are not alone. In times of struggle and sorrow. In times of joy ad thanksgiving. He is beside us.

The name we heard again and again during Advent, the name we sang about and celebrated, is the name we need to recall when we hunger for mercy, and consolation, and hope:

Emmanuel. “God with us.”

The baptism in the Jordan reminds us that through Jesus, God is with us — in the deep water, drenched in our humanity.

He became one of us, and went all in. He took the plunge.

Look what we have in return.

The gates of heaven have been opened. Our hearts know mercy. We live in hope.

On the calendar, this feast closes the Christmas season. But don’t think of it as an ending. Today marks a beginning—it recalls the beginning of Christ’s public ministry, and the start of an incredible journey.

It is one that still goes on.

As we prepare to walk forward this day and approach the table of the Lord to receive the Eucharist, remember this:

We walk through the world as different people today because Jesus walked into the Jordan…and then rose from the water…to walk with us. 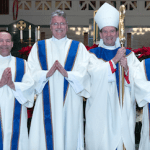 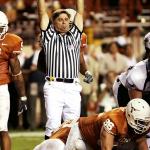 January 12, 2019 Hail Mary pass: Kansas parish changes Saturday Mass time for football game
Browse Our Archives
get the latest from
Catholic
Sign up for our newsletter
POPULAR AT PATHEOS Catholic
1