MUD: McConaughey on the Mississippi is an instant classic

MUD: McConaughey on the Mississippi is an instant classic May 23, 2013 Craig Detweiler

Searching for a movie full of heart and soul?   Mud is a scrappy bit of Americana, hewn from the banks of the Mississippi River.   Filmmaker Jeff Nichols taps into his Arkansas roots to craft an instant classic, like Tom Sawyer, circa 2013.    But Mud isn’t just a sentimental glance back to life on the Mississippi.   It is a heartfelt paean to the power of love amidst trying circumstances.   The crippling effects of poverty may threaten families and undermine stability, but the desire to build a home and a life together keeps us swimming upstream.  Mud evokes the same authentic Southern charm as the best little film of last summer, Bernie.   It is funny and touching, tragic and profound. 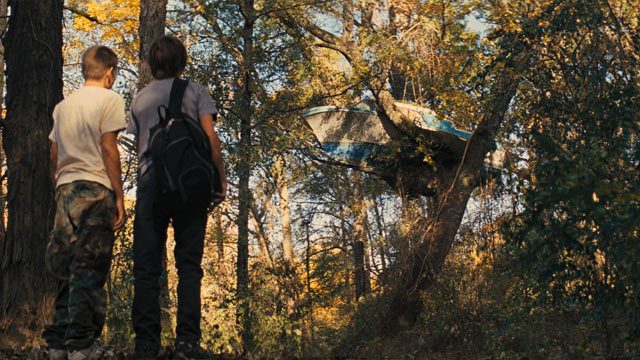 The story commences with a compelling image of a boat stuck in a tree.   The floodwaters of Hurricane Katrina immediately come to mind.   The quiet beauty of the river is contrasted with the snakes that inhabit the waters.   What kinds of lingering mysteries and unfortunate circumstances can still be salvaged?   Two best friends, Ellis and Neckbone navigate an island, searching for adventure a la Huck Finn and Tom Sawyer.    These are poor boys, not likely to succeed in school. 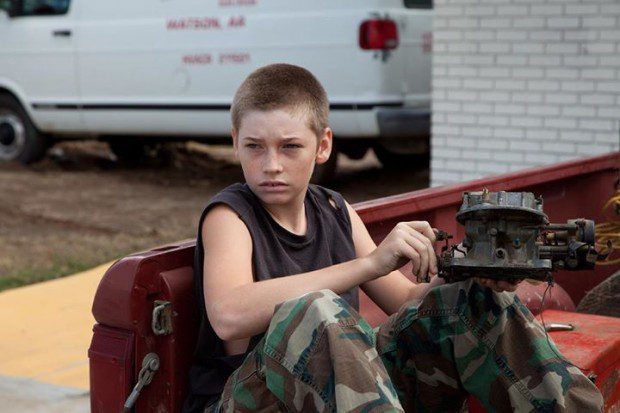 Neckbone lives in a mobile home with his uncle.   He survives on his mechanical skills, an innate ability to make things run.  He also has a cutting, deadpan humor a la Huck Finn.  Ellis is quieter, trying to discern the ways of love even as his parents consider a divorce.    While Neckbone cusses with bluster, Ellis exudes a confidence that allows him to take risks, like punching out a high school senior who is a head taller than him.   At age 14, Ellis believes in defending the honor of an older girl, May Pearl, that he secretly loves.   Chivalry proves costly, especially to a fragile masculine heart. 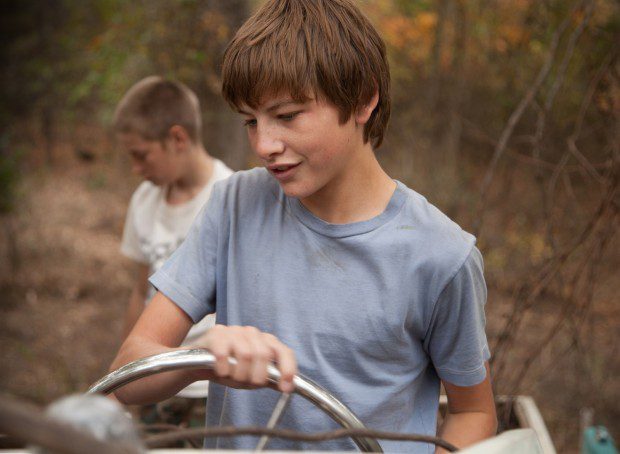 Both boys are searching for a role model, a man who can offer the wisdom they need to balance their burgeoning testosterone.    The boat in the tree belongs to Mud, a local hiding out on a deserted island, waiting for his past to catch up to him.    Mud’s past includes his lifelong crush, Juniper, and the dangerous men she seems destined to attract.    Mud’s problems harken back to the garden of Eden, where Adam, another man made of mud, got in woman trouble.   Will the lovers on the run escape the forces determined to drive them apart?   Will the boys be dragged into the mire, caught in a crossfire much more deadly than they imagined? 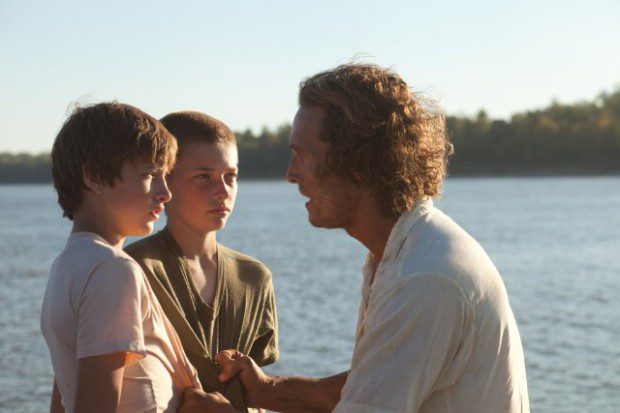 None of this may sound remarkably fresh or original.  But in the hands of a skilled director and actors rooted in the area, Mud rises above genre conventions to become a coming of age tale that transcends time and place.   Director Jeff Nichols never descends into a cheap laugh about the local Piggly Wiggly store or the clichés associated with poor white trailer trash.     This is a film about vanishing values and codes worth preserving.    Mud reminds us that the most special effect is compelling characters caught in a vexing situation.   It is a tender story told with such profound empathy for the rural South that it leaves us almost breathless.

While Mud may garner all kinds of art-house kudos, it deserves to be seen and discovered by those on the margins and in the mini-malls.    We may want our entertainment to be escapist, but Mud is an immersive treat.   Like Ellis and Neckbone, we are pulled into Mud’s dangerous orbit, attracted by his charm, wary of the promises he seems unlikely to keep.  It keeps us hoping and guessing. 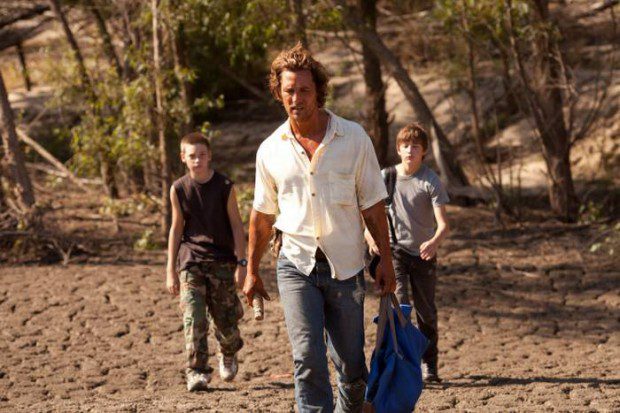 Kudos to the remarkable cast that make these characters so vibrant and vital.  As the titular Mud, Matthew McConaughey has never been better. His Mud feels like an extension of the perpetual adolescent he played in his first feature role, 1993’s Dazed and Confused.   McConaughey plays a character so bruised by bad choices that he keeps his shirt on for protection.   His superstitions have arisen as a defense against a cruel world and an elusive love. 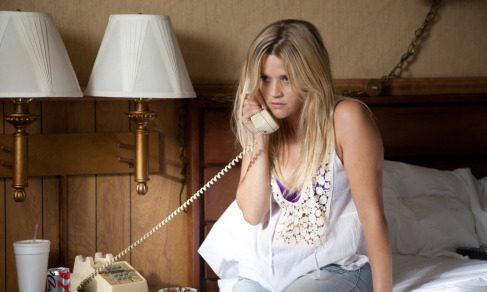 Reese Witherspoon taps into her Tennessee roots to play Juniper, an abused woman who has developed just enough wiles to survive (though never to thrive).   She conveys plenty of pain through her tired eyes.  Sam Shepard plays a surrogate father with complexity and compassion.    Shepard seems to draw upon his own upbringing as an Army brat to communicate the hunger for rootedness that follows a military career. 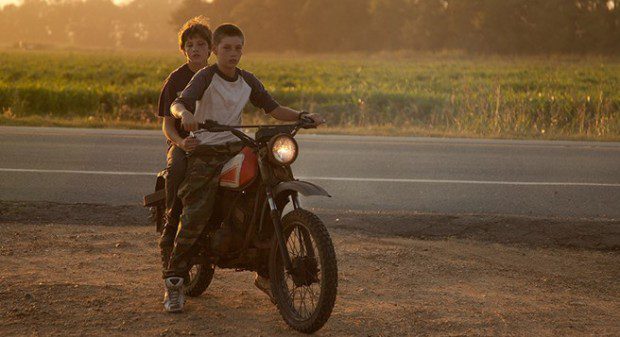 The boys who carry the story have none of the veneer that attaches itself to kids’ raised in or on the Disney Channel.    We ache with Tye Sheridan (Ellis) and Jacob Lofland (Neckbone) in their adolescent transition.    We want to protect their pure hearts from the arrows inevitably coming their way.    Can innocence endure even amidst adulthood?   Sarah Paulson could have easily been cast as the villain, breaking up Ellis’s home.   But director Jeff Nichols resists such easy temptations, helping us understand the modest dreams that arise along the river.   As Ellis’s Dad, Ray McKinnon conveys such decency even amidst disappointment.    (For more Southern Gothic, check out McKinnon’s humane and haunting dramatic series, Rectify, on the Sundance Channel).

Only in the final showdown does Mud dip into shootouts we’ve seen.    But we’ve come to care so deeply about the welfare of these characters, we find ourselves rooting for release.    In a summer that will pummel us with superheroes, Mud reminds us how thrilling Moms, Dads, uncles and kids can be when we stand up for something substantive.   Faith, hope, and love endure amidst the Mississippi mud.

May 10, 2013
Greatest Graduation Speech of our Era? DFW's This is Water.
Next Post

June 5, 2013 FROM TAKING TO RECEIVING: EYES OF THE HEART ALTERS OUR PERCEPTION OF PHOTOGRAPHY
Recent Comments
0 | Leave a Comment
"This was so well-written. I couldn't put my finger on all that the ring symbolized, ..."
Julie Dennis Olson RECONCILING CULTURAL TENSIONS IN CRAZY RICH ..."
"First of all i want to thank you for providing such a wonderfull information and ..."
Baizid Latif THE FINEST FILMS OF 2019: COUNTER-NARRATIVES
"Thank you for the list!"
NCMormon The Finest Films of 2018: Dignity, ..."
"Absolutely love the movie! http://www.iwmbuzz.com/"
Neha Shah RECONCILING CULTURAL TENSIONS IN CRAZY RICH ..."
Browse Our Archives
get the latest updates from
Doc Hollywood
and the Patheos
Entertainment
Channel
POPULAR AT PATHEOS Entertainment
1