My wife is not ‘my Virgin Mary’ (Nativity of the Theotokos)

Patheos Explore the world's faith through different perspectives on religion and spirituality! Patheos has the views of the prevalent religions and spiritualities of the world.
What do I say about Mary Godbearer on this Feast of her Nativity, the first of the Twelve Great Feasts of our church? Every year, a friend of mine from the temple reminds me that my wife shares her birthday with the Theotokos. He’s gotten better. He used to say that she is my Virgin Mary. Please, I replied, that is a little gross.

My friend is Protestant. If he keeps coming to the temple, maybe he will eventually become Eastern Catholic. The learning curve for him, as for all Protestants coming into our churches (like me), has been steep. For example, Protestants like my friend might indeed relish the thought of my wife being my Virgin Mary as if that is somehow romantic. The closest I’ve ever gotten to that kind of thing was when a Filipina nun and I were praying together before I met my wife, and we started praying about the person I might some day marry. Suddenly she said, I see the Blessed Virgin standing next to you. I flipped.

For this overly sentimental view of the Theotokos, I hold responsible what I see as the theological hegemony of secular literary criticism and Protestant habits of looking for signs and symbols in texts and events. This, that, and the other woman in this or that work of literature is always construed as a Marian figure. I first learned about this style of criticism as a high school freshman at the Catholic high school when we read Joyce’s Dubliners. I used to think that that was a little weird, but I also could not unsee what I saw. Soon, every woman in literature became a Virgin Mary. If you’ve taken a medieval history course, you might have heard of the troubadours singing songs to women in court as if they were venerating the Blessed Virgin. In this view, the Theotokos is Woman. I certainly learned to see her that way growing up in the Western churches.

But my objections are neither Eastern nor Western. If anything, they are a protest to a kind of German idealism posing as Protestantism. I appreciate my Goethe as much as any other Eurodreaming romantic at heart (and there are enough readers of mine who worry that my citations of Slavoj Žižek make me a veritable Mephistopheles), but Mary Godbearer is not Gretchen in Faust (Sie ist gerichtet! – Sie ist gerettet!).

It is sort of like that zombie evangelical song ‘God’s Not Dead,’ the Newsboys anthem that is now about to spawn its third movie. God’s not dead, he’s surely alive, they chant in Evangelical Tone 5 Resurrectional (B major), he’s living on the inside, roaring like a lion. Sam Rocha may have complained four years ago that the films were symptomatic of a ‘zombie Christianity’ in the United States (the song, however, is sung by Australians), but as much as he insists on ‘calling protestants protestants,’ I have long appreciated the tune because it is not the kind of Protestantism that most people think of when they think of evangelicals. I know this because I used to be Anglican in Vancouver, one of the epicenters of what is called the realignment, the breaking off of conservative Anglicans from the local diocese over the question of same-sex unions. To justify their split, one evangelical faction accused the diocesan bishop of preaching about a ‘spiritual resurrection,’ which they took to imply that the bodily one was optional. They were correct in some part, as this was indeed the liberal Protestant theologian Friedrich Schleiermacher’s point when he talked about the primary importance of religious sentiments over the historicity of the faith. Of course, it sounded like it was the evangelicals putting words into the bishop’s mouth too, but whatever – what’s done has been done about a decade ago, and all that I’d really like to see my old tribe being consistent too: denounce the God’s Not Dead song and films too.

Just as the risen Lord is not only the Christ of faith but the same Jesus of history, Mary Godbearer is not the Divine Feminine but the one who bore the living God in her womb in first-century Palestine. The irmos for her Nativity makes this point clearly: O my soul, magnify the Virgin Mary born from a barren womb. Virginity is alien to mothers and childbearing is foreign to virgins; yet in you, O Mother of God, both of them came together. Therefore we and all the nations on earth without ceasing we magnify you. This is not sentimental poetry. Mary is the daughter of Joachim and Anna, who are real people that we commemorate weekly at the end of the lytia at Sunday Matins. She bore the Lord though she was a virgin. In her one person in history, virginity and childbearing came together. We celebrate her first birth, knowing that through her Dormition, she has been born again to new life. This is why we can invoke her presence. She is a real person, and she is still alive before the face of the living G-d.

I am not saying that there are not typologies of the Theotokos. There certainly are. She is the Ark of the Covenant. She is the Temple. She is the Church. We bear the Lord in our midst as we gather liturgically. But these are not the romantic ideals of Woman. If anything, Mary is the type of the Christian, and in this sense, normative Christianity is much more feminist than Elizabeth Schüssler Fiorenza ever imagined when she says that she’ll use feminine pronouns in the inclusive sense. To be Christian is to be Marian; as Hans Urs von Balthasar once pointed out, Mary in her capacity as Godbearer is in this way both Mother and Bride of Christ. To embrace this concept is to be truly Catholic, and which I really am because I just managed to cite Schüssler Fiorenza and von Balthasar in one sentence after another.

When I was an adolescent – a real one going through biological puberty, as opposed to my intellectual stuntedness for a time – my mother told me that I’d marry someone like the Virgin Mary. The key word is like. My mom imagined that I’d get married to someone who ponders all these things in her heart. To be fair, my wife is like that. Like Mary, she ponders situations and scenarios, not fantasies and feelings. Paralleling what I’ve learned from my spiritual father, I have learned from her to reflect on things that actually have happened, as opposed to phantom problems and flights of fancy. But apropos of my Protestant friend, she is not ‘my Virgin Mary’ because the Theotokos is actually a person. If there is any similarity between the two of them, it is that they both contemplate the concrete. To be fair to both of them, I must treat them as distinct persons.

Today the Most Holy Theotokos is born. My wife is no more reflective of her than I am, or any other Christian for that matter. Therefore, as we will continue to sing to Mary Godbearer in the irmos well into the postfeast, we and all the nations on earth without ceasing magnify you.

Last year’s post on the Nativity of the Theotokos can be found here. 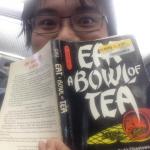 September 7, 2018
I am not a jook sing because I have a home and am Catholic ('I give you three years to narrate yourself' #3)
Next Post 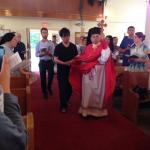 September 9, 2018 To be received as Eastern Catholic in Richmond, to be among the Lord's inheritance (Sunday Before the Exaltation of the Cross)
Recent Comments
0 | Leave a Comment
"I can't believe you would consider the theological lightweight Kilby as a proper critique of ..."
antoniodec Fiat mihi secundum verbum tuum: on ..."
""Milbank criticizes Balthasar for being apolitical in his aesthetic reflections, and I can see how ..."
antoniodec Reading Sobrino on Óscar Romero and ..."
"the word is receptive, which has nothing passive about it but could be the most ..."
antoniodec Fiat mihi secundum verbum tuum: on ..."
"One can never "go home," not in this life."
billwald I’ve found my way home: on ..."
Browse Our Archives
Related posts from Eastern Catholic Person