A face faced by others: for the Venerable Macarius the Great of Egypt

One of the murmurings of discontent that has long followed me from critics of this blog is, I don’t know why his tagline is ‘a face faced by others.‘ My favourite dimension of this critique is that it usually comes from Orthodox converts, typically of the kind that comes from evangelicalism, which means that they seem to conceive of Christian education in their parishes as an extension of the Sunday school that they are used to and continue to use all the same books that I read with the fundamentalists and Pentecostals in Bible college. The more they talked about how they didn’t understand it, the more glee I took in their confusion. My sense is that some of them might even have thought it was a uniate turn of phrase, which gave me even more joy because it just demonstrated how gullible they are when it comes to their inability to differentiate between ideology and theology in what they are taught by those who brought them into Orthodoxy. Deciding to put off explaining it, I think what has ended up happening is that I never got around to it.

I am sure that my critics will feel themselves to be justified when they hear the actual source of a face faced by others. It is Sam Rocha’s Folk Phenomenology, the section where he reads the Greek Orthodox theologian Christos Yannaras on the ‘person.’ Quoting from Person and Eros, Rocha exegetes passages where Yannaras elucidates the prosopon as the Greek word for ‘person,’ which denotes ‘the “eye,” “face,” “countenance”‘ that is turned toward the other (pros or ops). In this way, the person in his or her fullest sense becomes “‘all prosopon“–“all person”‘ (Yannaras, 293). Rocha highlights what this formulation means in its most sensuous sense: ‘The whole person for Yannaras, then, is “all light, all face, all eye” [emphasis mine]’ (Rocha, 99).

When Rocha quotes Yannaras in full, he leaves in Yannaras’s citation of Macarius of Egypt for that last formulation. But it was not from Rocha that I learned of the Venerable Macarius, whose day this is. It was instead in being recommended by my spiritual father during my catechumenate to pray the Morning Prayers and Prayers Before Sleep in the Orthodox Prayer Book published by Holy Trinity Monastery in Jordanville in upstate New York. Especially in the morning prayers, the first four are attributed to St Macarius, a holy monastic that I had thought I had never of until I prayed his words. I liked what I was reading: he speaks a lot of the purity of heart by which we must approach God and asks constantly for the cleansing of his sins, something that I obviously need as somebody who takes joy in the confusion of my readers, so I decided to do more research. Shortly after I was chrismated, I ordered the Fifty Spiritual Homilies of St Macarius. And there, in the first homily, in his exegesis of the first chapter of the book of the Prophet Ezekiel and its description of the four spiritual animals covered with eyes and faces surrounding the chariot of the one enthroned like a son of man, on the very first page, there it was: ‘For the soul that is deemed to be judged worthy to participate in the light of the Holy Spirit by becoming his throne and habitation, and is covered with the beautiful glory of the Spirit, becomes all light, all face, all eye’ (p. 37).

I decided on the tagline of this blog then. If I was going to be Eastern Catholic Person, it was not going to be me representing Eastern Catholicism on Patheos, especially not since we have a number of Eastern Catholic bloggers and have acquired even more since I’ve gotten here. Some accused me when I first started out of blogging far too early in my mystagogy at a time that I did not know anything and the practices were still new, but that was the point. It was that I was pretty sure after my chrismation that the practices of Eastern Catholicism — hesychasm, mystagogy, repentance, diakonia, and ecumenism — were going to shape who I was as a person facing the world and that one of those ways that I knew intellectually at the time was that, as the philosopher Jean-Luc Marion puts it, I’d have a new orientation toward icons: ‘The icon manifests neither the human face nor the divine nature that no one could envisage but, as the theologians of the icon said, the relation of the one to the other in the hypostasis, the person’ (The Idol and Distance, p. 8). Marion posits that the main difference between idolatry and iconography, in other words, is that the idol tends to be a representation of human desire for the divine that is then projected as an image. Icons, however, are persons themselves. I am not just looking at them. They are looking at me.

The mystagogical change that I suspected I’d be documenting as I began this blog while praying the words of St Macarius the Great, then, was that I felt that I’d get a personal re-orientation through the practices of Eastern Catholicism. I have no doubt that some of my readers really hated the first few months’ worth of posts because they tended to demonstrate that I was still very much stuck in my old idolatrous ways while struggling with the truth of the face facing me. Since beginning the blog, I’ve written about a number of things that have shaped my personhood, often in unexpected ways, including my Cantonese upbringing, my dabbling in traditions throughout Christianity, and anti-colonial psychoanalysis, especially in relation to my late engagements with popular culture. But I like to think that I’ve never gotten too far from the original vision, which is to allow the face of the other to look at me and then to engage in a dialogue between persons and not projections. To do that, I have been finding, requires the purity of heart for which St Macarius prays, because to be truly personal, I must be a person myself, competent in who I truly am, and in becoming fully a person, I must become all light, all face, all eye. 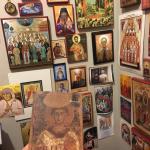 January 31, 2019
Orthodoxy is creative: Rowan Williams on Holy Athanasius of Alexandria
Next Post 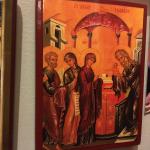 February 2, 2019 Nunc dimittis: on Candlemas for me
Recent Comments
0 | Leave a Comment
Browse Our Archives
Follow Us!

If You're Angry About the Looting...
Steel Magnificat
Related posts from Eastern Catholic Person