There’s a little corner of your brain – the anterior cingulate cortex – that’s thought to play a role in monitoring errors. The electrical signals that flow from this part of the brain ramp up when the mind is challenged with conflicting information, an effect called ‘error response negativity’, or ERN. In short, ERN represents that anxious, uneasy feeling you sometimes get when you’ve made a mistake.

Back in 2009 Michael Inzlicht, at the University of Toronto in Canada, found that religious people had lower ERN compared to non-religious people when trying to complete a challenging task. Religion seemed to be acting as a kind of anxiolytic, a bit like the drug Xanax.

But is it religion, or religious people? Perhaps people who are attracted to religion are just naturally more chilled. Or can you actually reduce anxiety by infusing religious thoughts. In his latest study, he aimed to find out. 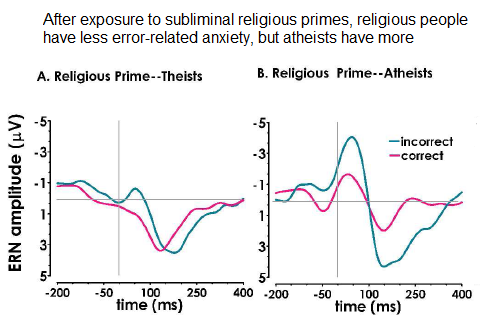 Then he got them to do the Stroop Colour Word Test, a challenging test that generates ERN.

Both the religious and non-religious performed equally well. And, unlike Inzlicht’s first study, there was no intrinsic difference between the two group’s ERN after the neutral prime.

However, for those students that were religious, priming with religious thoughts beforehand reduced their ERN. For atheists, the opposite occurred. Their ERN actually increased if they had been previously exposed to religious messages.

It’s not clear why this should be. Perhaps religion makes the religious feel comfortable, while for atheists it sets up an immediate conflict, so heightening their response. Maybe priming with reassuring thoughts about atheism would have the opposite effect:

“Maybe when atheists think about science, and the way our world is organized through that lens, it would offer them the same reassurance,” suggests Inzlicht. “The point here is the power of the mind to change external circumstances.” Vancouver Sun

It’s also worth thinking about the implications of this study. On the face of it, reducing anxiety sounds like a good thing. But, like the sensation of pain, ERN is there for a reason. It’s there to tell us when we are going down a blind alley, and to motivate us to stop. A low ERN is linked to pathologies such as autism, obsessive compulsive disorder, and attention-deficit hyperactive disorder (ADHD).

In this light, it’s interesting to compare these results with another study earlier this year. This study found that priming with religious thoughts made people work longer to try to complete an impossible task – when the sensible thing to do was to abandon it as a lost cause. What’s more, people primed with religion were actually more anxious afterwards, not less!

July 10, 2010
Forget your worries with religious zealotry
Next Post

July 15, 2010 Who are you?
Recent Comments
0 | Leave a Comment
Browse Our Archives
get the latest from
Nonreligious
Sign up for our newsletter
POPULAR AT PATHEOS Nonreligious
1