Forget your worries with religious zealotry

When animals are made to feel anxious and frustrated, they often turn to displacement activities – goals which may be irrelevant, but which they can at least achieve. Rats may run so eagerly on wheel that they starve themselves to death. Dogs may lick themselves so repetitively that they develop skin lesions. But what do humans do?

One thing we can do, according to new research by Ian McGregor and colleagues at York University, Toronto, Canada, is to become more fervent in our pursuit of cherished ideals. When people are frustrated in their attempts to achieve concrete, real-world goals, abstract ideologies provide a readily achievable displacement goal.

To test this theory, they ran a series of studies on undergrads. Basically, the setup was to make them anxious about failure, either by asking them to complete an impossible task or to recount a troubled relationship they had. Then they measured various religious attitudes, including religious zealotry. 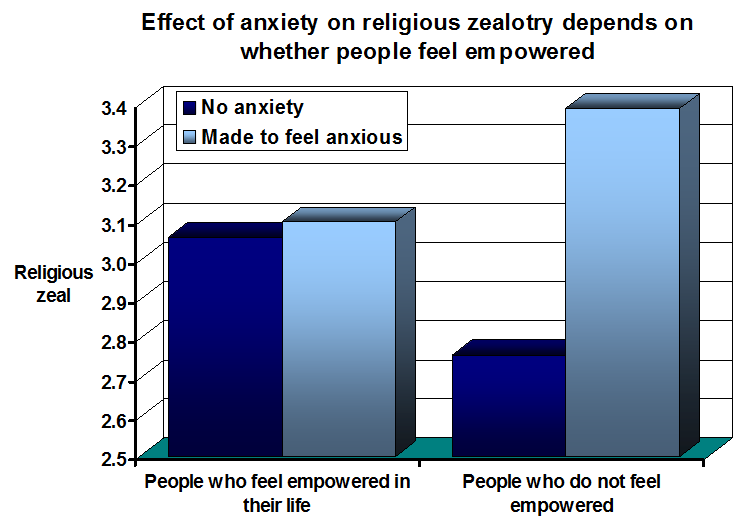 You can see an example of what happened in the figure. In this particular study they asked participants to think of a goal they had in their personal lives, and then to rate how determined they were to achieve it, how in control they felt, and how important it was. The ones who rated highly were considered to be ’empowered’.

In other studies, they also found that people did not become more superstitious in general. What’s more, the effect was strongest in people who thought of uncertainty as nerve racking and, intriguingly, in those spirited individuals who believe in taking action to deal with problems.

They also found hints that this effect is stronger in those who believe in the three monotheisms, rather than Eastern religions (or atheists, of course), and suggest that this might be why religious extremism is more common in the West:

In Western religion, the allure of ideological zeal may be that it can reliably activate the resilience of transcendent approach motivation when temporal goals are frustrated. Unfortunately, religious extremists in the West have a long history of blood on their hands. The same empowering approach motivation that makes one soar may also obscure one’s view of others’ perspectives and facilitate ideological cruelty in the guise of noble cause. Such self-empowered, anger-related, and risk-immune RAM processes, in combination with scripture that advocates aggression toward others, may inflame religious violence in the West.

Now, this research is pretty preliminary. Other research has found that anxiety and uncertainly increases belief in a controlling God – but this study found no such effect. Of course, it’s possible that both effects (handing over control to a powerful God, or displacing the frustrated goal with an achievable, nontangible one) could both occur in different in people with personalities and in different situations. Then too, there is another theory (Terror Management), which claims that people cling to their ‘in-group’ cultural traditions when threatened.

But this research is encouraging because, although we’ve long known intuitively that people turn to religion when they feel stressed and unhappy. The question is how and why. Now, at least, we have three good theories about what is going on here. Only further research is going to tease them apart!

July 7, 2010
What values motivate the non-religious in the UK?
Next Post

July 13, 2010 Xanax redux
Recent Comments
0 | Leave a Comment
Browse Our Archives
get the latest from
Nonreligious
Sign up for our newsletter
POPULAR AT PATHEOS Nonreligious
1