The biochemistry of religious aggression

Anyone who’s taken a passing interest in the news at any time in the past 100 years will have noticed that Israel/Palestine region has had more than its fair share of religious violence. So it’s the ideal place to start looking if you want to investigatge the links between religiously-motivated aggression and the common-or-garden variety.

Jeff Victoroff, of the University of Southern California Keck School of Medicine and colleagues (including Samir Quota of the Gaza Community Mental Health Programme) set out to do just that. They examined fifty-three 14-year-old Muslim Palestinian boys, all of whom were refugees living in the al Shati (“Beach”) refugee camp outside Gaza City in the Palestinian Autonomous Territory of Gaza.

On average, these boys were about as aggressive as any other boys their age. In other words, they were entirely normal in this regard – quite surprising given that 40% of them reported having had a family member wounded or killed by the Israeli Defense Forces. 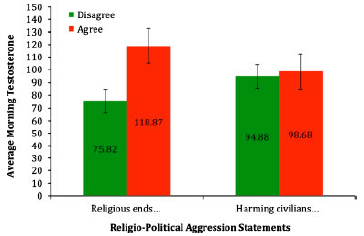 The researchers asked these boys if they agreed with two statements concerning “religiously conditioned political aggression”:

Conversely, there was no link between religious aggression and cortisol levels. Conventionally aggressive boys did, however, have low levels of cortisone.

Even stranger, there was no correlation at all between religious aggression and conventional aggression.

These results can perhaps be understood when you realise that testosterone is not really the ‘aggression’ hormone it’s often portrayed to be. In fact, testosterone seems really to be a ‘success’ or ‘social dominance’ hormone. Winners have high testosterone.

Cortisol, on the other hand, is an anxiety hormone. Animals (including humans) with abnormally low cortisol often become aggressive, perhaps as a result of an inappropriate anxiety response (check out the Do You Mind blog for more on this).

Upon reflection, our second main hypothesis was probably naive from the standpoint of political psychology. From the Palestinian point of view, Gazans suffer unsustainable privations, indignities, and distress owing to an unjust occupation, to which rage is an entirely understandable response. Therefore, far from exhibiting antisocial behavior, a teenaged boy who supports the “any means” standard in the context of resistance to the Israeli occupation might be prosocially supporting his community’s interests.

The data in this study do not permit any definite conclusion regarding the underlying psychological factors linking testosterone and support for religious-political aggression (RPA)—far less provide data pertinent to these larger questions of the psychoneuroendocrinology of asymmetric war. We merely speculate that the observed association between testosterone and support for RPA, in particular the association with the “any means’ item, might be less related to a general aggression factor and more related to dominance seeking, risk taking, and/or reactivity to the provocation of Israeli occupation.

One other finding was that both conventional aggression and religious aggression were linked to a traumatic history and feelings that the Palestinians are treated unjustly. But clearly only some of the boys in the study responded to this by supporting religious violence.

Perhaps, based on these results, it’s those boys who have a testosterone-pumped sense of competitiveness.