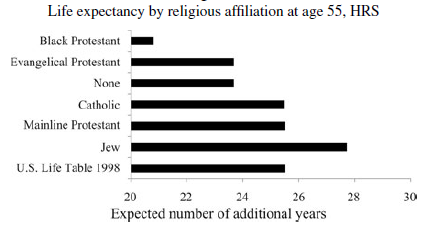 If you’re 55 right now and living in the USA, this graphic shows you how much longer you have left to live!

The data come from the Health and Retirement Study, which was started back in 1992 and has been following a group of 18,000 Americans ever since. Over that time, just over 4,000 have died.

In a new analysis, Allison Sullivan of the Population Studies Center at the
University of Pennsylvania has looked how religiosity in 1992 was linked to early deaths later on. The top-line results are in the graph – Jews lived the longest, and Black Protestants died youngest. The non-religious didn’t do too well – less well than mainline Christians.

In fact, in each year the non-religious were 28% more likely to die than were mainline Protestants.

Digging into why this might be, Sullivan found that one important factor is probably the divorce rate. On average, being divorced or separated raised the risk of death by 60%, and being never married raised it by 45%. The non-religious were around 50% more likely to be either divorced/separated or never married, and when she factored this into the stats, it explain a large chunk of the mortality differential.

Another important factor was religious attendance. In a model that just looked at religious affiliation after controlling for attendance, there was no difference between the non-religious and mainline Protestants.

The importance of attendance is a familiar finding. It seems to be particularly important for women, and seems to work by keeping people happier. Religious belief, and other religious practices, don’t seem to have any effect on health.

In fact, what this study does is further underline the importance of social integration for happiness and health. Divorce is well known to have large and long-lasting effects on happiness. And having a group of people to meet with once a week provides people with a ready-made social group.

Of course, these effects are not all that large. If your objective is to keep healthy, there’s a whole load of other things you can do that will have a much greater effect.

But I think humanists, and others who would like a society without religion, need to ponder these findings. Is there a realistic secular alternative to church going that can provide the social integration once supplied by churches? I think there probably is.

In the UK, the current (albeit unpopular) buzzword is ‘The Big Society’. Nobody quite knows what it means, but in like to think that it means government providing the infrastructure to help people to come together and build a stronger community. I think it’s this sort of vision that humanists need to encourage.

ALLISON R. SULLIVAN (2010). Mortality Differentials and Religion in the United States: Religious Affiliation and Attendance Journal for the Scientific Study of Religion, 49 (4), 740-753