When people say they are ‘spiritual’, what do they mean?

It’s fashionable these days to talk about ‘spirituality’ instead of religiousness. The term is designed to include people who are still basically religious, but who are, perhaps, turned off by traditional religions.

The problem is that if you thought defining ‘religion’ was tough, well it’s a piece of cake compared with defining ‘spirituality!

In the US, where most people say they are both ‘religious’ and ‘spiritual’, it seems that people use the terms to describe different aspects of religion. In essence ‘religious’ means you are a churchgoer, while ‘spiritual’ means that you feel connected to some larger, supernatural belief.

To find out whether similar ideas prevail in Europe, Joantine Berghuijs (a PhD researcher at Utrecht University) and colleagues surveyed 2344 Dutch people – a mix of men and women of all ages. 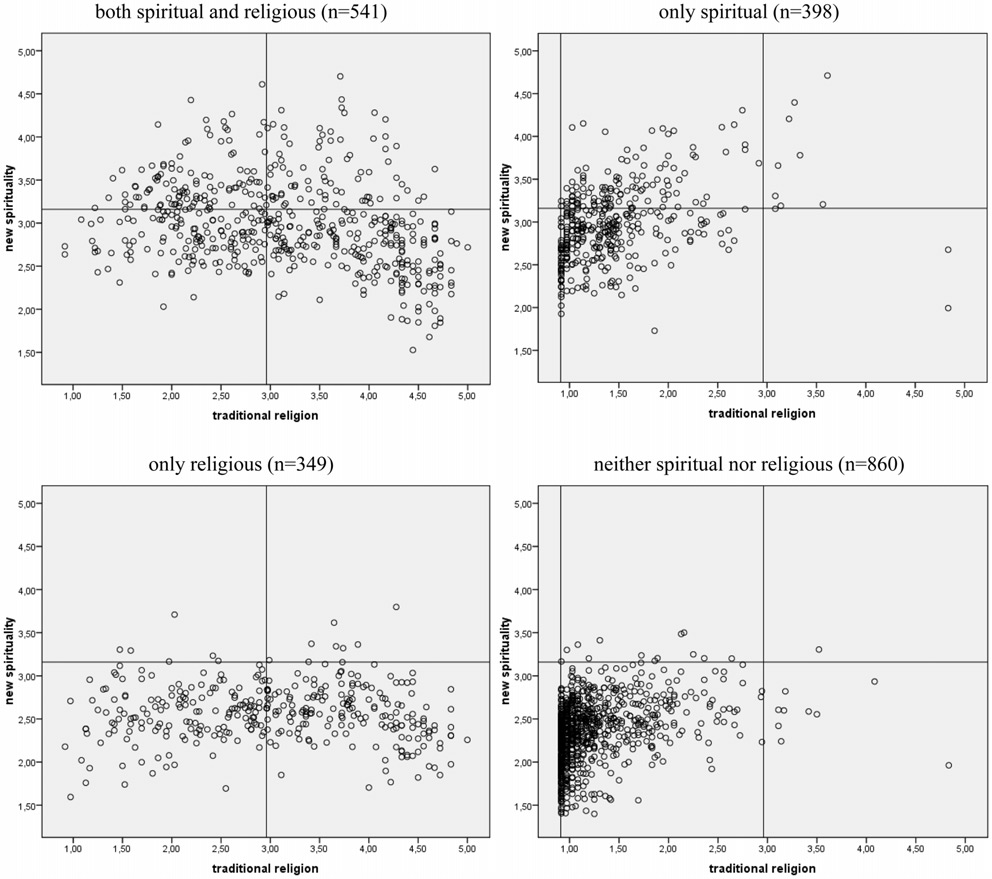 They found that people who said they were spiritual did tend to hold  a bunch of non-traditional beliefs – spiritual transformation, belief in paranormal issues, monism, experiences of non-religious transcendence, paranormal experiences, and karma.

The graphic maps out how people in each of the four groups (religious + spiritual, spiritual only, religious only and neither) scored on ‘religious’ and ‘spiritual’ beliefs.

You can see that the ‘spiritual only’ group scores high on spirituality but low on religion (meaning things like traditional religion, such as affiliation, attendance and prayer). That’s as you would expect.

On digging further, they found that the ‘both spiritual and religious’ group could actually be split into two: one group that combined “a strong orientation toward traditional religion with new spirituality and one that is mainly oriented toward new spirituality”.

What they suggest is that, in the Netherlands at least, people who say they are spiritual are probably at a half-way point between the religious and non-religious. Calling yourself religious (and not spiritual) probably reflects a ‘life orientation’ rather than any particularly strong beliefs.

Whereas people who are both spiritual and religious are highly religious – they probably represent the ‘new religious’ movements. Some are revival movements within established churches, while others are opposed to traditional religions.

Either way, it seems that what people mean when they say they are spiritual probably depends on whether or not they also think they are religious!

February 10, 2013
What kind of person sees ghosts?
Next Post