As race day approaches, Oxford rowers increasingly turn to their faith in science 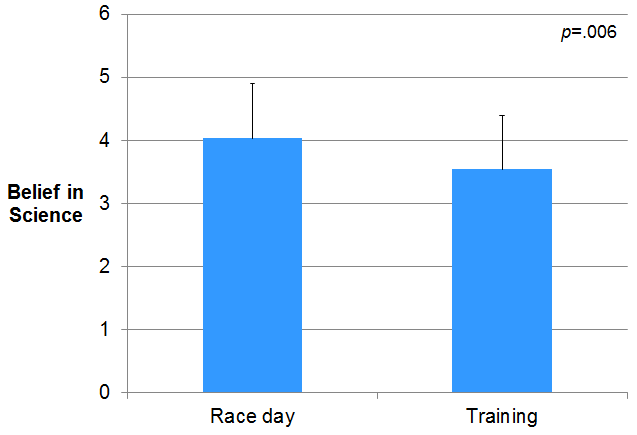 Regular readers will be familiar with the idea that people put into stressful situations often respond by ramping up their superstitious or religious beliefs. Now Miguel Farias, at Oxford University, and colleagues have shown that you can find a similar effect with belief in science.

Their first study was simple. They recruited 100 rowers (presumably from the Oxford University Rowing Clubs) – half of them on the actual day of an important race, and the other half just at a regular training session.

They measured belief in science using a battery of 10 questions, including things like “We can only rationally believe in what is scientifically provable”, “The scientific method is the only reliable path to knowledge”, and “In a demon-haunted world, science is a candle in the dark. (Carl Sagan)”.

The rowers tested on race day were significantly more likely to agree with such statements (albeit the effect was only small).

That’s a fairly simple test. So then Farias and colleagues did a more sophisticated study.

This time, they recruited 60 students and asked half of them to write down thoughts and feelings aroused by thinking of their own death (the ‘mortality salience’ condition’). The other half wrote about the experience of dental pain.

Mortality salience is a well-studied phenomenon. Other studies have shown that reminding people about death makes them more religious and more patriotic. In short, mortality salience makes people cling harder onto familiar bedrock of their culture.

Notably, these rowers and students were a pretty non-religious bunch. So, for them, science may represent a comforting worldview that gives them security and reassurance. As a result, when they feel threatened or anxious, they turn to science rather than religion (notably, there was no effect of mortality salience on religious beliefs in this study).

And that fits with previous research, which found that mortality salience can actually make the non-religious more hostile to religion!