Cloud of dots or person walking in a snowstorm? Paranormal believers see people when they’re not there.

Imagine yourself walking on your own through a dark forest. Each and every movement that you perceive will result in the feeling that another person or animal is present. From an evolutionary point of view, incorrectly assuming the presence of another agent while there is none (i.e. a false positive) is associated with only little costs, whereas the false belief that no other agent is present while in fact there is one (i.e. a false negative) can cost one’s life.

I’ve lifted that from the introduction to a new paper by Michiel van Elk (University of Amsterdam), because it rather beautifully describes a phenomenon that is often cited as contributing to religious belief. 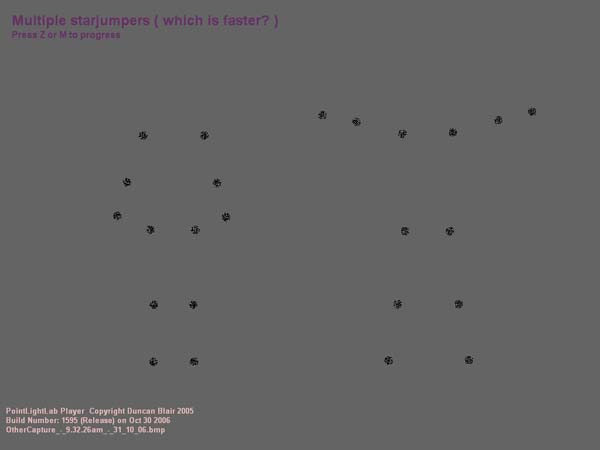 Now, previous studies have already shown that believers in the paranormal are also more likely to see patterns, such as faces, in a jumble of stuff. But they haven’t looked at moving objects – i.e. things that are ‘agents’, actively doing stuff. So previous studies don’t directly support the theory.

what van Elk did was to show a group of subjects (a mix of local students or people visting a paranormal fair some moving point images of a person. You can see the kind of thing they saw in the graphic – although what they actually were shown was animated dots representing a person walking on a treadmill.

The walker could appear at different places on the screen, and was sometimes obscured by clouds of random dots. Sometimes there were random dots and no noise. 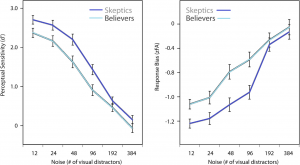 He found that perceptual sensitivity – the difference between ‘hit’ rates (when the viewer accurately spotted a real figure) and false alarm rates (when the viewer saw a figure that wasn’t there) went down as background noise levels increased (that’s what shown in the left-hand graphic). But overall, it was higher among the skeptics than among paranormal believers.

Skeptics also had lower response bias (shown in the graphic on the right) – that’s the tendency to say there is  figure there when there is none (taking into account the average hit-and-miss guesswork of the group as a whole).

What was most interesting was that the difference in response bias between the paranormal believers and the skeptics was highest when background noise levels were in the mid-range.

van Elk has this to say about that finding:

That fits in with other research that shows that paranormal believers tend have their ‘signal gain’ turned up to high. They strain to find evidence of agents at work – but only in circumstances where that could plausibly be the case.

Given that non-believers in the paranormal also tend to turn up their signal detection when they are distressed or anxious, this could help to explain the link between religious belief and tough environments.

November 19, 2013
Faith in god and faith in doctors
Next Post

December 18, 2013 If your god didn't care about right and wrong, would you still be good?
Recent Comments
0 | Leave a Comment
Browse Our Archives
Follow Us!