Is the internet leading people away from religion?

May 6, 2014 by Epiphenom
0 Comments
Is the internet leading people away from religion? May 6, 2014 Epiphenom

This is a story that has been circulating recently, so I thought I’d  fact check it! The study, by Allen Downey, a Professor of Computer Science at  Olin College of Engineering in the USA, hasn’t yet been formally published – but you can read a copy of it here. 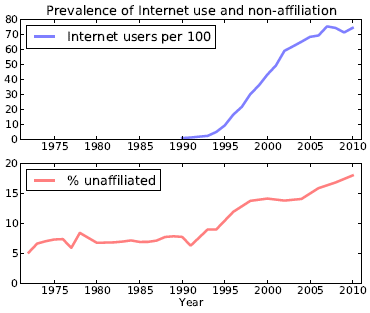 The spark for this study was data on US internet users from the World Bank and the religious disaffiliation from the US General Social Survey (GSS) – sown in the figure on the right. There’s a vague correlation, as you can see.

So Downey looked at religious preference data from 8951 participants in the GSS from 2000-2010. If the respondent said they had a religious preference, then they were counted as being religious – that’s a pretty low bar. The GSS also asked how many hours per week people spent on the internet.

Running a fairly straightforward linear regression model, he found that being born into a religion was the strongest predictor of whether or not you were religious. Richer people also were more religious. Younger people, and more educated people, were less religious.

But, after taking these factors into account, internet use still seemed to play a role.

It’s a meaningful role, but small. For example, using the internet for 2 hours a week was about as important as an extra year of education, or being one year younger.

By plugging in some hypothetical numbers, Downey reckons that internet use accounts for 20% of the change in religion, while increasing education accounts for 5%. Generational change accoutns for the rest.

Frankly, I think this last calculation is pretty suspect. He includes ‘generational change’ as a factor of the same kind as internet use – and it’s the biggest factor. But really this is just saying that younger people are different from older ones. So it seems a bit recursive.

There are other issues with using regression to try to tease out the relative effects of these different factors – mainly something called collinearity. For example, younger people are less religious, and use the internet more, and are better educated. Which one ends up correlating better could be down to the quality of measurement, rather than anything more profound.

Also, it could be that internet use is not a causal factor here. It may be that people who use the internet a lot are not inclined to go to Church (they are not dutiful or community minded). But then if there was no internet they would still not be going to Church – they’d find some other thing to do with their time.

Even so,this study does, support one counter-intuitive idea. That’s the idea that education decreases religion not by teaching specific facts.

That’s what was found in a study back in 2010. It found that the students who underwent the most dramatic decline in religious belief as a result of college were those who studied Humanities and the Social Science.

If that’s true, then the critical factor undermining faith is the opening of minds to alternative world views. Something that the internet does par excellence.

April 29, 2014
Do religious people think they’re nice? It depends on the country
Next Post