Women can keep the vote!

About this time last year I wrote about an interesting study that found that single women were less religious when they were most fertile, while women in a relationship were more religious.
Christine Harris (University of California, USA) and Laura Mickes (University of London, UK) also thought the results were pretty remarkable – and they set out to see if they could reproduce them.

So, repeated the study by Durante and colleagues, but with with a larger pool of responders. Like Durante, they recruited them using Amazon’s Mechanical Turk – 1,200 women, interviewed before the 2012 US presidential election. 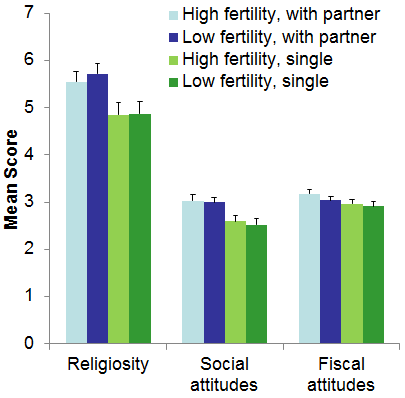 The results, shown in the figure, were clear: stage in the ovulatory cycle had no effect on religiosity or on social attitudes (or on fiscal attitudes, which was included as a kind of control).

So women, at least the ones interviewed for this study, do not turn to religion and social conservatism when they are at their most fertile. Social attitudes do not change on a whim.

The results did confirm that women in established relationships tend to be more religious and more socially conservative, which is pretty much would you’d expect from other data (but: is it cause or effect?).

So, two studies, with basically the same design, with different results. Should we be concerned?

Well, Harris and Mickes point out that this study is just one of “a growing number of failures to
replicate several menstrual cycle effects on preferences and attraction, which invites concerns that this literature as a whole may have a false-positive rate well above the widely presumed 5%.”

They suggest that the problem may be due to “data analysis flexibility”. Researchers often play around with the data, refining their analyses until they get something that clearly demonstrates the effect they’re looking for.

It’s a common temptation, but it renders any statistical analyses meaningless. The only way around this problem is to declare in advance exactly what you will do, and then follow that plan to the letter.

But this approach, while rigorous, means that you can’t go digging in the data to try to unearth useful stuff. The solution is to do an exploratory analysis, and then run another full study to confirm what you’ve found. But who has the time and money to do that (especially when academics are under immense pressure to pump out new study results, in order to keep their job).

Talking of which, Harris and Mickes did make one interesting finding. High-fertility women in established relationships were much less likely to say they intended voting for Obama than low fertility women or high fertility single women (around 58% of the high-fertile, paired women, versus around 77% of the other groups).

But when it came to actual voting (they ran the study again after the election), paired women voted for Obama at equal rates (about 68%), while single women were more likely to vote for Obama if they were highly fertile (90%) than if they were at a low-fertility stage of their cycle (75%)

Perhaps this has nothing to do with attitudes, though, and everything to do with whether they found Obama attractive (physical attractiveness is well known to influence the voting behaviour of both men and women).

Well, maybe. I guess someone will have to run another study to see if that’s true!

May 6, 2014
Is the internet leading people away from religion?
Next Post