What kind of countries go to war?

Since 1963, the Correlates of War project has been systematically accumulating and documenting data on international warfare. Today, it provides a massive database on who fought, when, and all kinds other facts and statistics for every conflict since the Napoleonic era.

Just recently, a paper popped up on Archiv that uses some sophisticated data analysis to delve into the political, economical, and religious factors that are connected with emergence of conflicts and wars between countries.

The author, Igor Mackarov, finds that there are no clear changes in diplomatic status (other than a general downturn) that indicate a potential war on the way.

Nor is there a clear relationship with economic activity. It does seem, however, that wars often occur when economic balance (i.e. the relative economic strength of two countries) changes rapidly. 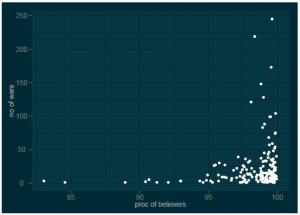 So what about religion? Well, as you can see in the graphic taken from the paper, there’s a clear relationship.

The more believers there are in a country, the more wars that country will have been involved in.

Now, there are a few things to consider here. First is that European countries tend to be the least religious, but the available data for religion only stretch back to 1945.

So it completely excludes that minor hiccup on humanity’s general upward path towards peace and stability known as the Second World War. Of course, European countries in WWII were quite religious by today’s standards, but even then they were relatively secular.

And this analysis doesn’t control for other factors. Maybe poorer countries go to war more often. And maybe populations rocked by conflict turn to religion.

But this period does include the entire cold war — a period when many believed that the greatest threat to world peace was godless communism. Well these statistics don’t seem to bear that one out.

Another of Mackarov’s interesting findings is that there is no relationship between the number of Muslims in a country and the number of wars. That’s despite the fact that 6 large Islamic countries (Iran, Iraq, Turkey, Syria, Egypt, and Pakistan) have been involved in a very large number of conflicts (around 100 each).

August 19, 2015
America is finally losing its religion - and that's a good thing!
Next Post