Whether religious people are more healthy depends upon the social context 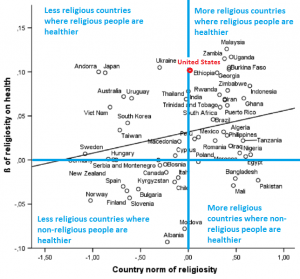 One of the accepted truisms of religious research is that religious people tend to be healthier than the non-religious. Over the years I’ve seen many studies looking into this but haven’t blogged about any since 2012 because, well, they’re all a bit boring.

One of the problems is that almost all the research is done in the USA, which is an interesting country but not exactly representative of the rest of the world. And that’s an issue because we know that the health benefit of religion seems to be intimately tied to the social aspects (i.e. churchgoing). Different societies might work differently.

And that’s exactly what new research by Olga Stavrova (University of Cologne, Germany) has revealed. Stavrova is an expert in how differences in societal religious norms can affect the personal benefit (or otherwise) of religion – if you’re interested in some of her other work, see Do religious people think they’re nice? and Bucking the social norm leads to social rejection and unhappiness.

Stavrova used data from the World Values Survey conducted over a couple of waves in 2001-2006. It asked questions about how religious people were (Stavrova combined questions about attendance and belief), and also asked people to report how healthy they felt.

She found was that whether religious people were healthier did indeed depend on the average levels of religion in a country.

I picked out the USA in red, so you can see what an anomaly it is. The USA is about average in societal religion, at least in global terms. But being a religious person in the USA is strongly linked to good health.

Based on prior research on social norms and conformity in social psychology, individuals who are in tune with their cultural norms and the people around them might be perceived as more likeable and attractive. They might have an easier time forming friendships, extending their social networks and obtaining support when needed compared to their more deviant counterparts. Social support, in turn, is considered a powerful factor that promotes health outcomes,such as through its stress-buffering effect.

A really interesting question would be to look at those countries where the relationship between personal religion and health is most negative – as diverse as Norway, Bulgaria, and Pakistan – and try to unpick what might be happening there.

December 10, 2015
Trust is more important than religion in encouraging charitable acts
Next Post