The war on atheism – bucking the social norm leads to social rejection and unhappiness September 4, 2012 Epiphenom 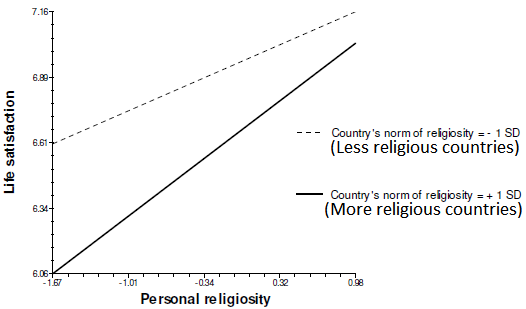 Take any given country, and religious people tend to be happier and more satisfied with their lives than the non-religious. Quite why this is so is a matter of debate, but there’s increasing evidence that part of the explanation is that happiness stems from believing yourself to be ‘normal’ – that you fit in with your community.

Olga Stavrova, at the University of Cologne in Germany, is an expert on how social norms affect individual happiness. For example, she’s recently shown that unmarried couples are less happy than married couples only in those countries where cohabitation is disapproved of (thus showing that there isn’t anything intrinsic to marriage that leads to happiness).

Now, along with colleagues, she’s taken a look at how attitudes to the non-religious affect their happiness and life satisfaction (these are two closely related measures – but happiness tends to reflect how you feel right now, whereas life satisfaction reflects longer-term feelings).

You can see the results in the first graphic. In countries where there is a strong religious social norm (solid line), there’s a strong relationship between and individual’s religious belief and their life satisfaction.

But is this because of active prejudice – or is there something else going on? To answer this, Stavrova turned to the European Social Survey.

However, that varied a lot by country. In the graphic, you can see how religion relates to happiness in each country (ranging from the least religious countries on the left, to the most religious on the right), split out into three factors. 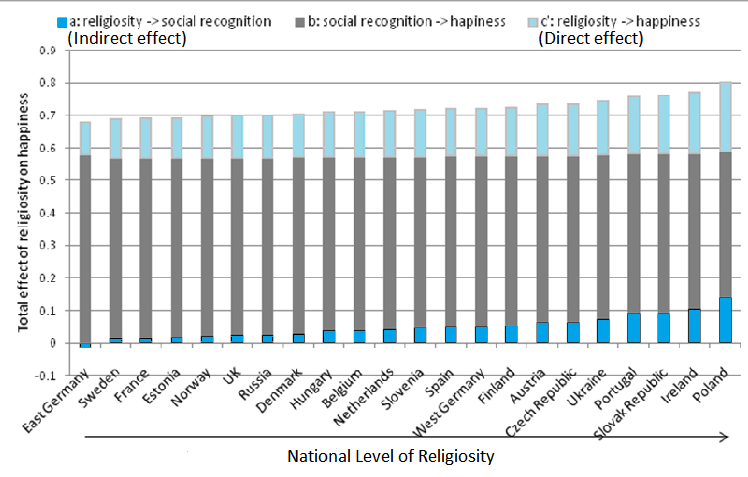 The top portion of the bar (light blue) shows the direct effect – in every country, religious people tend to be intrinsically happier, although this effect is larger in the more religious countries.

The bottom portion of the bar (dark blue) shows the indirect effect. Again, in almost every country, being religious leads to more social recognition, in turn leading to more happiness. This effect is much stronger in the more religious countries.

The one exception is the least religious country, East Germany. Here, being religious actually leads to social disapproval – it’s the one country where you could argue that there is a ‘war on religion’!

These new data fit in nicely with those findings, and also suggest that the non-religious suffer ill effects from social exclusion in religious countries.

And the stress of that might explain why the brains of the non-religious seem to age and atrophy quicker!

August 29, 2012
Catholics and Muslims want democracy - but for different reasons
Next Post

September 7, 2012 Why is there something rather than nothing?
Recent Comments
0 | Leave a Comment
Browse Our Archives
get the latest from
Nonreligious
Sign up for our newsletter
POPULAR AT PATHEOS Nonreligious
1