There are three signs posted up in the gay bar we see in Paul Bogart’s 1988 adaptation of Torch Song Trilogy, over the doorway into the back room where you can go for anonymous sex. They say (this is from memory not notes, so the first one may be slightly wrong)

These perfect signs are the markers of a certain kind of place and time, which can evoke nostalgia once it’s safely past, especially if you only experienced it in your childhood and early youth. I’ve just started a book, Dorothy West’s novel The Living Is Easy, in which the central character is a black Carolinian schemer (schemestress?) transplanted to Boston, who yearns for her sisters and “the spellbinding South.” The South of her enthralled mismemory is “amoral,” sultry, as narcotic as Lampedusa’s Sicily–though even more violent and unjust. The amorality transforms, in memory, to ecstasy, to an escape from the moral world into the sublime: close to the knives.

It’s easier to love it when it’s gone. And yet, you know, I watched these three movies just now, set in the bad old days, and I couldn’t help thinking–Say what you will about skyrocketing homicide rates; at least they’re not skyrocketing suicide rates. So let’s travel back, first to 1977…

Summer of Sam: Spike Lee’s 1999 tragicomic take on the Son of Sam killings. It’s set in that Spike Lee world of the eternal long hot summer, and it’s basically two-plus hours of bad ’70s people making bad ’70s decisions. I appreciated it for its indefensible sympathy for these losers, who scramble around the edges of a serial-killer investigation having affairs, doing drugs, beating up people for usually racist reasons, and generally leading pointless lives. We’re in that tilting time period when people still got married, but acted as unmarried as possible under the circumstances.

I’ve just watched three somewhat parallel movies, all two hours plus and all about crime investigations in the 1970s. Of these I enjoyed Summer of Sam the most, just because it was such an unexpected, marginal tale. Zodiac is a mix of newspaper hero tale and “the ’70s destroy everybody who touches them” tale, it’s investigation-heavy and a little too slick. All the President’s Men is of course the ultimate newspaper-heroism flick. The first time I watched it I was willing to put up with the hagiography because of the chemistry between Dustin Hoffman (lovely young Dustin Hoffman!) and Robert Redford; this time around I was less patient, more aware of its weird pacing (EVERYTHING HAPPENS and then for a while nothing happens, rinse repeat), and more intrigued by all the people we barely get to see, Sloan and jittery coffee-toothed Serretti and the invisible Liddy and Colson, who of course went on to quite memorable careers in entertainment and Christian service respectively.

Torch Song Trilogy: This adaptation of a play by & starring Harvey Fierstein (a man whose name must ever be writ italic) opens with an absolute aria of camp heartbreak, Arnie Beckoff (Fierstein) creating his drag persona Virginia Hamm and rasping his way through an epic of self-exposure as self-defense. The rest of the movie is a rambling voyage, as men somewhat inexplicably pursue the skittish Beckoff, who tries to push them away by pulling them too close. He’s a delight and a bit of a test-your-strength machine, and even manages to prompt one man to come out of the closet just to ring his bell. The middle section is, to me, the weakest, a bisexual infidelity drama which seems unmatched to the hard-bitten lovelorn first section and the tragic, redemptive final section about building a queer family in the teeth of the world.

Toward the end Beckoff is yelling at his mother, demanding respect not only for the love and care and loss he experienced with a man but also respect for emotions which seem outsized to others. It’s a melodramatic, hectoring speech, and it felt entirely earned to me. Real people ascend to melodrama and descend to harangue in exactly these circumstances; more importantly, the film knows that melodrama and harangue don’t deserve respect and yet they compel it here, because they flow from so much heartache and long-denied truth. Anyway, when I saw this on stage I thought the two women characters were tinged with misogynistic caricature, but they worked a lot better on film, unsure why. Maybe Anne Bancroft as Arnold’s mother just gives more conviction to her confused, awful reactions, her attempts to stretch herself just far enough to accommodate her son but not quite far enough to shelter him.

The final credit dedicates the film–I’m paraphrasing since this is again from memory; the actual dedication is starkly eloquent–to all those involved in the fight against AIDS. In this movie all you find when you go through that black doorway into PARADISE is awkward groping. Torch is about leaving that dream of lightless, mindless ecstasy behind and settling down, if you survive, to bourgeois sodomy.

Friday: An ambling 1995 comedy starring the delightful Ice Cube, with his perpetually-furrowed brow, as a just-fired regular guy just trying to survive in a world of stoners and drive-bys, break-ins and beatdowns, cartoon bad girls and kinda boring good girls. The camera does showy, unnecessary swoopy things. The dialogue is all hilarious in this low-effort, goofy fond-satire way: foul-mouthed Jehovah’s Witness door-knocking ladies, misremembered proverbs (it is not, in fact, “The older the berry, the sweeter the juice”). Crapping jokes and cussing jokes and look at that lady in her skimpy clothes jokes. I enjoyed this badly, stupidly, as it was meant to be enjoyed.

It made me think about the world of Killer of Sheep, which was threaded with intimations and threats of violence: small violences like the rock-throwing children’s games. In Friday the violence is bigger and pervades the air like a garbage strike. Killer‘s comedy is hard-bitten and unhappy-ending; it’s kitchen-sink not only in its realism but in its miserable comedy (the car engine) and when it takes flight, it enters realms of kitchen-sink sublimity (“This Bitter Earth”). Friday has no such ambitions. No sublimity, no realism; a happy ending, justice, finally on the giving side of all those punches and kicks.

Like Torch Song Trilogy this is a movie which argues, in its final sequence, for a specific morality. Torch‘s morality was new and has in some parts of our world succeeded. (Never as many parts of our world as you think.) Friday‘s morality is old and has not succeeded. It’s the old man, Craig’s father, telling Craig that a man doesn’t need a gun because a man uses his fists. It’s wrong even to call this morality when it’s really a code of honor: aesthetic not rational, unconcerned with outcome measures; as eloquent as smoking, and as healthy.

That’s the news from the great drowned world, where Heaven and Hell were two sides of a sweltering summer night.

Picture of a handgun via Wikimedia Commons. 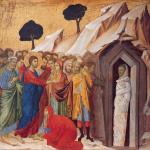