Back in the last years of what they call “my drinking career” there were a few movies I returned to obsessively. There was Withnail & I, whose appeal to the late-stage alcoholic is obvious. (We demand a Disney princess with d.t.s!) But there were also two other movies where I didn’t quite understand why I was so drawn to them. I didn’t own Shattered Glass or watch it a million times, but I did watch it at least twice in a row and then listen to the dvd commentary instead of doing literally anything else with my life, and I’ve wondered for a long time why I did that. Last week I rewatched it and it now seems pretty obvious: It’s a movie about getting caught, and also about caring about other people in a way that’s 100% not humility at all. It’s about what David Carr called “handing out different versions of myself.” Very relatable!!

But I also watched The Descent, a million times and never sober. I watched that movie so much that I thought of it as one of my “comfort watches,” like Arachnophobia or Grosse Pointe Blank. Last night I watched it sober for the very first time, wondering if I’d still love it, and also wondering if I’d figure out something about why it was so compelling back in the bad old days. I did still love it and I do think I might have grasped something about why I loved it so much then.

WHAT FOLLOWS INCLUDES MASSIVE SPOILERS FOR BOTH ENDINGS OF THE DESCENT SO IF YOU DON’T WANT THAT STOP HERE.

The Descent is a phenomenal movie anyway, its women so brave, so dedicated to one another, so mistrusting or untrustworthy; its caves alternate between terrifying and beautiful, a skull-choked labyrinth cathedral. You might think that I loved it because of Juno, who plunged down into those depths seeking redemption and instead found a terrible justice, and I do love her and her storyline. Moreso I loved, I think, the caves as Sarah’s skull, her claustrophobic inescapable psyche. (Rewatching it this time I noticed how wet the caves are–how full of wine-dark liquid and foul slime, very very similar to my nightmares in late drinking/early sobriety. I never promised you a subtlety garden….) And so this rewatch helped me to understand something I’d wondered about for a while–why I didn’t feel about the two possible endings the way other horror fans did.

I actually couldn’t remember which ending my dvd has–you may imagine, by the time we reached the end I wouldn’t be remembering much of anything, back in the day. As it happens it has the full British ending, the original one, where we see Sarah escape the caves, claw her way up from the earth, sob in the pickup–and then wake up back underground, to die with her hallucinated daughter. For a long time I’d argue that this ending was not the grimmest one. I was never able to articulate this clearly, but basically, in the American ending, where the escape is real, Sarah has not just lost everything but actually transformed down there in the dark. She has become someone who can murder in cold blood. She has lost something of her soul. The crawl up from that, it seemed to me, would be more harrowing and more impossible than her scramble up the underground tunnel of bones.

But I was wrong. Trapped in my own gleaming liquid labyrinth, I wasn’t able to see that a harrowing crawl back to life and hope was still possible for Sarah as long as she was alive–that it was possible and real, and worth fighting for; that light is better than lightlessness even if the light exposes what you’ve become. Watching the British ending now, in Sarah’s sweet happy smile at the end I saw a hint of my own thanatostalgia. I saw a hallucination you can cling to, which won’t demand all that hope demands of you, which will let you return to the lost past instead of going forward into the totally unknown and unwanted future. As damaged as Sarah is, as much of herself as she’s left down there in the caverns during her sojourn in Hell, it is heartbreaking to watch her lose her chance to stumble forward angry and heartbroken and alive.

There’s a bit in The Faerie Queene:

What I felt watching Sarah’s cave hallucination was very close to that, to the longing for that. That’s why I believed it was the gentler ending.

If you’ve read the book you’ll remember that those words are spoken by Despair.

Ven. Matt Talbot, St. Mark Ji Tianxing, pray for us and for all those souls still lost in the underground mazes of addiction. 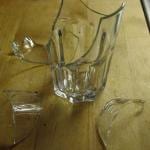