The Sojourn, it is about process, not a goal

Rather than be spooked the next time you drive by or walk and whistle past a cemetery, think about all the individuals in it 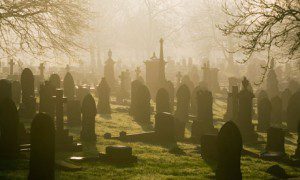 who are rarely, if ever, visited.  Most have been forgotten.

Look at the experience of walking or driving by a cemetery from a Sophiological perspective.  Think about their power, influence and significance when they were alive.

No doubt there are buried lawyers, doctors, professors, successful entrepreneurs, and maybe a real estate mogul or two.  However you think about success – socially, financially or professionally – remember death is the great equalizer and these significant lifetime achievements don’t matter in the afterlife.

If you’re not inclined to believe in a spiritual realm or higher power, then you’ll be fertilizer, assuming you go for a natural burial and don’t get boxed up, forever encased.  Regardless of how your remains are processed you will not reflect on anything whether you failed, succeeded, or were a good person.

If you’re one who believes in another world beyond this life, then it still doesn’t matter if you were a US Senator, Congressman, or a Pulitzer Prize winning author.

Name the US Senator from your state during World War II.  Do you know who all those important people are in the credits that make programs possible on PBS?  Did you ever wonder about a street name and for whom it honors?  Do you care?  Do you know who received a humanitarian of the year award last year in your community?

I get rather impatient, like many people, when I’m required to sit in meetings where talking about goals becomes the focus rather than actually getting to the end result.  Process trumps goals and the organization ends up spinning its wheels.

Nothing gets done.  In some of these meetings, you want to shout, “Let’s top talking about doing it and just do it!  It’s not rocket science! Let’s just get the job done”!

In contrast, as a process for life or perhaps better described as a personal sojourn, relates to each of us, I’ve concluded as have others, that the journey requires focus on the here and now, not the future.   Yesterday, to modify a cliché, is gone forever, tomorrow is a hope with no guarantee, and today at this very moment as you read this, not the next hour, is the only reality.

The process becomes about the quality of living as it pertains to interactions with others – the kindness, empathy and compassion shown.  The here and now, even though we should plan for tomorrow, has to be life’s focus.  It all comes together in the process more than we realize.

No one starts living after some lofty academic or professional achievement.  It is now.  Not surprisingly, there are a lot of unhappy or unsatisfied very successful professionals and entrepreneurs out there.  They endure spiritual poverty and don’t even realize it.

Even for those who accept material gain isn’t the goal, they also must realize making a difference in a cold, mean, troubled world won’t put an end to life’s injustices.  Hunger, poverty, economic inequity, domestic violence, or animal abuse are among the social challenges that plague humanity as much today as they did a century ago or longer.

Leo Tolstoy wrote in one of his short stories, “You say you would do twice, ten times, a hundred times, more than you did.  But if you did ten thousand times ten thousand more than all men have done, what would that have been in the work of God?  A mere nothing!  God’s work, like Himself, is infinite.  God’s work is you.  Come to Him, and be not a laborer but a son, and you will become a partner of the infinite God and of His world … your work will be neither small nor great, it will be God’s work.”

Sometimes we may overthink our place in the world.  It can be self-absorbing without much progress, not unlike the Hamster in the wheel racing to a destination and getting nowhere, though the furry creature has the benefit of losing weight with much needed exercise.

In the end, it is important to plan for tomorrow as best we can, hoping to enjoy it, but in the final analysis understanding that it’s in this moment that matters such as whether we made someone smile who is having a bad day.  Perhaps it’s the best form of energy to feed the cosmos that in turn keeps hope alive.

In doing so, we are to our Creation as the Creator intended.  We are an extension of something bigger and better, something transcendental, helping to bring out our better angels.

Now that you have finished this article, what will you do that’s joyful and meaningful for yourself or someone else in the next hour?  More important, how can you condition yourself to do it each day without think about it?

Paul Jesep is an ethicist, attorney, corporate chaplain, and founder of CorporateChaplaincy.biz, a firm committed to the spiritual wellness of professionals.  He also is author of “Lost Sense of Self & the Ethics Crisis: Learn to Live and Work Ethically”.