What Would You Say to Pope Francis? 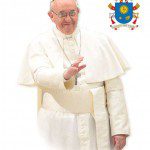 The head of a healthcare organization where I do ethics and compliance work asked me shortly after a meeting, “What would you say to the Pope, if given the opportunity?”

The CEO and a few members of his family will attend Mass celebrated by the Holy Father at Madison Square Garden in New York City. There’s a slight chance he could meet briefly with His Holiness backstage.

Regardless of your faith tradition, what do you ask a world-recognized spiritual leader?

“Hi, how’s it going? Welcome to New York!” Or maybe give him a slight tap with a closed fist on his arm and tell him with a wink, “You’re doing a great job.”

If I met Pope Francis, I could ask him in a few seconds about lessening the power of church hierarchy, ordaining women as clergy, and why official Catholic teaching should re-visit same-gender marriage. Yet it would be inappropriate.

I finally said to the CEO, “Experience the moment, look into his eyes, hold his hand with both of yours, and silently bless him.”

The CEO is a self-respecting Italian Catholic. He said with a joyful, hearty, sincere laugh, “If I blessed the Pope, my family would think I was conceited.”

On first blush, he’s absolutely right. Bless the Pope? “Who am I to bless the Pope?” he added with the utmost humility.

On second thought, why not bless the Pope? After he had been selected, Francis addressed the faithful from a Vatican balcony and specifically asked for prayers and blessings.

In addition, like everyone else spiritual leaders need spiritual support. Millions of people want something from Pope Francis. Many have unreasonable expectations that this man (and he is a man) has the ability to bring an end to their personal troubles or end war and poverty.

Over one billion Christians seek his spiritual care. Hundreds of millions with no faith, different faith, embracing another Christian denomination, or who may be spiritually searching, respect and admire him. Think of the constant pressure he’s under.

And let’s not forget Vatican politics – it may not be as cloak and dagger as in the days of the Borgias, but make no mistake church politics are as stressful, if not more so, as the public expectation to be a beacon of hope in a cold, unjust, complicated, and nonsensical world.

Each of us, no matter who we are, has the power to call on a holy, divine authority to bless another human being. It’s just a hunch, but Pope Francis if he had to choose, would take a blessing from a homeless person before a cardinal who lives like a prince and gives lip service to the poor.

I think Francis would welcome a blessing from someone living on the streets, before getting one from a man who claims to speak for God and is bejeweled in fancy dress. Again, it’s a hunch.

To anyone who attends Mass, waits on the street for the papal motorcade to pass, or has the opportunity to momentarily look directly into the eyes of Pope Francis, consider offering a silent blessing to this gentle soul, this humble man, this child of the same Creator.

“Francis, my brother (in Christ) may the Giver of Life bless you, sustain you, and keep you now and always. Amen.”

But why stop at Pope Francis? The next time you’re driving down the street and see someone who looks sad or is pushing a shopping cart filled with empty tin cans offer them a silent blessing as well.
Paul P. Jesep is a Christian Sophiologist believing Holy Sophia (Divine Wisdom) is the Holy Spirit. He is an attorney, corporate chaplain, and Eastern Orthodox priest.

Against The Bloviating Justifiers Of Eucharistic...
Clint Schnekloth
Related posts from Faith With Wisdom