In November, the Pew Research Center released its findings of 35,000 surveyed Americans. It found a slight drop in religious affiliation and belief in a higher power. The decline in daily prayer, church going, and belief in a divine creator “declined modestly in recent years”, according to the report. 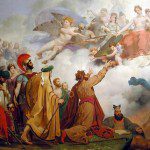 The 266 page study noted Millennials are the driving factor who “do not belong to any organized faith”. Overall, Americans unaffiliated with a religion rose to 23%, an increase of seven points in eight years. The “majority of Americans without a religious affiliation,” according to the survey, “believe in God.”

In general, “there has been no discernible drop in most measures of religious commitment”. Eighty-nine percent of Americans believe in a higher power, a modest decline of three points from a study conducted in 2007.

In interpreting the findings and looking at the overall religious landscape going well beyond the study, persons who still identify with a religion or particular denomination, however, are defining their affiliation more broadly.

If religious leaders fail to be responsive, for example, they’re increasingly ignored. Divorce and use of contraception among American Catholics, for example, reflects disconnect with the realities of life and rules and dogma imposed on the faithful by celibate, unmarried clergy.

In addition, it’s fair to conclude religion will always have value because of its ritual and ceremony. They add beauty, structure, and continuity to an individual’s experiences at key moments in life like marriage, baptisms, funerals, or in regular worship to connect with something bigger than themselves. Ritual and ceremony can enhance the spiritual experiences of those who sojourn beyond the mundane of everyday life.

Although an increasingly number of people are willing to challenge religious hierarchy, accept scientific findings like evolution, hold denominational leaders accountable for greed and deception, and no longer believe religious leaders have a special hotline to God, they still want some form of spiritual grounding.

Religious and sociological shifts are causing places of worship to close. Increasingly, religious leaders are viewed as obstacles to an individual’s spiritual empowerment, rather than facilitators. Religious power and hierarchy are perceived as the problem, not the solution. Increasingly, the curtain is being pulled back in the emerald city to see church wizards are mere men or women.

Men and women in religious fancy dress or speaking with the authority of God aren’t meant to control and be the go-between at any stage of personal growth and enlightenment, but rather a guide who assists and suggests. And if they seek to control rather than help, they need to get out of the way since they do more harm than good.

Spirituality is similar to food and water for physical nourishment. Humans will always need them, but how food is prepared or processed is changing to enhance the quality of life. Americans are now empowered with information about the dangers of poor diet and little exercise. They are sensitive to pesticides, the benefits of organically grown food, and how low carb-high protein diets can benefit.

Similarly, individuals always will have a spiritual hunger needing sustenance, though how this need is satisfied is changing dramatically. Ultimately, it’s up to the individual to determine how the need for inner nourishment is met at this social and religious crossroads.

Paul Jesep is an attorney, corporate chaplain, and author of Lost Sense of Self & the Ethics Crisis.

December 19, 2015 Christmas light from prison
Recent Comments
0 | Leave a Comment
""How do we best communicate with others who think differently?"we listen to them, we respect ..."
Christiane Smith During Lent sacrifice ‘time’ not chocolate: ..."
"i think they should be allowed to bring in politics but lose their tax exempt ..."
Brandon Roberts Trump candidacy makes case for separation ..."
"Sadly, some evangelists are doubling down on the hate...."
Nunya Christians supporting LGBTQ children of God
"Religious freaks are starting to realize that bad publicity for their fraud might hurt their ..."
Myles Christians supporting LGBTQ children of God
Browse Our Archives
get the latest from
Progressive Christian
Sign up for our newsletter
POPULAR AT PATHEOS Progressive Christian
1