A.D. gets a new title and trailer, producers meet the press 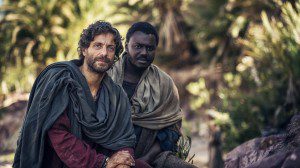 First it was A.D.: Beyond the Bible, then it was just plain A.D. Now the NBC series — produced by Mark Burnett and Roma Downey as a follow-up to their History Channel miniseries The Bible — has a subtitle again. As of yesterday, it is now called A.D.: The Bible Continues.

Or does the name go back earlier than that? I see now that the first trailer, posted back in November, has the full title, but I don’t recall seeing it in any articles about the series until yesterday, and it could have been added to the trailer later. I also note that part of the URL for the series’ main website has changed from “ad” — which is what it was when I linked to it four weeks ago — to “ad-the-bible-continues”.

In any case, the producers and several of the actors were on hand to promote the series at the Television Critics Association yesterday. Downey had already been there a few days earlier to promote The Dovekeepers, which will be airing on CBS on March 31 and April 1, just a few days before A.D. premieres on NBC on April 5.

One theme that came up was the “diversity” of the series, which has actors of African and Chinese descent playing first-century Jews. “We wanted people to turn on their television sets and see themselves in this story,” said Downey. Burnett added that they wanted the show “to reflect how the world looks, how America looks.”

That seems somewhat problematic, to me, as the story of Acts is largely the story of how the Church became diverse — branching out from its Palestinian (indeed, Galilean) Jewish core to include Hellenistic Jews, Ethiopian Jews, Samaritans and finally full-fledged Gentiles. Make the Church ethnically diverse from the very beginning and you lose the thrust of that trajectory. And needless to say, Americans and others should be able to watch a series and learn from it even if the characters don’t look like them. Imposing modern expectations on an ancient story for the sake of relatability is arguably a problem no matter who does it. But anyhoo.

Juan Pablo di Pace, the Argentinian actor who plays Jesus in the series, said he comes from a “Christian background” — his mother is a “religious painter” — and he said playing the part of Jesus was “a huge responsibility; it’s a daunting thing to do.” He added that playing the role has “changed me as a person.”

Burnett said about half of the series will be based on the Bible, while for the other half, “we colored in between the lines with what we think would have been going on.” Noting that this will include focusing on the political machinations of the Roman and Jewish leaders, he added: “It’s like taking ‘House of Cards’ and dropping it in the first century Jerusalem, A.D., adding in fast action scenes as well.”

The network has also released a new trailer for the series, though for some reason the YouTube version (embedded below) can only be watched in the United States.

You can also watch a Vimeo-hosted version of the trailer at Stars Entertainment.

January 21 update: Hollywood Jesus has its own TCA report, and they add the detail that Hans Zimmer will score this series, just as he scored The Bible and Son of God. Zimmer’s other Bible-movie credits include The Prince of Egypt and, arguably, The Da Vinci Code, which had brief flashbacks to Jesus and Mary Magdalene.

January 20, 2015 Watch: Trailers for the Oscar-nominated short films, which will be coming to theatres January 30
Recent Comments
0 | Leave a Comment
Browse Our Archives
get the latest from
FilmChat
Sign up for our newsletter
POPULAR AT PATHEOS Entertainment
1