Of Kings and Prophets — episode one

Of Kings and Prophets — episode one February 3, 2021 Peter T. Chattaway 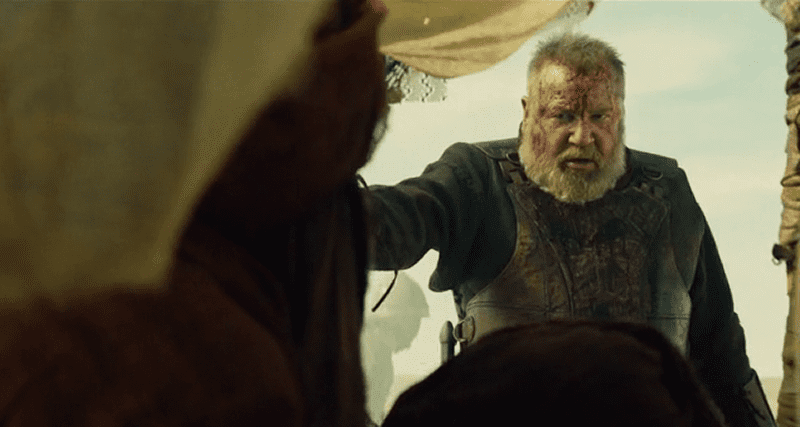 Of Kings and Prophets, a TV series about the biblical David and his relationship with the house of King Saul, premiered five years ago next month. It was cancelled in North America after only two episodes had aired — but the remaining seven episodes were shown in other parts of the world, and the entire series is now available on some streaming services (such as Amazon Prime in the U.S.), so I figured I should complete the episode-by-episode analysis that I began back then. The post below is adapted from this post. I also wrote a regular review of the first episode before it aired.

Synopsis. Saul, the first king of Israel, is trying to unite the tribes to defend the nation from the Philistines. To that end, he has arranged a marriage between his daughter Merav and a weapons broker from the tribe of Judah named Mattiyahu. But when he seeks God’s blessing for the marriage, the prophet Samuel tells him he must exterminate the Amalekites first — and when Saul fails to complete the job, Samuel declares that God will take the kingdom away from him. Meanwhile, a lion is terrorizing the countryside, and a shepherd named David tracks it down and kills it, which catches the attention of Saul’s other daughter, Michal, and his wife Ahinoam, who asks David to join the court as a harpist. Finally, the Philistine king Achish has Mattiyahu killed for conspiring with Saul — and we learn that Saul’s concubine Rizpah is spying on Saul for the Philistines.

Editing Samuel. The series skips past the stories about Samuel’s early life (I Samuel 1-7) and the role he played in making Saul king (I Samuel 8-12). It then cherry-picks bits and pieces from I Samuel 13-17 and rearranges the chronology somewhat.

This episode introduces us to various members of Saul’s household: his wife Ahinoam, his sons Jonathan and Ishbaal, his daughters Merav and Michal, and his concubine Rizpah. Saul’s wife and children — including up to three sons (Ishvi, Abinadab and Malki-Shua) who are not depicted in this episode — are listed in I Samuel 14:49-50 and I Chronicles 8:33, though Ishbaal (a.k.a. Ish-Bosheth) is not mentioned in the books of Samuel until after Saul’s death (II Samuel 2-4). The concubine Rizpah is also not mentioned in the Bible until after Saul’s death (II Samuel 3:7), but she did bear him two sons who were killed when David was king (II Samuel 21:8-12).

This episode also introduces us to David and his kinsman Joab. In the Bible, Joab is David’s nephew, the son of David’s sister Zeruiah (I Chronicles 2:13-16). Here he seems to be more or less the same age as David — but that isn’t necessarily so odd, since David was the youngest of either seven (I Chronicles 2:15) or eight (cf. I Samuel 16:10-11) sons, and if Zeruiah was one of the older siblings in the family, she could have been bearing children by the time her youngest brother was born.

Ahinoam says Saul has been working for years to bring the tribe of Judah into the fold. In the Bible, Judah had already contributed soldiers to some of Saul’s campaigns (I Samuel 11:8), and they contributed soldiers to his attack on the Amalekites too (I Samuel 15:4), though it’s worth noting that the tribe of Judah is singled out in those passages as though the men of Judah were separate from “the men of Israel”.

Gath is identified here as the “capital of the Philistines” and the home of King Achish. The biblical Achish did indeed live in Gath (I Samuel 21:10), and Gath was one of the five main Philistine city-states (Joshua 13:3, I Samuel 6:17), though it’s not clear to me that any one of those cities ruled over the others. In the Bible, Gath was also one of three cities where the giants known as the Anakim still lived (Joshua 11:21-22) — and sure enough, this episode introduces Goliath, who was from Gath (I Samuel 17:4).

One extra note about Gath: The Bible seems to indicate that Gath was conquered by Samuel before the Israelites had a king (I Samuel 7:14). But the Bible also clearly states that Gath was a Philistine stronghold during King Saul’s reign; it was there that David lived when he fled Saul and sought sanctuary with Achish (I Samuel 27:1-4). So either the story of Gath’s defeat under Samuel is a bit exaggerated, or the Philistines recaptured the city. I suspect the series won’t get into any of that back-story.

The Philistines control the production and distribution of iron and forbid its use in Israel (I Samuel 13:19-21), but they do send iron to nations on the other side of Israel with the help of traders from Judah, which is not yet allied with Saul’s kingdom.

Samuel seems to go from Gilgal to the capital city of Gibeah to confront Saul and kill the Amalekite king, but in the Bible, Saul took the Amalekite king to Gilgal and Samuel killed him there (I Samuel 15:12-33). Gilgal was one of the four cities in which the biblical Samuel held court, but his home was in Ramah (cf. I Samuel 7:16-17).

Notably, the scene where Samuel disowns Saul does not include Samuel’s famous lines about the sound of sheep and cattle (I Samuel 15:14) or obedience being better than sacrifice (I Samuel 15:22-23). The Samuel of this series also doesn’t seem to “mourn” Saul’s disobedience the way the biblical Samuel did (cf. I Samuel 15:35).

Other scriptures. Although this series is based on the Old Testament rather than the New, an opening title card links the two by saying that the story takes place “1000 Years before Christ”, which is accurate, if approximate.

Saul says the Amalekites attacked the Israelites in Moses’ day “ten generations ago.” The attack is described in Exodus 17:8-16, and the biblical geneaologies indicate it may have been more recent than that. For example, the leader of the tribe of Judah in Moses’ day was Aaron’s brother-in-law Nahshon (Exodus 6:23, Numbers 2:3), and Nahshon was only five generations removed from David (Ruth 4:20-22).

Ahinoam says Moses called for punishment for the Amalekites when Israel was at rest from its enemies (Deuteronomy 25:17-19) — and right now Israel is not at rest.

Samuel tells Saul that God “made you in his image.” In the ancient Near East, kings and even priests often said they were “images” of their gods, but Genesis 1:26-27 and 9:6 make the point that God created all of humanity in his image.

Fictitious elements. Saul tries to arrange a marriage for his older daughter Merav with a Judean trader named Mattiyahu. Mattiyahu is a fictitious character, but the biblical Saul did arrange marriages for both of his daughters.

Ahinoam mentions that Michal’s mother was a Cushite concubine of Saul’s. The biblical account gives us no reason to think that Michal was not Ahinoam’s daughter, but we do know that some ancient Israelites (such as Moses, as per Numbers 12:1) were married to Cushites, and that some Cushites went on to work for King David (II Samuel 18:21-32) and his successors as well (Jeremiah 38:7-13).

Geography. Ahinoam says the Philistines made it as far as Kadesh, and she says it exposes Israel’s weakness on its northern border. It’s not clear which city she’s referring to, but it would make more sense if she meant Kedesh in Galilee than Kadesh in Syria, which is where the battle scene from Exodus: Gods and Kings took place.

Gath is portrayed as a coastal city. Some Philistine cities were indeed located on the Mediterranean coast, but Gath appears to have been about 40km inland.

Mattiyahu is killed in Gath, and his body is found by Saul and his men being dragged behind a horse in the Nahal Arabah, a stretch of desert that runs along the Israel-Jordan border between the Dead Sea and the Gulf of Aqabah. Was the body dragged the whole way, two or three hundred kilometres from the Mediterranean coast?

Women. The female characters play much more prominent roles in this episode than they do in the Bible. Up until the final scene, when Saul walks in on him in the throne room, all of David’s dealings with the royal family are with Queen Ahinoam and her daughter Michal. Ahinoam has authority to forgive David’s family’s debt.

Also, it turns out Rizpah is not just a concubine — she’s a spy for the Philistines!

Sex and/or nudity. Mattiyahu and Merav have sex while their betrothal is not yet complete. Merav later bathes in a mikvah as a sort of pre-wedding ritual.

Rizpah appears to perform oral sex on Saul shortly before he attacks the Amalekites.

Joab teases David that there are easier ways to get women than by killing a lion.

Violence. Saul and his sons battle the Philistines at the beginning of the episode, and they slaughter the Amalekites — men, women and children — near the end. Samuel then beheads the Amalekite king in full view of the people.

David discovers that his sheep — including one whose head is almost completely severed from its body — have been killed by a lion. Blood drips from David’s hands. David sets out to kill the lion with his sling, and he ultimately succeeds.

People who can’t pay their taxes — which almost includes David — are flogged.

Mattiyahu is literally stabbed in the back — and through the chest — by Achish.

God talk. There is plenty of God talk between Samuel and Saul, but — surprisingly — there is none so far from David. Saul’s daughters are also prone to God talk: Merav tells Mattiyahu “only God could have arranged” their mutual passion, and it is Michal, rather than David, who says David killed the lion because the Lord was with him. 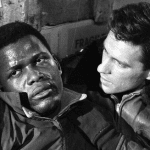 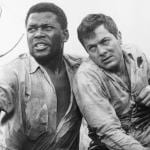 February 4, 2021 Sidney Poitier marathon: The Defiant Ones (1958) - Our Virgin Island (1958) - Porgy and Bess (1959) - All the Young Men (1960)
Recent Comments
0 | Leave a Comment
"I have neither noticed that much. I recenty read a leadership book inspired from Cyrus ..."
Hamid Mortazavi Cyrus the Great — a Persian ..."
""AD" stands for "Anno Domini", a Latin expression meaning "In the Year of Our Lord".So ..."
Peter T Chattaway The Chosen — season one, episode ..."
"Why does it say at the start of episode 3 that it takes place 26 ..."
Desiree Chamberlain The Chosen — season one, episode ..."
"What about Hellboy, The Grudge, Ghoulies, and Anaconda?"
45th Spiderbob Group VGCP When R-rated franchises go PG-13 …
Browse Our Archives
get the latest updates from
FilmChat
and the Patheos
Entertainment
Channel
POPULAR AT PATHEOS Entertainment
1