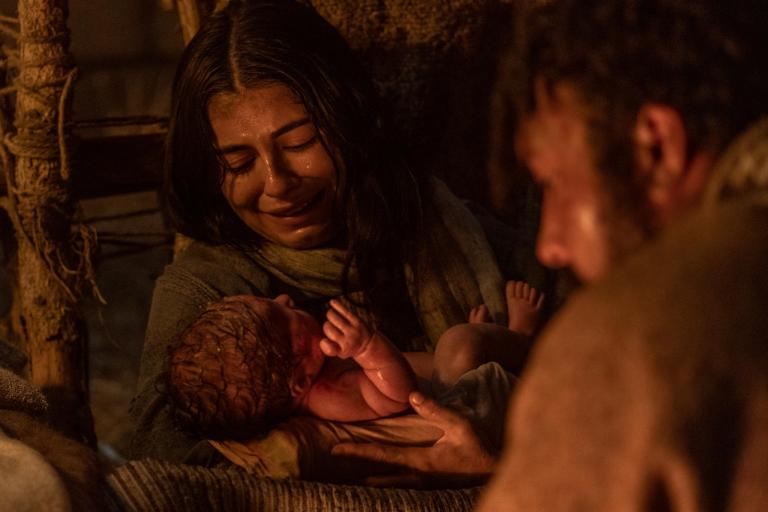 Christmas is a big deal in the world of The Chosen.

The series began with a short film about one of the shepherds who saw the baby Jesus. The first episode of the series proper began with a prologue in which a young Mary Magdalene gazes at the Star of Bethlehem with her father. When Jesus’ mother returned to the series in Season 2 – following her single appearance at the wedding in Cana in Season 1 – one of the first things she did was talk about the birth of Jesus and what it felt like to be his mom. And when the world went on lockdown last year, The Chosen produced a full-fledged Christmas special, with musicians and spoken-word bits, and released it on social media.

Now it’s time for yet another Christmas special – and this time it’s going to the big screen. Christmas with The Chosen opens in theatres across the United States tonight and will play for about two weeks — and, what’s more, it includes a brand-new episode that ties the original short film closer to the series as a whole, and hints at things to come.

The new episode, called ‘The Messengers’, takes place both before and after the main events of the series. In the future, specifically AD 48, Jesus’ mother Mary (Vanessa Benavente) is apparently near the end of her life and wants to send a message to a writer named Luke, who has been interviewing people for his gospel. As Mary dictates her story, the episode flashes back to the events of 4 BC, when Joseph and a much younger, very pregnant Mary (Raj Bond and Sara Anne, reprising their roles from the original short film) arrive in Bethlehem and cannot find a place to stay.

Those who have seen The Chosen will recognize the basic format here. The conversations are filled with nods to scripture, people do sneaky things to get around the authorities, and the overall sensibility wavers between reverence and familiarity, between sanctity and mundanity, sometimes within the same scene: no sooner has Joseph complained that the innkeeper is full of “bull droppings” than Mary, watching from a distance, prays to God and the camera frames her face in a way that is downright iconographic.

Fans will get a kick out of seeing both of the actresses who have played Mary do so in the same episode for the first time ever. (It’s a little like seeing Claire Foy return to play the young Elizabeth in The Crown, after Olivia Colman took over the role.) And fans will definitely be buzzing with the introduction of at least one new character who plays a big part in the gospels, but is seen here long after the gospels came to an end.

I’m avoiding spoilers for now, but I hope to analyze ‘The Messengers’ more closely once it is available to stream. For now, I will simply quibble with one or two historical points.

First, the scenes set in AD 48 play very strongly on the notion that the Church is enduring persecution everywhere, and the language sometimes feels like something out of a 20th-century spy movie: people hold meetings in “secure locations”, Roman soldiers ask travelers for their “papers”, etc. But the scenario described in the book of Acts at this point in time – just a few years after the death of Herod Agrippa in AD 44 – is not quite so dire. Yes, there was some friction with the mobs here and there, but nothing like an organized government crackdown.

Second, the episode plays on a popular notion that the “swaddling clothes” the baby Jesus was wrapped in were part of a Jewish ritual for inspecting sacrificial lambs. A quick Google indicates that many Christian websites have made this claim, but there doesn’t seem to be any evidence for it in the ancient sources. (See here for one blogger’s efforts to fact-check this claim.) Still, it’s interesting to see these cloths treated like relics in a film produced by Evangelicals, who are not exactly known for their interest in more traditional relics.

All that being said, it’s kind of exciting to see a “Jesus movie” that thinks beyond the traditional limits of the genre and pulls together so many texts while playing with things like continuity and non-linear storytelling. (The series’ experimentation with various formats – from extended tracking shots to silent montages – has definitely been one of its strengths, especially in Season 2.)

And this episode gets full marks for being one of the few dramatic interpretations of Mary’s story – possibly the only significant one outside of word-for-word adaptations of the gospels – to include the entire Magnificat in its dialogue.

As for the rest of the Christmas special, I don’t have much to say about the music. None of the artists are familiar to me, except for the ones who appeared in last year’s special, and none of the songs made much of an impression except for Brandon Lake’s haunting ‘Gratitude’, which did stick in my mind for a few days after I heard it.

Visually, it may also be worth noting that, for a Christmas special, there is a striking lack of snow and whatnot here – presumably because the musical sequences were all filmed a few months ago in Utah, on the Jerusalem set where much of Season 2 was filmed. I suppose someone could argue that this is more “authentic” to what winter in the Middle East would be like, and anyway, there is some debate as to what time of year Jesus was born. But I figured I’d note this departure from traditional Christmas imagery.

As for the spoken-word bits, they mainly revolve around the different Hebrew names for God, and they spell out some of the themes that are embedded in the new episode (such as the claim about the swaddling clothes). They also lean heavily on the idea that God was “silent” for “400 years” between the Old and New Testaments, but that’s a highly debatable claim, for reasons I got into in my analysis of the original short film.

Series creator Dallas Jenkins also introduces the special by saying “the birth of Christ is the single greatest event in human history.” It’s up there, to be sure, but I’d have to give precedence to the Resurrection – it’s mentioned in all four gospels and throughout the rest of the New Testament, whereas the birth of Christ is mentioned in only two gospels and gets just a passing nod in one of Paul’s letters – and if we’re emphasizing the beginning of the Incarnation as a prerequisite of sorts to the Resurrection, then, strictly speaking, we’d have to go back even earlier than the birth of Jesus to the conception of Jesus at the Annunciation.

But hey, Christmas is basically a birthday celebration, and no one needs that kind of nit-picking at a birthday party, right? Christmas with The Chosen works as a fun bonus for the show’s fans, and – as the show’s first-ever theatrical release, with an episode that introduces new characters – it may be a sign of even better things to come.

I interviewed executive producer Derral Eves about Christmas with The Chosen.

November 24, 2021
Exclusive: The Chosen producer Derral Eves on the big-screen special Christmas with The Chosen: The Messengers
Next Post

December 5, 2021 Box office: Christmas with The Chosen is the week's top new movie
Recent Comments
0 | Leave a Comment
Browse Our Archives
get the latest updates from
FilmChat
and the Patheos
Entertainment
Channel
POPULAR AT PATHEOS Entertainment
1