My home county has been in the news all week, thanks to a “5 Pillars of Islam” assignment given at the local middle school.  Although parents are not upset that their children are learning about Islam, they are upset that the assignment had the children write and recite the shahada, the Islamic declaration that there is no god but Allah, and Mohammed is his prophet.

David French at National Review breaks down the legality of the Maury County schools actions:

As a legal matter, it’s clear that public schools can teach about specific faiths, including the religious tenets of those faiths. And they of course can test students’ knowledge of religious doctrine. At the same time, there’s no legal impediment to accommodating students who — quite reasonably — don’t want to write or recite words they consider blasphemous. Just imagine the media outcry if a school made atheists and Muslims recite the Lord’s Prayer over strong student objections.

David goes on to call out the absurdity of the preferential treatment of Islam by the school:

Putting aside the legalities for a moment, if the Daily Caller’s account is correct, then it is both absurdly PC and absolutely typical of modern public education that it would respectfully teach Islam while focusing on Christianity’s sins. If Maury County (or any county) wants to teach world religions, it’s not terribly difficult to do it in an even-handed manner. At a minimum, if you’re going to teach the doctrines of Islam, you can compare and contrast them with Christianity, Judaism, and other major faiths. Oh, and it’s not just Christians who’ve sinned in this world.

As a parent in Maury County, although my children go to a private Christian school, I think it is important that our kids are learning about all major religions.  However, it is dangerous when a public school white washes the history of one religion and holds it in higher esteem than the rest! 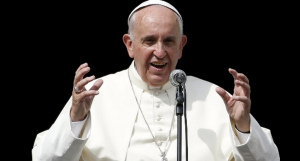 September 28, 2015 In Condemning Arms Makers, Pope Francis Sends the Wrong Message at the Wrong Time
Recent Comments
0 | Leave a Comment
Browse Our Archives
get the latest from
Politics Red
Sign up for our newsletter
POPULAR AT PATHEOS Politics Red
1