Jennifer Lawrence is from Kentucky.

(If you UK fans can actually count Louisville as part of our state.)

Recently, in an interview with Vogue Magazine, she said that Kim Davis — the clerk who refused to issue same sex marriage licenses — made her embarrassed of her home state.

“Don’t even say her name in this house. All those people holding their crucifixes, which may as well be pitchforks, thinking they’re fighting the good fight. I grew up in Kentucky. I know how they are.”

As for Lawrence’s political views, she says she was raised as a Republican but feels the party doesn’t support “women’s basic rights”.

As a Kentuckian (I grew up in Mayfield, lived in Georgetown, and attended UK in beautiful Lexington), and I’ve never seen encountered one pitchfork, toting, Bible quoting bigot.  Or even one without a pitchfork.

But Lawrence apparently was surrounded by them in Louisville.

Raised in the GOP, she left it because:

I just can’t imagine supporting a party that doesn’t support women’s basic rights. It’s 2015 and gay people can get married and we think that we’ve come so far, so, yay! But have we? I don’t want to stay quiet about that stuff.”

No word on how she feels about the millions of aborted babies who were snuffed out because of Democrats who love their abortion rights.  (Hey Jennifer, half of these babies were female!)

She also admitted to being a huge fan of Jane Fonda and not liking Donald Trump so much:

My view on the election is pretty cut-and-dried: If Donald Trump is president of the United States, it will be the end of the world. And he’s also the best thing to happen to the Democrats ever.

Hollywood’s blockbuster blonde comes to town this month with the final Hunger Games and David O. Russell’s Joy. So what’s next for Jennifer Lawrence? Buck the system, set up home, and try to find a date.

Jennifer Lawrence is an amazingly talented actress, and I can’t wait to see her in the next Hunger Games film.

But as a Kentuckian, I have to say.  She’s not “bucking the Hollywood” system, unless that now means, “blending into Hollywood and saying exactly what every single starlet says.”

As a Kentuckian who reportedly made $52 million in the past year, she could buck the system by standing up for a modest county clerk who simply was trying to live her life according to her faith.

THAT would be “bucking the system.”

November 12, 2015
Florist Sued by Friend for Refusing to Create Arrangement for Gay Wedding
Next Post 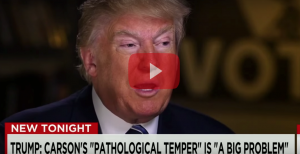 November 13, 2015 Trump Compares Carson to a Child Molester
Browse Our Archives
get the latest from
Politics Red
Sign up for our newsletter
POPULAR AT PATHEOS Politics Red
1